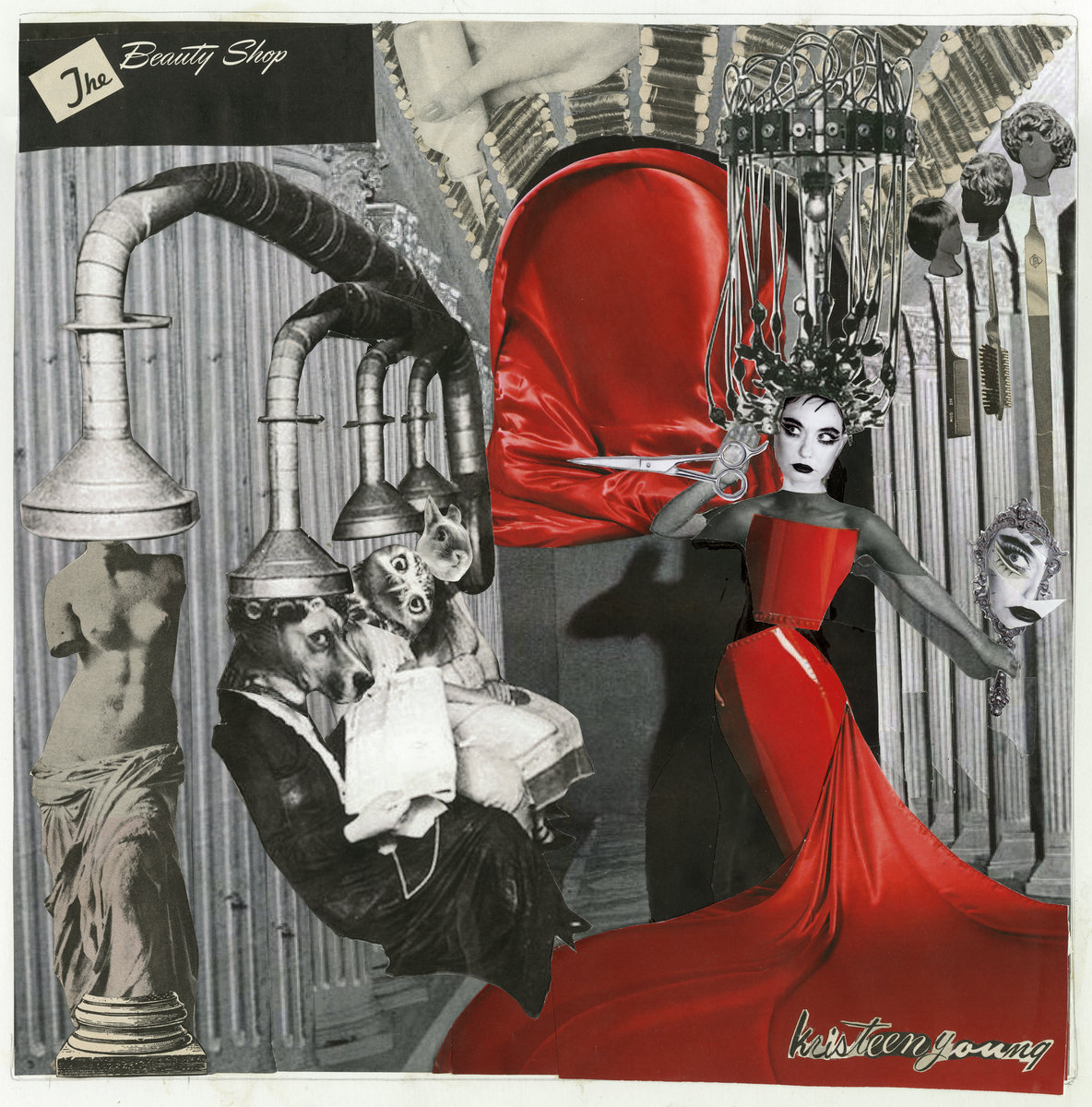 One makes amends constantly in this life. Whether at the ‘evolve or die’ level or to a seemingly more incidental degree there’s scarcely any distinction in terms of scale. Once the jig is up on whatever it is you’ve been neglecting, consciously or via simple ignorance or (usually) a complicated mix of both, the moment the truth’s revealed it’s time to suck it up and let it out, own it. So here goes.

While writing that recent piece about Shilpa Ray’s astonishing Portrait of a Lady, this specter of a memory kept kept haunting behind the words: I’d had the opportunity to ‘discover’ her years prior thanks to the gentle urging of Northern Arms‘ Keith Peirce. For reasons unknowable I’d not taken that advice and then there I was forced to come to terms all at once with my breath being every second taken away by the tempest before me. And lo and be-fucking-hold if I don’t find myself in exactly that spot again. Thanks to the tireless advocacy of a dear and trusted friend whom I’ve known for decades, the equally phenomenal, once-in-a-lifetime whirlwind talent that is Kristeen Young has been ‘on my radar’ for quite some time now, suggesting at every blip that that little mojo engine burning inside my brain would be lit up for days once exposed to even a modest infusion of Ms. Young’s incomparable drive and creative powers (be they audio or visual), abilities for the which the word ‘dynamic’ cowers in its inadequacy.

Now, I could claim time constraints and what too often feels an ungodly busy-ness as my excuse for what’s no less than a grievous oversight but that’s nearly always laughably banal and transparent – one makes time, when necessary, we all know that – but really, to be honest, I think I was just intimidated. Not by the in-your-faceness that generally foregrounds the music Young produces nor the vigorously uncompromising, outsized personality that animates her work with a neon intensity but rather the totality of the entire package, the somewhat vertigo-inducing scale of assets at play once you take a look behind the constantly rustling curtain (which, by the way, is more than likely on fire). This is not, in other words, a case of Pandora’s Box that’s being unlocked but instead something closer to the unstopping of Pandora’s Tsunami, a constant and (here’s the killer part) precisely orchestrated, fully captivating wave that, once experienced, you can’t turn away from so help you Jesus. The challenge as a writer, however, seemed to me to suggest a slightly different metaphor, that of confronting a gale force windstorm and attempting to translate its every howl and vexing nuance into a comprehensible narrative. Now, I’m not sure any of us wouldn’t harbor some doubts and as I sit here scribbling I’m certainly not immune but, as happens, if rarely – the above-mentioned Shilpa Ray a handy example – quailing is no excuse and the cost in terms of regret at having not (finally) covered this artist is just too great so in we plunge.

Shamelessly, brazenly but oh-so-brilliantly ‘out there’ and, most impressively perhaps, completely self-produced in every respect, Kristeen Young is what might result if you frankensteined Siouxsie, Lene Lovich, Hazel O’Connor and Toyah together into one frantic package then tossed in a touch of Klaus Nomi’s dramatic personae and a few pinches (at least) of, say Grace Jones and Lady Gaga and called it good. Well, no, you’d call it great, amazing even, and that’s indeed the word anyone sentient arrives at once they’ve arrived at the Kristeen Young crossroads. With no less than an operatic range at her ecstatic disposal and a blistering honesty of purpose in her presentation (not to mention a crack band that this time includes Tony Visconti and Donny McCaslin from Bowie-world joining guitarists Don Devore and Rob Durando and long-time drummer ‘Baby Jef” White), this is utter magnetism expressed in sound and vision and for all of you yearning for a good-for-you amphetamine your wait may well be over. While arguably most optimal to experience her work visually (hence the surplus of videos dotting this review), the happy fact is that, even when confined to sound alone, the tracks build themselves inside your brain into 3D models like alluring hyper-kinetic Lego constructions with human hearts that your ears can’t take their eyes off of.

Not uncharacteristically, Beauty Shop finds Young kicking off in a way as to seem to be simultaneously launching and diving into the proceedings, which is to say both with and without fanfare in that, yes, “Life Kills” rather immediately bares some significant stylistic teeth – thunderously percussive, detailed driving and busy, playfully dead serious and almost pop-Wagnerian – but it’s not like this is presented as some statement meant to grab your attention by the lapels (though it bloody well will), it is, rather, simply who she is, it’s her approach, how she does what she does and it’s at the very least marvelous and quite often just plain breathtaking. There’s a fearlessness to her creativity that’s been restlessly apparent from the very beginning back in 1997, a confidence and nerve and, frankly, genius underscored in this case by “Life Kills” seamless drop into lilting, dark, Kurt Weill-like ballad mode over its final minute. Most artists, we think it’s safe to say, wouldn’t dare take such a detour at the tail end of such a stormer of a track, too risky, too potentially off-putting, perhaps. Kristeen Young’s not one of those artists. Instead she seems to thrive on the challenge of getting it right, ‘it’ being the pith, the impetus of what’s driving her. This isn’t, in other words, some kind of esoteric virtue-signaling but rather, in compositional terms, is born out of authentic need. By every indication she’ll follow a song wherever it leads, find whatever it needs, in order to honor its emotional core, in the process keeping the listener as deliriously off-guard as she herself – and in fact any of us – might often feel. In a very real sense the act of listening to a Kristeen Young record is to be present as the artist’s process and its ultimate product are fused into one and it is, in a word, thrilling

Contributing to the impact of that thrill in The Beauty Shop‘s case is that, despite being designed as a song cycle touching on the range of human emotion and succeeding quite well in that aim, it also strikes as close-to-the-bone personal. There may indeed be a bare knuckles aspect forever at work in Young’s material but as with most artists this intense (few as there are) it’s not just pulled from the ether for the sake of it but arrives seriously imbued with memory and the emotional heft that comes with it and that’s especially true this time around. While the deft angular thrash and suggestive entendre of second track “Your Mouth is Going to Get You in a Lot of Trouble” may at first burst appear little more than a kind of absurdist, Grand Guignol hallucination of some lost Cindy Lauper track with an attention-getting title – and, in fact, it kind of is that – inside its bullet points and machine-gun complexity is both a declaration and warning to anyone talking nonsense within earshot, “Sara Get the Baby,” a scathing surrogate birth critique (look at that title again), though fundamentally frantic as fuck somehow also manages a sort of manic restraint, something akin perhaps to Mother Goose being interpreted by the Contortions while the relatively trancey “Sue Veneer,” moody and luminescent in its Youngian fashion is, as it actually happens, this bright bouquet of a gift offered to the Sioux barely hidden in the song’s title. Eloquent, a bit sly but unabashed, it’s the heart in her art laid bare for all to hear and as such not only anchors this album but could very well stand as an invitation, an ambassador of sorts, to the Kristeen Young aesthetic. One may be drawn by the drama inherent but one stays for the sheer humanity dwelling within.

That brilliant dichotomy, the deeply personal being carried forth inside raging operatic rock’n’roll and balladry, rife most times with cutting wordplay, is nowhere on more poignant display than on the title track. Entering into a biographical trance on the haunted footsteps of a gently reverbed bass (not Visconti in this instance, though; this track is all hers), Young immediately places us in her, and her mom’s, frayed snapshot past – “from Kansas, she fell / but, then again, didn’t we all?” – her voice, its timbre, both dispassionately narrative and visceral as hell, the production and arrangements such that, as the song gathers its dark headwind about it like so many windblown skirts, we’re taken to a Dorothean reality stripped of anything storybook, where nightmares are likely just nightmares and not fodder for nostalgia, where a carport gets repurposed into a beauty shop, where a toddler daughter gets plopped into a playpen as her scraping-by mother tries to make split ends meet while reciting Bible verse to her clients in the chair. Lengthy and unstinting, expansively concise as it traces the dance between objectification, poverty, vanity and love, “The Beauty Shop” (and The Beauty Shop) is nothing less than a tour de force of evocative, cinematic songcraft, a claim that tends to apply to Young’s work entire but in this particular track, and this particular album, feels fiercely honed to a sharp, defining point

There are many things to be said about the mainstream, few if any of them positive. Primary among them, we’d argue, would be the too-common tendency to take the prevailing murk of washed-out, warmed-over ideas, tweak rinse and repeat and trumpet them as the hot new thing (it’s with some irony, of course, that we have its omnipresent, stultifying shadow to thank for giving birth to – and continuing to nourish – the countless tributaries of the ‘alternative’ where the wilder things are allowed to grow). Thankfully, as per that parenthetical, there are those artists that, because it’s their only option, not only continue to swim beneath the radar but thrive there in gorgeous deflection of the current norms. All are earnest, some are great, a select handful are simply fucking amazing. You now know, if you hadn’t, which of those Kristeen Young is. If need be, if you’re new to her, let The Beauty Shop be your ticket inside, then hurtle backward as necessary. There are, we promise, few more scintillating rides.