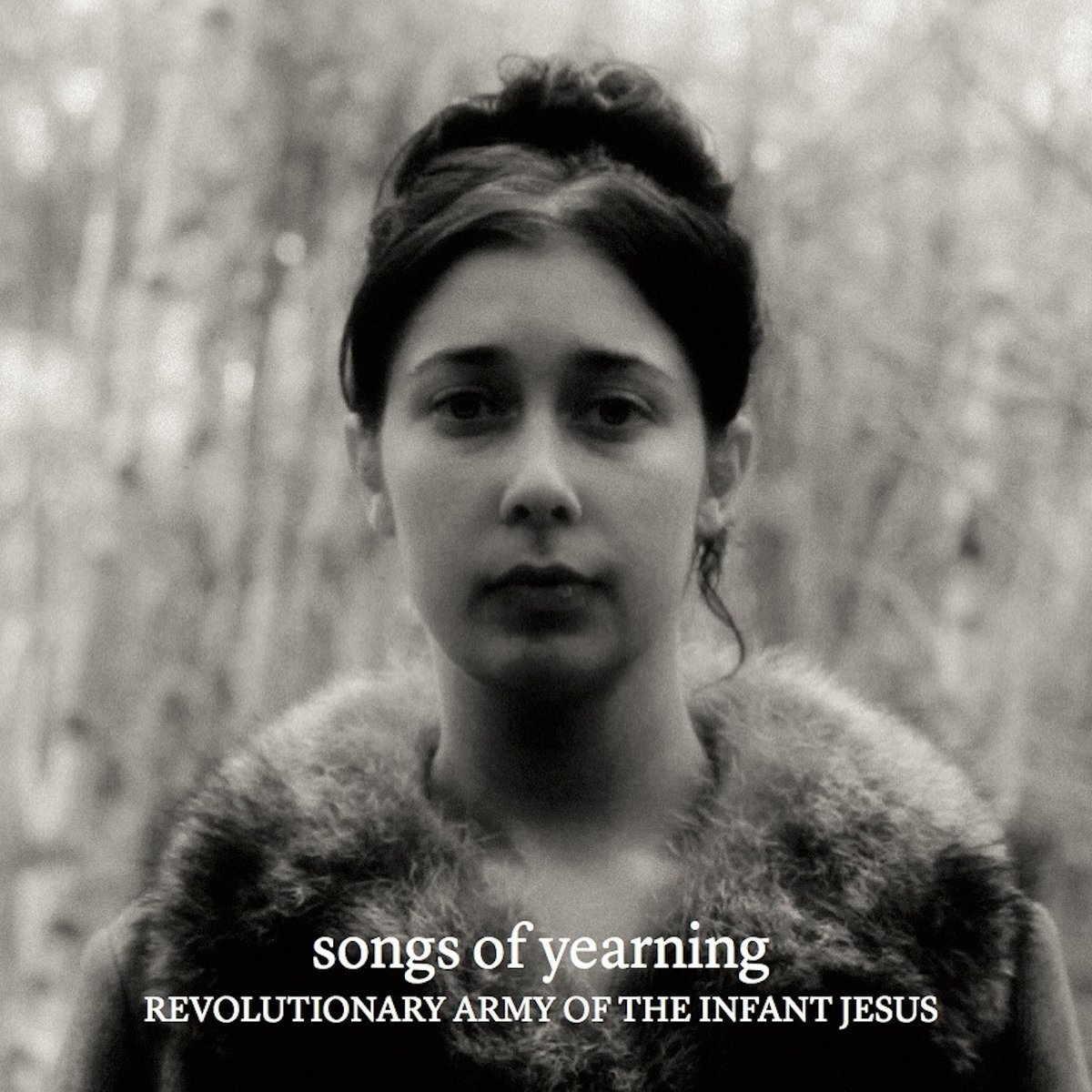 It’s simple, really. To listen to the Revolutionary Army of the Infant Jesus is to lose yourself in time. Or, to lose time entirely and fall into the richest abyss imaginable. In a way not unlike the spells induced by A Love Supreme or Nusrat Ali Fateh Khan at his most possessed, to listen to the Rev Army is to stand outside the generally agreed-upon strictures (and, sometimes, structures) of a modern-day musical encounter. So, OK, maybe it’s not really that simple after all. All I can say for sure is that, in terms of ‘pop music,’ there are few words available to convey the impact, the sense of transference that occurs in the course of one’s ‘consumption’ of an RAIJ record. Regardless, I will struggle to find them anyway, while accepting that perfectly applicable ones, such as ‘lachrymal,’ ‘mournful,’ ‘unremittingly beautiful,’ I’ve no doubt used in previous attempts to ‘cover’ one of this band’s full-lengths. As it happens, though, one finds that one doesn’t really cover a Rev Army release so much as it covers you, gently smothering you in grace.

Even just saying all this feels ephemeral, transitive, a cloud of breath evaporating into a cold clear morning. But then again, of course it would, matching up as that does with the RAIJ ‘experience.’ This band’s songs are integral to themselves, they live then expire in the moment, the human moment. Lithe and writhing like passing thoughts and sudden fears, there’s an emotional rawness to them that feels not raw but tender, like love in a hard environment, like love.

Back to those adjectives and adjectival phrases that I’m meant in my capacity as ‘reviewer’ to supply in order to convey to you why this album is an essential addition to your library, to your life. I can do that, or anyway can endeavor to do that, even as the tears at times well up and blur the lines before me as if some quietly devastating personal memory has just manifested behind my eyes and I have to take a sec to stop and clutch at the spiritual tenuousness such a moment never fails to conjure – as actually just happened, by the way, with the intensely moving “Avatars” which is, may the lord have mercy, the first track on the album proper. More on that later if I make it that far. I can comment on how, in that track’s immediate wake, “Celestine,” short and sung in French is, while no less poignant in its own way, lighter and brighter than its predecessor and that any conclusion you may gather from that that the RAIJ recognize the value of balance in the tracklist would not be ill-drawn.

They also believe, rather famously, in a scrupulous consistency. Lean in an expansive way (somehow they square that circle), there is nothing ‘throwaway’ in any of their work ever, no jauntiness, nothing at which one might be tempted to throw the word ‘singalong.’ Even here on songs of yearning their languorous, sparse, and bold take on “Ave Maria,” sung with a breathful, not-quivering devotion by Jess Main (against the backdrop of a reverbed electric courtesy co-producer Nick Halliwell), only syncs implicitly – at best – with any recording you’ve heard previously whether they were authored by a Neville or Schubert or fill in your favorite. Most of this band’s tracks, with a well-intentioned elusiveness, defy any notion of ‘hum a few bars’ familiarity. And yet, in something of a devout irony, the music the Rev Army make, in texture and melody, is as capable as any this writer has heard at imprinting itself on one’s consciousness like a ghostly, immutable memory.

While without a doubt dependent on the services of simpatico producers and guest musicians, it’s at this work’s conception stage that one can’t help but marvel. In atmosphere and tension, there’s something both novelistic and cinematic about it, these songs and their saturating emotions, so full of nuance and color, can feel as if they’re the untold narratives that hang in the air between the page and the screen, or, perhaps more accurately, glimpses of those unexpected epiphanies, snatched out of the pure blue silence, that connect one human to another, the unspoken imperishably spoken. In the same moment, this music can draw you out of yourself and into some disembodied spiritual dimension while simultaneously grounding you to your very core with a kind of meditative physical force. It can be little weird, in a sense, disorienting, but mostly it’s just fucking enchanting. How they do it is anyone’s guess but they do it, over and over again they do it.

On “Songs of Yearning” itself [for consistency’s sake, SEM is using standard capitalization guidelines for song titles though the band prefers all lower-case], the murmuring pathos of its cello speaking at least as eloquently to the verb in its title as the brief lyric (again in French) sung in Jess’s steadfast lilt; the accretive, emotive layering of “Vespers,” built on percussion piano and flute that resolves in a cathartic squall of electric guitar; “Miserere”‘s hypnotic descending progression, repeated like a trance and suggesting through its innate beauty that whatever mercy might be sought will soon be granted; the otherworldly hum of the harmonium that hangs above the dirge-like album closer “Prayer” like a plea made of mist, only ceding the air to the persuasive, double-voiced melancholy of the cello/violin exodus, everywhere on here the craft displayed is one of unassuming virtuosity that, for all its evident mastery, seems more indebted to the pursuit of a peasant grace than anything to do with sophistication. That said, it’s no less true that these songs, abundant in their self-assured restraint, are resplendent with a quietude and strength that in today’s cultural climate is almost too rare to measure.

Unshockingly, nocturnes, the bonus full-length (!) available on a limited edition basis with songs‘ in the LP and CD formats, could very well carry all the above superlatives to its own finish line. Though judged by the band to be distinct enough from its quote-unquote parent album to merit its own identity as opposed to integrating its eleven tracks into a double album – and at points one hears their reasoning, be it the svelte and damn near light-footed “I Carry the Sun,” the presence of a counterpoint male voice on “Like the Waters,” “Overture”‘s Reichian minimalism or the unabashed, triumphalist rockness of instrumental “Visions” – we can at least assert that few are the two-fers that could come within miles of rivaling what the Rev Army have offered up here.

The best – no, truest – art has no express purpose and yet bursts with it, not ‘despite itself’ but rather in the very pure – OK, purest – act of existing. And while we’re circling the concept, purity has some tenancy here. Certainly not in a righteous way but certainly in a devotional one. That quality, devotion, applies not only to their ethos as a band – they’ve played live but a child’s handful of times, and in keeping with their inflexible preference to let the music stand on its own they don’t do interviews – but also, quite clearly, in a textural sense.

As with a vast swath of western culture’s most moving and soul-resonant works down the last couple millennia, from poetry to prose to statues ceilings and opera, the Rev Army, to equal effect, ground their work in the sacred, albeit almost exclusively through the beautiful fragile doomed indomitable lens of the individual. Unnamed, stood in an unknown era that often feels bygone but could be yesterday, these are figures just like any, casting for hope, seeking solace, laying their faith in some level of redemption beyond what’s offered on this earthly plane. It’s as if there’s a wordless covenant between this band and those untold masses that are the yearning whispering embodiment of those that speak to us through this band’s songs, and while it might thus be said that they are giving voice to the voiceless, once heard in the lush and flickering, the lovingly conjured context of the Rev Army’s work, they in fact live and are voiceless no more. [songs of yearning available here]