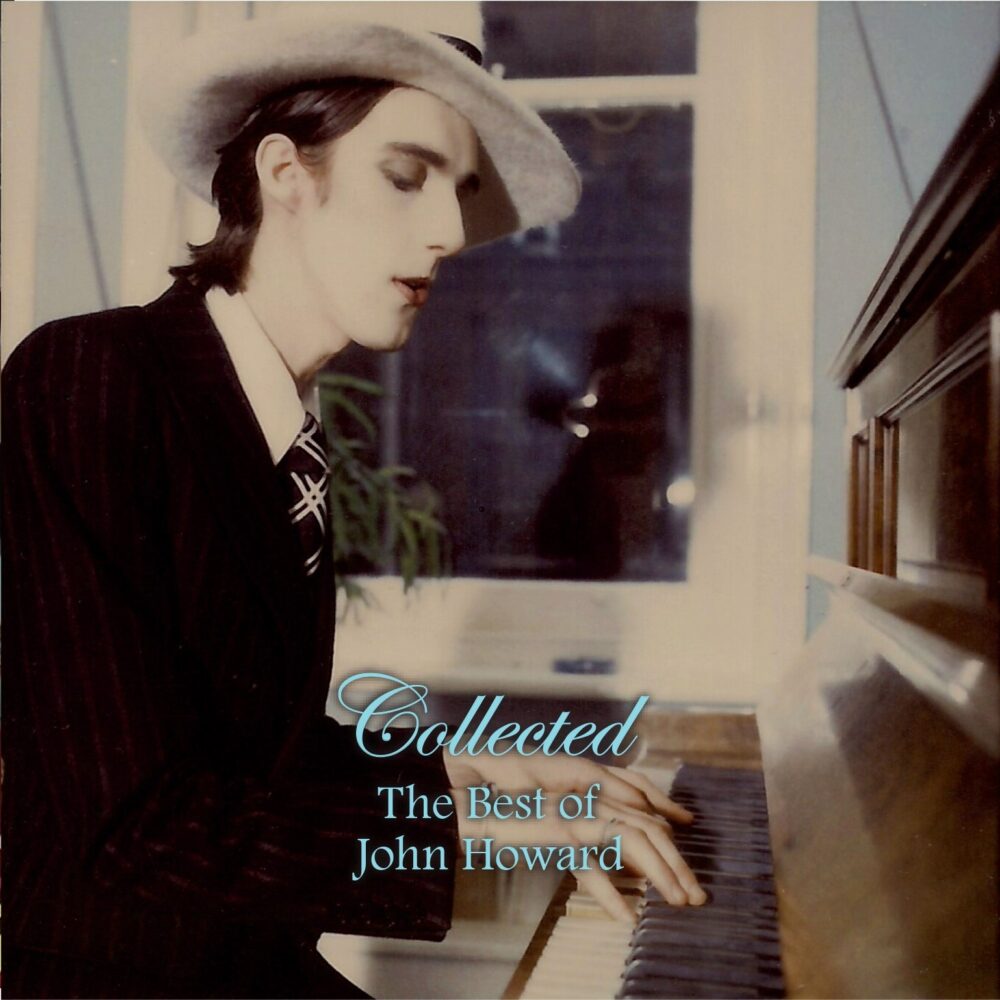 You just can’t win. It doesn’t matter if I’d begun writing about music thirty years before I actually took at leap in 2010 or not, there would still be a wealth of artists and bands I’d have missed. On the opposing side of that observation is the (likely quixotic) hope that if I had connived my way into a rocknroll writing gig when I was 24 – rather than one dropping into my lap at 54 – perhaps, somewhere along the line, I’d have become aware of musicians and songwriters that have been active at least that long whose works I’ve come to not only know but deeply admire over the last decade. While without a doubt I’m grateful to have ‘discovered’ them at this late date, it would have been helpful to have had some context. This is especially true when it comes to John Howard, whose name – and this is retrospectively astonishing – I was unaware of when Occultation Recordings founder Nick Halliwell sent me a copy of Across the Door Sill five years ago, a truly transcendent record which, that being the case, could only lead to that soul-searching question ‘Where have I been?’ and its natural twin ‘Who is this guy and what’s his history?’ To whatever extent I’ve followed up on that second question – the first is, as ever, unanswerable – I can now lay that quest to rest as Collected, released in May by Kool Kat Music, with its thirty-eight tracks spread equally over two discs, addresses nearly every corner of that curiosity with more grace and aplomb than could ever hope to muster.

Created with lovingly exhaustive care by fellow songwriter (and so much more) Edward Rogers, the selection and distribution of tracks, wisely we feel, largely eschews strict chronological order, favoring instead something more akin to the flow of a mindfully assembled mixtape, a ‘pentimento effect’ approach of sorts that surveys the phases of Howard’s long and somewhat unusual career path, extracting content with an eye and ear both meticulous and intuitive and laying them back down in a contiguous whole. It’s an option any of us would prefer when it comes to what is in many ways a retelling of a life – themes weaving in and out, older transparencies emerging from the blur of earlier ones left slapdash on the canvas years before providing a fresh and often telling new contrast – and a concept brilliantly adapted by Rogers for this project (Collected is so very clearly a labor of love), the choice of curator becoming its own stroke of genius equal to nearly any made in the studio.

As any such strategy should, this one adopted by Rogers has its hand strengthened at the off by a classic case of ‘the exception that proves the rule.’ As an introduction, “Goodbye Suzie,” the very first track from Howard’s very first LP Kid in a Big World, released on CBS in 1975, could not be more astutely clothed in the waistcoat of resplendent (if a touch cautionary) pop, an intelligent piece of emotional hitmaking stitched with a stylish precision and flair that had to turn the heads that heard it back in that era of Elton John. That it didn’t turn a number commensurate with Kid‘s quality is one of those archetypal open mysteries of the heyday music industry in which there are no answers per se only speculation. Here, beyond the all-too-typical diagnosis of major label mismanagement bordering on neglect, one could conjecture that perhaps the disco wave that, within a year, would begin crashing ashore just about everywhere around the world, washing the mainstream hordes away into a tumble of hedonism and funk might’ve had something to do with it but whatever the case, be it bad zeitgeist luck or label shenanigans, that would be Howard’s only full-length. A smattering of singles would follow through the first half of the 80s – the last, poignantly enough, sporting an A-side called “Nothing More to Say (But Goodbye)” – before calling it a day and turning his energies toward a successful A&R career for the next fifteen years, at which point so-called retirement would beckon as the millennium dawned and that should have been it, cut the lights drop the curtains end of story. And yet…

Because in essence it stares mortality in the face and tells it to fuck off, the trope of ‘a dream deferred’ is one of life’s most popular/inspiring stories. With John Howard, given the level of natal talent involved, it might well be better termed ‘a dream destined’ (even as one can cite a clutch of others similarly skilled that got left behind like so much industry roadkill), the undying light of craft and humanity inside those early songs taking thirty years to reach the audience they deserved. Thus the impetus for a career reboot and the result, when held up against what common expectation would likely be for an artist then in his early fifties, have been remarkable, not just in their Sisyphean defiance (fifteen or so studio albums, a live thing, collabs) but, far more importantly, the consistent eloquence and presence of the songwriting. It’s worth keeping in mind, as you follow the curious odyssey of John Howard’s artistic life this album traces in all its beautifully circuitous logic, that were it not for some motivated crate diggers expressing avid interest in that early work much of the what that interest spurred (which is to say much of the work contained herein) would not exist, at least not in such easily consumable form. As one sits and listens to Collected, it’s a thought best not fathomed.

As it’s arranged with such a deft conjurer’s touch, this double CD plays like it’s already on shuffle, albeit an uncannily selected one. From our count only seven of the thirty-eight tracks stem from Howard’s initial foray, including (aside from “…Suzie”) Kid‘s title track, a moving slice of elegant, lavish yet stripped-back piano pop balladry taking on the scurrilous aspect of show business in a way both precocious and prescient, a 1979 demo (“Loving You”) that by rights should have anchored a full LP, the horn-pocked “Maybe Someday in Miami” off the debut that sounds for all its short life like a show tune in search of a Broadway production, the ’78 A-side “I Can Breathe Again,” falsetto-rich and packed with enough disco punch and swirl to turn a Bee Gee head or two. Beyond those, Collected‘s predominant touch points tilt most heavily toward the earlier half of Howard’s return this century, a fact that, I must confess, greatly pleases this fan that, as mentioned, had to wait until 2016 for his proper introdution. As it turns out (with little surprise), that preceding run of albums, beginning with 2004’s Technicolour Biography and stretching to Hello, My Name Is in 2015, was, from the evidence produced here, no less noteworthy that what I found when I stepped across the Door Sill five years ago. What possibly most inspiring about it, however, may be the degree to which Collected chronicles this songwriter’s ceaseless drive to develop as an artist not in spite of his increasing age but in concert with it.

Even peppered throughout in that spry non-chronological order as they are, those post-hiatus tracks, for the most part, show that growth primarily manifesting in the realm of sound and production than in any sweeping upgrade in the level of songcraft. Which isn’t to say that that gauge has remained altogether flat – the arrangements have become more sophisticated (one might even say ‘mature’) and certainly “Family Man” from Kid might sit in somewhat uncomfortable juxtaposition with, say, “Becoming” off 2019’s Cut the Wire – just that Howard’s core songwriting chops have never been in question, the talent inherent abundantly clear. The added joy with this retrospective derives from being an intimate armchair witness to the arc of an artist’s evolution, an experience akin in its way to perching atop an expansive panorama from dawn to dusk and noting the subtle changes in light as the day grows longer.

Whereas the non-linear dispersal of tracks can often provide critical context to that arc – hearing “Believe Me Richard”‘s lively, Beatles-referencing sophisti-pop from 2013’s Storeys sandwiched between the aforementioned “Family Man” and “Loving You,” an aching heartbreakingly lovely demo from 1979, just John at the piano single a painful goodbye, underscores both his career-long creative through line and the dogged progress therein – the overall impression Collected imparts is just how potent this second-chance surge has been. The goal here then, as a result (and rightly so), would appear to be to shine much of the spotlight on Howard’s work during that remarkably prolific 11-year decade that many of us might have missed, myself included. Call it a floodgate opening, an avalanche, whatever rhetorical cliché applies but too often in such an unleashing the quality can get spotty the further down that road one travels but there is simply no sign of that being the case this time, Howard instead pirouetting from strength to strength and back again.

Pick anywhere – the jaunty existential pop of “The Dilemma of the Homosapien” adjoining “Dear Glitterheart,” lush and wonderfully wordy, the Bacharachian title track from Can You Hear Me OK? followed by “(Oh Dad) Look What You’ve Done” from Technicolour Biography, a piquant slice of close-in social commentary that at the very least emphasizes again how powerful just this guy at his piano can be, the passing 60s feel (harpsichord!) of “3 Years” or “Favorite Chair,” a tenderly baroque essay from 2011’s Exhibiting Tendencies detailing the perils of aging inside a relationship in, shall we say, a rather mordantly cheerful way (“hopefully I’ll remember who the hell you are“) – and have it confirmed: for anyone with a nuanced appreciation for the art of songwriting that privileges Laura Nyro over Billy Joel, that can switch from Lennon-McCartney to Lieber and Stoller without a second’s blink, such delights are bountiful in this two-disc compendium.

Though we suspect he’d demur at the suggestion with a modest bow of the head and a slight blush, writing and producing songs of this caliber is at the very gist of John Howard’s purpose in life. Call it a calling if you like – and certainly it seems to be nothing less – we’re just beyond happy that he decided to answer it again when it rang the second time.