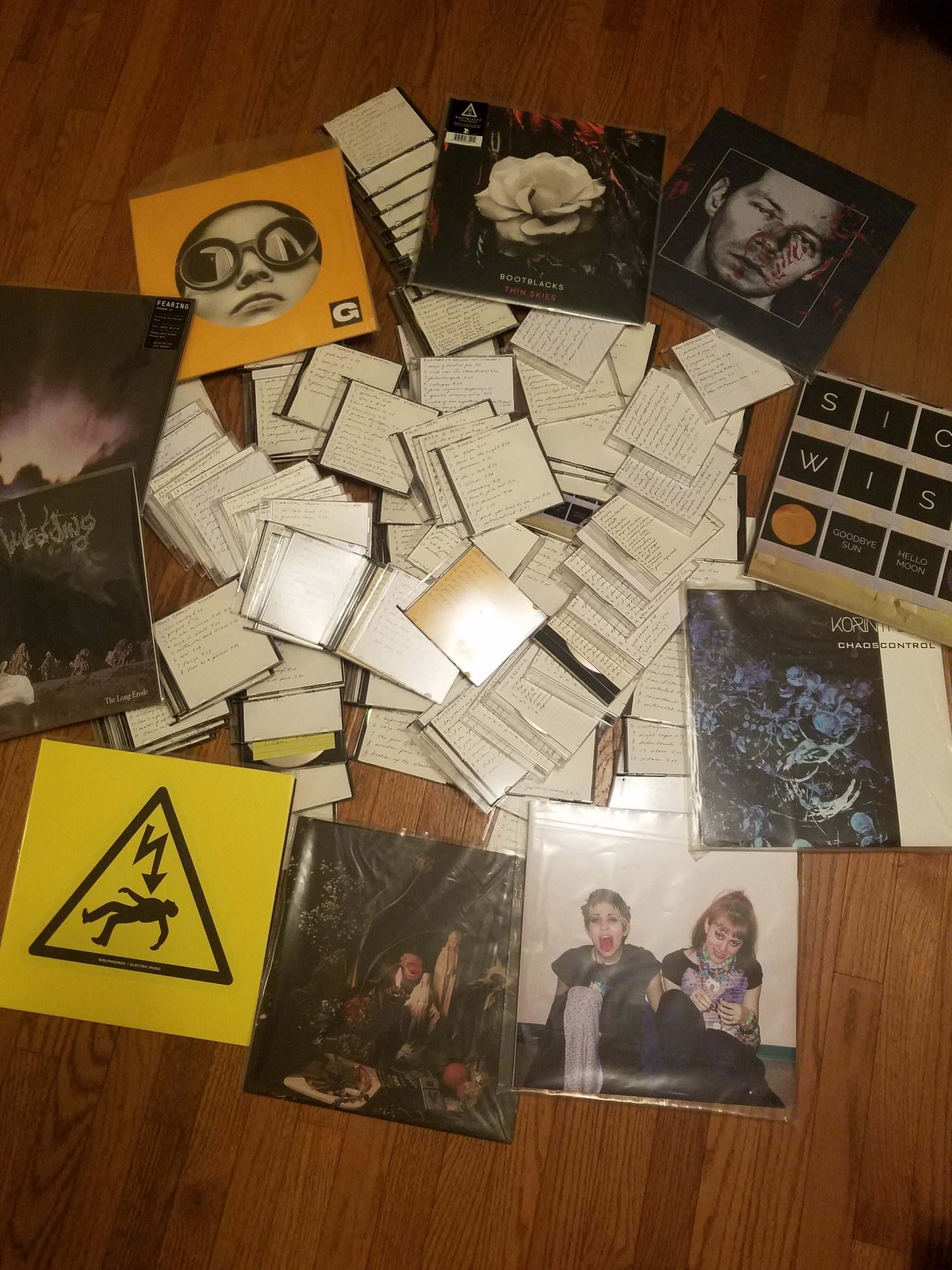 Up until fairly recently it seemed a tenable proposition. A magazine or newspaper polling its writers who were each polling their own thoughts and memories, consulting their notes, all to be collated, scored, then pulled together into a unified end-of-year best albums list. Understandably it’s an annual tradition that’s akin to a holiday ritual, beloved by generations of music lovers be they casual or hardcore. It is also equally – if not more – understandable that publications would be rue to the point of hostility at the suggestion that they drop or even modify such a reliably clickbait-rich feature. Thus we have little (read: zero) confidence that this essay will find much (read: zero) favor within the community of music writers nor, especially, editors, whose livelihoods depend on etc etc blah blah blah, none of which rebuts the plainly simple, quite obvious truth that, with the best Google-searched estimate putting the current monthly number of new album releases worldwide hovering somewhere north of ten thousand, the task, on every level, has long ago surpassed being virtually impossible and lapsed into the realm of the laughably ridiculous.

The prospect is, in a word, absurd.

To a degree, though, if we’re being truthful, it has been if not forever thus, at least a long time thus. The notion that any writer-critic, no matter how prodigious their intellect or capacious their curiosity, would have sufficient enough bandwidth to determine the ten (or pick a number) ‘best’ records released in a calendar year was always a bit of a suspect – though certainly unspoken – conceit. While less questionable, the staff model as mentioned up top, where, say, a top 50 is determined by adding together the cumulative one-to-ten scoring method applied to each staff writer’s selections, suffers a similarly-sourced credibility problem, the core issue of sheer abundance, the diversity and magnitude of what’s being left out still looming elephant-in-the-room-like no matter how much data are piled on top of it, and in fact, it being a collective of sorts, the issue could well be amplified by the echo chamber effect that today afflicts every corner of the opinion-making process be it public or private. No matter the approach, the best-of-the-year’s central defect is intractable and grows more glaring with every passing year.

Look, we could immediately dive in deeper here, examine the systemic mechanics that power this continued charade – the role of that modern-day click-based payola alluded to above and the label/musician favoritism that inescapably comes with it being not the least of them – but surely that would be a case of beating a decidedly dead horse. Whatever way one may argue for this tradition’s relevance runs headlong into complication-rich counterarguments that are of such blinding obviousness they should, in a sane and honest world, shut down the defense of this hoary old shibboleth well before the opening of the defender’s mouth. Primary among those rebuttals, though by no means a new one, is what to do about the apples/oranges nature of genres, a dilemma somewhat addressed by criteria, which is to say, what constitutes ‘worth’ in terms of a year-end list. Cultural impact? Pure artistic achievement that moves the needle forward no pun intended? Popularity? The editorial solution to this, of course (even as it doesn’t fully eliminate those same messy questions), is to break it down by individual genre. Once upon a simpler time that worked more or less satisfactorily when the menu of options was smaller, neater, more agreed upon. But nowadays? It’s become its own nest of vipers.

The internet hasn’t just created a music universe where access has become digitally unlimited – which, in itself, should make this best-of business obsolete – but has, in concert with the equally limitless potential of ever-improving software, accelerated at warp speed the evolution of ‘genre’ into increasingly more sophisticated hybrids, a process that was already in play as it naturally is in every art form. This (sadly in a way, joyously in another), makes even the genre-specific end-of-year list a mad jumble of possibility, the porous, constantly shifting nature of the boundaries causing greater blurring almost by the hour.

To that latter point I bring some personal perspective. Following the same reflex of tradition, it’s been my annual mission – the last couple of years with my XRAY FM show’s co-curator Victor Montes – to present in these pages the previous twelve months’ most notable darkwave albums. Now, already, as a genre classification, ‘darkwave’ is accommodatingly fuzzy, allowing for more straight-up post-punk to rub critical shoulders with synthwave, goth, deathrock and at least a half dozen more. By now, however, the layers of overlap, as once fringe-y outliers to what would have usually defined the genre joyfully filch this or that sonic signifier (‘that’ bassline foremost among them) have so multiplied that now candidates whose primary lodestars are industrial or EMB or ethereal wave or fill-in-the-blank are being swept into the mix. It’s this insatiable cross-fertilizing that led to my adopting the label “dark etc wave” as my go-to catch-all a couple years back and even that, I fear, is inadequate.

[Just to lend visual credence, the feature picture above is from my own 2020 accumulation – I tend to burn full-length downloads to listen to in the car or home stereo – and amounts to approximately 130 pieces. Missing are what I’d estimate are the other 150 or so titles that simply didn’t come my way as downloads]

So does all this mean that either SEM in general or the darkwave desk in particular will abdicate when it comes to end-of-year best-of lists? Speaking only for the latter I can say certainly not. But such pieces will, by editorial decree, be modified with some sort of caveat that makes clear that those picked and rated are strictly chosen from those we were able to hear. And even that caveat comes with a caveat: given the constant torrent of releases from week one to week fifty or so, any presumption that any such list is the result of careful, in-depth analysis of every album’s merits, well, that’s another scale that should be allowed to gently fall from your eyes (or ears, whatever). Don’t know how it is for everyone else, exactly – though have to assume it’s comparable – but it’s not rare for me to download five or six albums in a single night, a couple times a week. And those, of course, are (very graciously received) promos that in themselves account for a small fraction of what’s on offer just in the darkwave arena.

Now, with some inevitability, the sad ironic confession: I retain and shall forever retain a great fondness for the end-of-year best-of list. Genre-specific or not there are always, always, titles that I’ve either never heard of or have had no chance to hear, and like any music junkie, the chimerical impulse wherein even the slightest chance exists of chasing down another electrifying fix, yearning in passionate – and admitted – vain for the fresh euphoric YES!! first experienced in our budding prime, is inextinguishable. Therefore, writers columnists bloggers DJs et al, please, have at it. Just don’t fail to preface, in some fashion, that the entire exercise is a wholly subjective, limited-by-opportunity charade, a creaky comfy old sham for which we don our logic blinders and enjoy regardless.

Not, come to think of it, unlike Christmas itself.