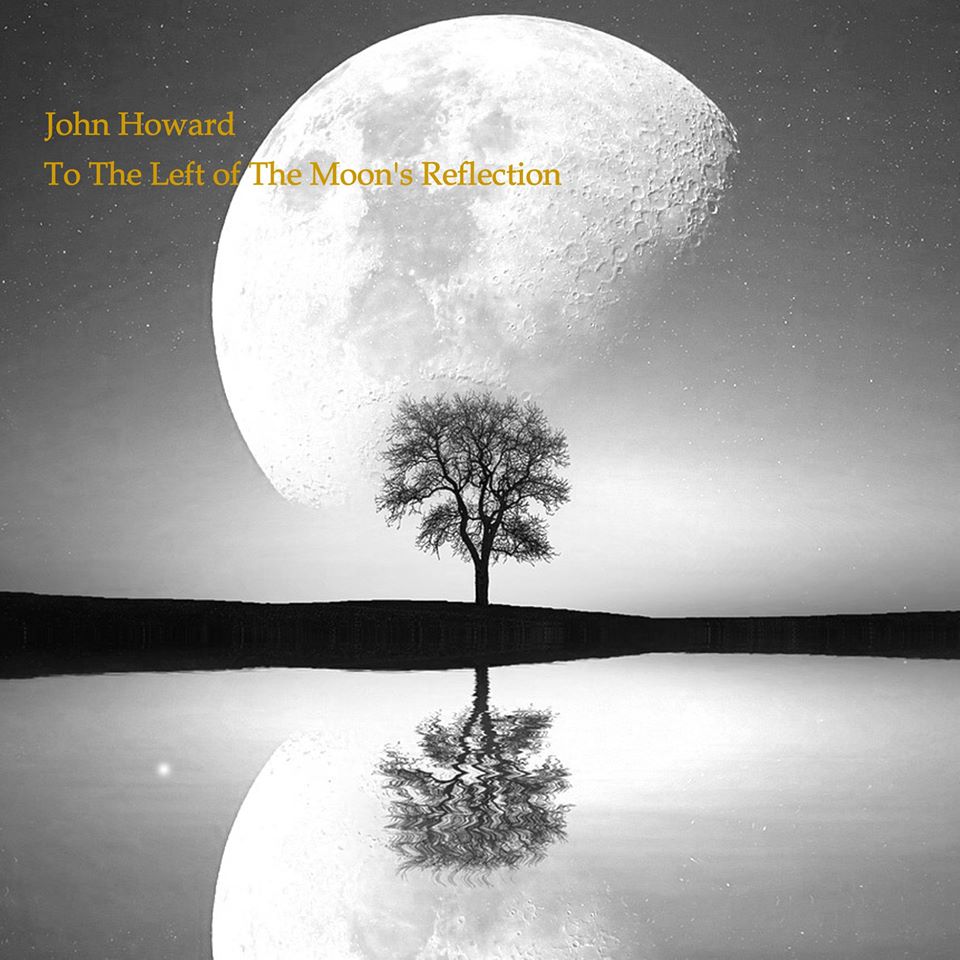 My wife and I bought a new-ish car recently to drive into retirement and it’s wonderful and comfortable and modern and reliable and all those things but possibly best of all, for the first time in literally decades, I’ve access to a functioning stereo while behind the wheel. Not to overstate, but the presence of such a pedestrian – and to most by this point obsolete – tech accessory as a CD player, right there at hand, is, by virtue of deprivation, an almost obscene luxury. Chuckle-worthy as all that may sound, the fact is, this otherwise mundane development paid nearly immediate and nigh on incalculable dividends when I chose to begin previewing the new John Howard album on my brief commute to work a couple weeks ago.

Summer morning, all that promise hanging in its light, scarcely a minute into the record when a small flight of Canada geese – a year-round species as common as crows across most of the US – rose off the river in silence and crossed over traffic and that one moment, with the bright, nimble shuffle of the record’s first track (the fatefully apropos “And Another Day”) filling the air around me, Howard’s age-seasoned but undiminished tenor as radiant and rich as the piano that accompanies, brought into swift – and unanticipated – focus the underlying dynamic that so often illuminates this writer’s songs from within: the innate majesty that dwells in the otherwise ordinary moments of this human life. John Howard would seem to be among those artists – Wild Swans’ Paul Simpson would be another, Van Morrison in his day, it’s an interesting list – whose work seems almost designed to seamlessly engage with the listener through the ambient inflections of the environment surrounding them (wherever they are) in ways that are, aesthetically, oddly symbiotic. Even now, writing this, the nine AM sun slatting through the back fence, striping the wheelbarrow left out mid-project, there is in that the quietest, most unforced beauty, the perception of which is surely – and purely – intensified by this music coursing through my ears. That may seem a precious claim but both the beauty and the music (and, one assumes, their authors) are indifferent to judgment. The moment, in short, doesn’t care to explain it – or its mirrored – self. It simply is.

This, then, is the level and type of enchantment in which Mr Howard operates, drawing on scenes and emotions we all recognize and making them resplendent, resplendent in sorrow, in joy, in wistfulness or regret. One might well view these songs as tapestries of a sort, simply woven then judiciously adorned at most – a gleaming chime of xylophone stipples that first track, for example – threaded of memory, of the many sinuous paths through missteps and inscrutable fortune, of the wonder of it all still being at its heart a mystery worth living, the whole cloth of this album shimmering for its allowed time as if just pulled fresh off the loom this morning.

Unflinchingly honest but buoyant, lush in its way but with a straightforward mein, To the Left of the Moon’s Reflection, if in need of genre classification, might be termed ‘singer-songwriter chamber pop’ and it excels and revels in its remit. From “Echoes of Pauline,” bedded in light strings and with the slightest accent of brass, revisiting one of the fractures of an impetuous youth in a gentle rush of clear-eyed nostalgia like a confessional Bacharach taking a stroll along that borderline between remorse and acceptance that sometimes only age can negotiate, through the sunnily ruminative, harpsichord-dappled “My Patient Heart” that presents as something of a singing postcard from that wise, resilient (and much-missed) mate you long to someday sit down with at a café again and chat around in brilliant circles about life, to “Injuries Sustained in Surviving” that trips along with a perhaps surprising jauntiness given its title (though, now we think of it, fatalism does quite often come with a wink and an existential shrug, doesn’t it?), Howard’s prowess with the form is on easy – if commanding – display. Good as those and the others uncited are, however, and certainly worthy of your attention if the album stopped there, it’s To the Left‘s final three tracks that may well leave a listener suitably breathless.

Whether intended or not as a capstone triad the three songs linked together take up the valedictory reins no matter the case. “Centuries” arrives as if just awakened on a quietly budding organ line – its baseline presence will remain throughout, a whispering cathedral undertone as light and necessary as air – before the vocal enters over a subtly soulful piano melody invoking a gospel tinge a la Billy Preston. The impressionistic touches, pastoral, reverent, enduring, are not incidental, seeing as standing at the song’s narrative core is an ancient tree, massive, immovable, silently loyal to those that have passed or huddled or lain in a warming sun beneath its spread.  As is Howard’s wont he finds in this trope a rich source for life’s reflection while, handily, that benevolent, rustling figure at the center also just happens to allow for the lyrical structure to spin around it maypole fashion. Thus, while almost legally bound to use the word ‘poignant’ here – very few writers can match his consistency in that regard – it must be mentioned as well how satisfying it is when the beauty of the craft mirrors that of the thing itself.

In “Centuries”‘ wake comes “Illusions of Happiness,” image-rich, densely contoured, the album’s most prolix track and all the more grand for it as Howard, buoyed by a constant and sonorous, almost churchy organ, reels off scenes and imagery that finds the allegorical flirting in dalliance with the quotidian (a natural match as all the good poets have long and forever known). With all of it couched inside an unstintingly hopeful melody it must be submitted that it’s among the loveliest – and most simply profound – accounts we’ve heard of our poor souls’ game, quixotic attempt to distill from the madness around us some sense of peace and fulfillment. Essentially an ode to the benighted hope that allows us to keep putting one foot in front of the other, it would have made a fine album closer had Howard not had one more elegantly restrained ace up his songwriterly sleeve.

In all but name the title track – “What’s that beam of light on the lake, to the left of the moon’s reflection” is its first line – “Water,” true to its placement, basks in, glistens with, denouement. Draped atop a repeating lullaby-like piano figure, the essence of the piece – basically an ephemeral ballad – grows ever-so-subtly richer by the minute. From the cameo appearance of a harpsichord to the soothe of an electric bass, the murmur and patter of treated effects and the low sway of eventual strings, it all gets layered in as Howard sings us through an extended moment of illumination, a causal revelation one might say, the imagery and his tone of barely subdued wonder echoing of the Romantics, and if indeed you’ve ever considered what a modern-day Shelley or Wordsworth would sound like sat behind a piano composing intimate pop songs you may have your answer. Held in that light – or in light of his entire career but especially his later work – the fact that “Water”‘s narrative arcs toward the phenomenological cannot be a surprise. It’s just about guaranteed that at some point along the length of a John Howard album the question will arise as to how he bends the tension of competing elements to his will, how the glancing everyday-ness of a thing – an observation, a thought – can be invested with a sense of moment and import that feels in context so wholly unforced, or how a track like “Water” can simultaneously appear both orchestral and stripped back, somewhat (at least at first pass) unornamental in its elegance. One could theorize and speculate for hours, we suppose, but we here at SEM attribute this seeming compositional sleight-of-hand to nothing more nor less than the sheer force of songwriting élan.

In that elite UK league of solo artists ‘of a certain age’ that includes the like of Bill Fay and Michael Chapman, one cannot exclude John Howard. And while many of the greats in that clubhouse follow an unwritten formula that pretty much goes ’emotive autobiography + parable + immutable melody = timeless classics,’ Howard, while no stranger to those last two factors, holds a much stronger affinity for the former. His songs, by now – and these are no exception – play like the epiphanies of a gentle if complicated heart that’s at peace with the decisions it’s been party to and, more pertinently perhaps, the  place they’ve brought him to. Now as ever life is unsettling, but there’s never not beauty to be found. To the Left of the Moon’s Reflection is, as is said, a case in point.