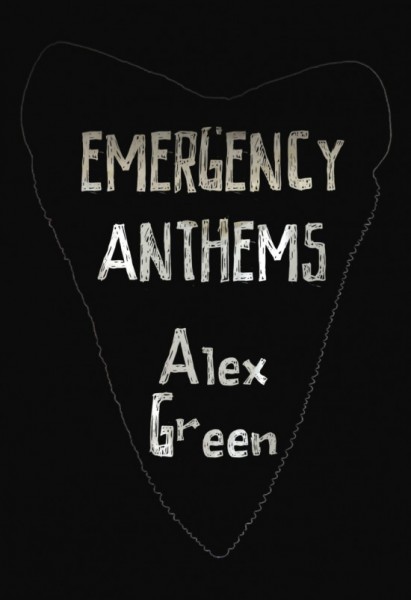 When I was in the middle of reading Alex Green’s beautifully desolate new book, Emergency Anthems (Brooklyn Arts Press), I had to pull myself out of the volume’s prose-poetry trance and watch Jaws.

It’s not that I needed a respite from reading (the intensity, passion, and earnestness with which Green writes are enough to make you want to read the book straight through, in one sitting). Rather, I desired to understand sharks, one of the central metaphors that Green – an elegant craftsman – uses to link the multitudinous prose-poems of Emergency Anthems and, in so doing, create a book unlike anything that I’ve read before.

I thought Spielberg could help – and he did. John Williams’ famous score for Jaws is, of course, ominousness incarnate, just like the repeated image of the circling shark fin, which the music accompanies. I was also reminded of the character Hooper (played by Richard Dreyfuss), who describes the shark as follows: “All this machine does is swim and eat and make little sharks, and that’s all.”

With the ominousness of Williams’ music and Hooper’s description firmly stuck in my consciousness, I returned to Emergency Anthems with crucial knowledge of the way in which Green employs intertextuality. Green effectively transforms the shark – the literal subject of Spielberg’s film – into a metaphor for the menacing power of the malaise, hopelessness, violence, and apathy that seemingly have pursued and devoured America.

Green’s intertextuality goes beyond Jaws. Emergency Anthems contains a social and aesthetic import, which is similar to that of Nathanael West and a few other key writers. West’s California-set Depression-era novel, The Day of the Locust, exposes the so-called “American Dream” as a fraud. And Joan Didion’s Slouching Towards Bethlehem, The White Album, and Play It as It Lays and Norman Mailer’s The Deer Park also hover over Green’s book, as does the early work of Bret Easton Ellis and Jay McInerney. While Ellis and McInerney exemplify the minimalistic prose style that Green executes so well, Didion and Mailer contribute examples of autobiographical, existential, and regional (read: Californian) despondency.

Digging deeper, Ellis and McInerney are important to Green not just for their minimalistic style but also for the way in which their mundane minimalism (especially in books like Less Than Zero and American Psycho) stands in contradistinction to the graphic violence that erupts out of nowhere in their books.

But, in Emergency Anthems, Green is up to something slightly different than Ellis and McInerney – and, I’d argue, something more effective. The trance-like malaise and despondency that Green creates (remember West, Didion, and Mailer) become so engrained with violence as the collection progresses that violence becomes normalized. That is, hopelessness and violence are such a part of today’s existential experience that they’re expected. And my guess is that one of the reasons that Green writes Emergency Anthems in such a hyper-real or, maybe even, surreal way is to illuminate the dangers of living in a society in which that which is terribly wrong and upsetting becomes, as Anthony Trollope might say, the way we live now.

Emergency Anthems clearly demonstrates that Green – a great moralist and ethicist – doesn’t want people simply to accept the fate that their country wants to bestow on them. But this doesn’t mean that Green is a didactic writer; rather, he’s first and foremost a poet, firmly in control of the metaphors that link the prose-poems and provide social criticism.

And the shark is only one of these metaphors, although it may be the most important of the bunch (characters like the Captain also have recurring, metaphorical significance). Whether an actual shark appears in a prose-poem or Green creates an atmosphere of menace without referring to a shark, that metaphorical fin is always in the water – and sometimes Hooper’s “machine” does just this, killing characters and their loved ones and marking bodies with indelible scars. But sometimes the fin appears in the way in which characters feel an unconquerable sense of dread as the result of a bad relationship or playing music that other characters simply don’t “get.”

Emergency Anthems succeeds brilliantly in linking the personal to the political. Better, it demonstrates the way in which one’s inner experiences of alienation simultaneously derive from and contribute to a heartless society in which the best people can hope for is to survive.

But, as Green warns, whether you can see the fin or not, the shark is always in your waters, ready to take away everything you love. Is this, he wonders, the world we created?

You can purchase Emergency Anthems here.