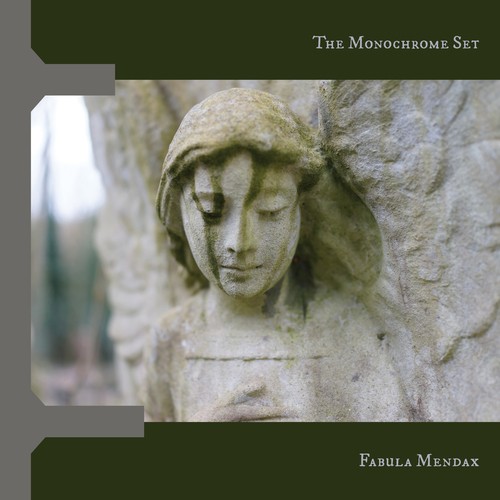 One is led to ask, what’s with these guys? Fresh off their first ever West Coast US tour – wildly well-received by most reports, as should be expected with a band much-beloved for over 40 years now – and a run of studio work over the past decade-plus that has seen the release of new albums at a rate to shame those a third their age, The Monochrome Set sat down for a sec to ponder their next step before just as quickly leaping to their feet and proclaiming “We’ve got it! We’ll make an album based on the 15th C. accounts of Jeanne d’Arc’s young runaway pal Armande de Page!” to which all murmured agreement in a chorus of sage excitement, toasting this burst of inspiration with goblets of mead.

Well, in any case, so the myth may reasonably go but whatever the no doubt more quotidian impetus behind this record the fact of its existence can barely come as a shock. This is a band, remember, that could literally interpret the contents of the Canton, OH phone book through the prism of their musical wiles and lose neither the reputation that has long defined them nor the critical applause that greets every TMS effort with an inevitability to rival that of death and taxes. Following, then, a rather irreducible logic, it makes sense that The Monochrome Set, simply by virtue of scope and fecundity alone, should, at long last, have bestowed upon them the title of post-punk Chaucers.

Whereas one may, justifiably, find such an anointment a tad facile, a little too clever for its editorial good, the fact remains that the band, over Fabula Mendax‘s thirty-four minute running time, prove themselves at the very least to be fearless – and quite possibly peerless – pop travelers. Certainly their ability here to adapt the gist of Armande’s manuscripts into a spin that’s both breezily profound and deeply satisfying betrays a command, a concise agility, that isn’t exactly a common commodity in today’s dominant short-attention-span marketplace.

None of which is to say that Fabula Mendax finds The Monochrome Set radically departing from the tight swirl of components that have marked them out as our favorite team of quirky minstrels from the start. That way they have of being accessibly extraordinary is still largely intact, the arrangements nimble and firmly grounded, the playing unfussy and exacting, the lyrical phrasing, sung by Bid in that tenor of his that’s actually a baritone or vice versa, as familiar and warm as a favorite wool scarf. It’s what allows them to get away with a track like “Eux Tours,” a mercilessly pitch black plea to see the ultimate punishment meted out upon one’s enemies and featuring such sunny couplets as ‘I want to see the rotten fruit / hanging from the joyless trees‘ that, played live, could easily be met in the audience by a sprightly two-step shuffle. While, overall, there’s unquestionably something cheeky in this album’s premise, it would, again, be a disservice to this band’s legacy to express surprise that they pulled it off.

From the outset, with the quietly acoustic glory of “Rest, Unquiet Spirit” that, aside from including in its, umm, unquiet mix a galloping harmonica – insert parenthetical exclamation point here – happens to be as dramatically moving as anything they’ve done, The Set have effectively hung a shingle above their stall in the literate pop bazaar that reads, in a precisely chiseled if elegantly plain font, ‘Mastery guaranteed.’ Be it the oblique John Barry mannerisms of “Throw It Out The Window,” the rain-soaked mystery that permeates “Darkly Sly,” “Summer Of The Demon” that in its restless restraint sounds to these ears like a lugubriously beautiful reboot of their eponymously-titled track from 1979, or “Sliding Icicle’ where, because of its – what else – slide guitar and its rough-and-tumble rhythm, one could well be tempted, for the first time, to apply the term ‘boogie’ (or at least ‘Muscle Shoals-like) to a TMS song, another, different question is implied: what can this lot not do by this point?

And here’s where, rhetorically speaking, things get a mite complicated.

Praise as a matter of shrugged expectation could perhaps be considered no praise at all, and yet with The Monochrome Set it must stand nonetheless because it is, despite the fait accompli nature of their long discography, all we have. After all, one cannot in good conscience gainsay the quality of someone’s work by lamenting the extent to which it continues its makers’ track record of buoyant excellence. ‘Unendingly superb’ is too weird a construction to ever gain legitimacy but in some cases – and TMS could well head a list of candidates – it may be difficult to avoid. It’s that quandary, then, that conundrum, that speaks to this record’s innate genius, as surely a project based on what’s essentially a teenager’s diary from the 1400’s is, in fact, the last thing we would have expected. The key, it would seem, to staying eternally relevant, is to keep one step ahead of your most fervent followers, a challenge they’ve met on Fabula Mendax with what appears a preternatureal ease.

‘Post-punk Chaucers’ too easy, you say? A bit too pithy? Pish. If anything, it undersells them.