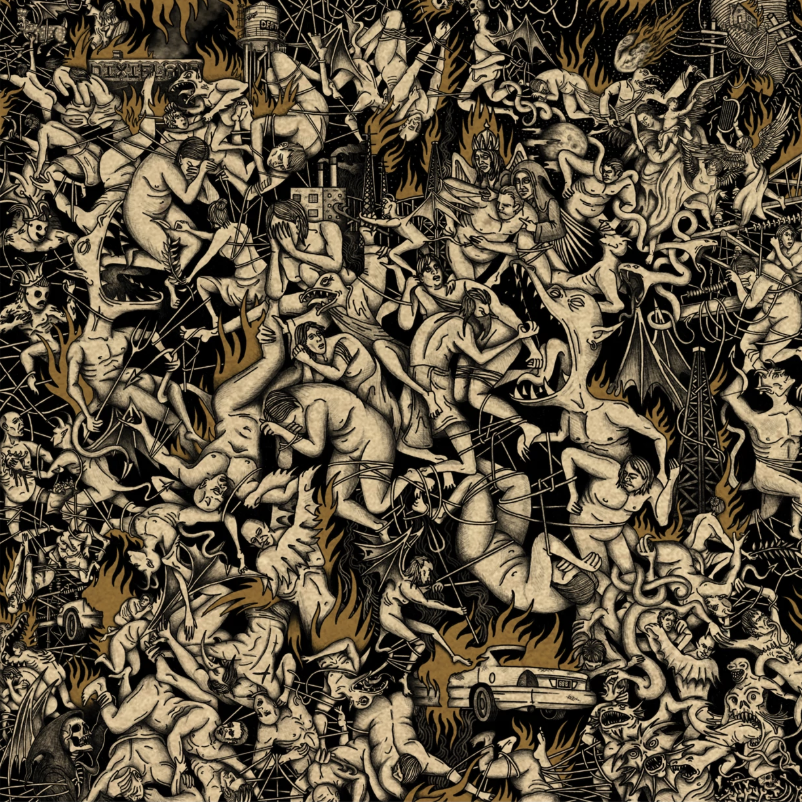 What is Hell exactly? Is it a torturous realm that one is sentenced to after a life of sin?

Perhaps Hell is more of a feeling that one experiences in daily life?

Greet Death grapple with these thoughts on their sophomore LP, New Hell.

“Circles of Hell” sets the tone for the album as the band marches its way through heavy distortion and pounding drums. Guitarist Logan Gaval sings about the paralyzing effects of depression, pleading for a lifeline: “I’ve been left behind / Returned to the grind / If I spoke my mind / I’d be crucified in my own hell.” The song culminates with a minute of snarling guitar and bass. It’s a moment so heavy the band is forced to pause for a beat only to come back with even more aggression.

This heaviness is Greet Death’s calling card. They’re a band that plays to its strengths without sounding monotonous. The Flint, Michigan trio’s sound is a blend of shoegaze, dream pop, and emo with just a touch of doom. Many of the nine tracks are structurally the same–they start quiet and diminutive and build to blistering peaks before burning out from the instrumental weight.

This is best exemplified on the album’s centerpiece “You’re Gonna Hate What You’ve Done,” a nine minute behemoth that eviscerates the listener’s ears with multiple guitar solos. Gaval and bassist Sam Boyhtari alternate lead vocals through the first half of the track, detailing the throes of apathy: “Embracing the consequence of the things I do / Could we prove it if I stopped sleeping in the afternoon?” There’s a self awareness that this personal hell of depression is no place to be, but there is also an inability to accept responsibility when it comes to addressing the situation. “Now you’re gonna wake up the sun / You’re gonna hate what you’ve done,” sings Gaval. It’s finger pointing in place of self reflection.

Greet Death are masters when it comes to creating a wall of sound, but they also show some pop sensibilities. “Do You Feel Nothing” comes across like a nastier version of My Bloody Valentine’s “When You Sleep,” opening with galloping drums and a scuzzy guitar lead that is impossible not to hum along with. Boyhtari places himself at a crossroads of getting better or delving deeper into sorrow as he sings, “What do I do if I don’t feel like / Getting high again? / Getting nowhere / Going nowhere.”

This dichotomy is central to the experience of listening to Greet Death–the instrumentation is simultaneously brutal and beautiful while the lyrics are dour and filled with anxiety. Like Hell, depression can seem never ending, but Greet Death looks to break free even if they don’t know how.