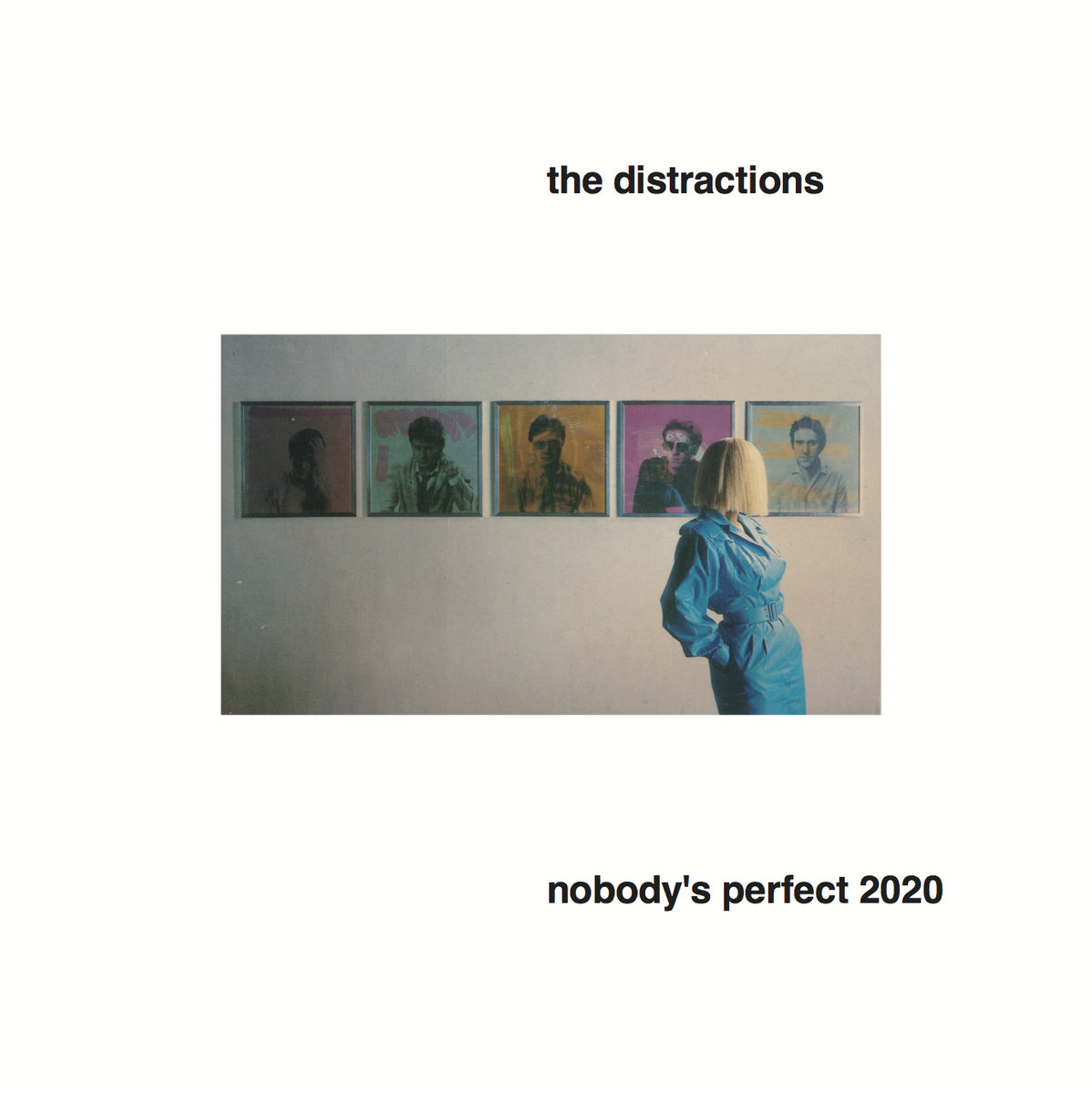 Back in 2011 when Alex invited me to write for Stereo Embers, a handshake agreement was made over the phone that assured that, pursuant to my saying ‘yes,’ when the new Distractions album arrived – it would only their second full-length, arriving 32 years after their debut and titled The End of the Pier – it would be mine to review. Our esteemed editor and founder generously agreed and onboard I came. As that promise played out I would in fact, be given what was essentially the ‘Occultation beat,’ ensuring that most every release from Nick Halliwell’s impeccable UK-based label would be laid at my feet. That assignment coincided with a ‘screen test’ of sorts as I was first asked to cover what would be the only album from Fall founder Martin Bramah’s then-project Factory Star, which I apparently passed (lengthy though it is) since very soon thereafter came the by-now fabled return of the Distractions.

With the recent, at-last reissue of the band’s 1980 Island Records debut Nobody’s Perfect – also on Occultation – we wanted to cover it in some way but I felt that any newly written review or essay could not help but be a redundant (and likely half-baked by comparison) retread of the first few paragraphs from that 2012 review of The End of the Pier. To the extent possible, they get to the heart of what it was about that band, that record, that meant so much to me (and a cultish league of others worldwide) at the time and during the ensuing ‘lost’ years. We’ve tacked on a few tracks at the end to help add context, along with a link for purchase – it’s getting pretty scarce, so you know – and one to the full review of The End of the Pier from which etc etc. Cheers…Dave

A few days after Christmas, 1979, I was on a plane coming home from London, a stack of singles on my lap. I had a zipgun haircut courtesy Rob at Lunatic Fringe, white vinyl Beatle boots a half-size too small, and the type of constant vibrating thrum running through my 23-year-old bloodstream as might be expected after two months in that place at that time. A miniseries of excitements and twists and adventures in creative penury backdrop that set-up but the story here is that stack of singles.

I had, of course, discovered Peel. On the edge of a bedsit bed in darkest Hounslow – when not at a show inspired by his show – I’d sit and listen those four nights a week to that little clock radio speaker blowing out my brain’s woofer. Thus did I hear “London Calling” the very first time it was broadcast, ditto The Cure’s “Jumping Someone Else’s Train,” “Transmission” by Joy Division  and scores of others. Thrilling as it was to hear the world debut of, say, “Eton Rifles,” it was the bands I hadn’t known before I’d landed at Heathrow that most enamored and intrigued. Whatever the reason – the startling D-I-Yness, the underdog energy – it was 45s by the likes of The Freshies, Home Service and Steve Miro that the kid in seat 14C, crossing westward over the Atlantic, lingered over the longest. Each was an artifact of accomplishment, a nugget with its own unique and shining facets. I felt the young pop archeologist mooning over his lapful of discoveries and as I sifted through them one in particular kept filtering back to the top of the pile: “Time Goes By So Slow” by The Distractions.

Built on an invincible pop hook and an equally immortal storyline – the poignant anguish of the left lover – it is the one song from that stellar selection of 45s that has, without exaggeration, replayed inside my head at least monthly, often weekly, since 1979. It was their third 7-incher, it turned out, and a couple more followed before full-length Nobody’s Perfect faithfully appeared in the summer of 1980. None of it was exactly groundbreaking, there were no grand new templates being forged, Paul Morley didn’t declare them rock’s saviors, Nick Kent and Julie Burchill didn’t get into a public slagging match over them. Basic verse-bridge-chorus stuff, really, with the odd solo thrown in like you do. The usual themes of young adult angst and wayward nights out. So why did almost everyone that heard them take them so thoroughly to heart and subsequently mourn the band’s short initial lifespan, despairing, as the years slid past, that that would be it for The Distractions?

It should come as no surprise that the question isn’t as answerable in words as it is in the music itself. As an album released in the madly rich maelstrom of 1980, Nobody’s Perfect wasn’t, umm, perfect – a handful of tracks feel a little rushed, the pressing left it sounding trebly and thin in places – and indeed it got a bit swallowed up in its time. But a couple of qualities assured that the album, and therefore the band, have not only not been forgotten but have been clung to as exemplars of a type sound that outlives the whims of trend and zeitgeist. The first is, in fact, exactly that: it’s aged well, edging into lost classic status as the decades have passed. Part of the reason for this, perhaps, is down to it never having been reissued (it had the relative misfortune of landing on the Island label, rather venerable at the time but it and many of its artists have since been sunk by the tsunami of corporate takeovers and mergers), leaving it a singular totem of a simpler musical time. Mostly, though, it’s the songs, the very character of that album – and again, by extension, the band, particularly core members Steve Perrin and Mike Finney – that ensured it would endure even as other records by supposedly more notable artists of the time, The Skids, Simple Minds, Psychedelic Furs to name but three, have, by comparison, fallen into a slight aesthetic disrepair. There was something cherishable about Nobody’s Perfect, it was one of those records you felt protective of. The music, in short – and here’s the second reason the record still stands – was easy to adore, and is in fact almost impossible not to. Those of us that knew it, that owned (or still own) it, could never forget it. Not a landmark album, it nonetheless held its own inside the Gang Of Four/Joy Division/Clash-sized shadows that obscured it from general view. It was that brave little glow down there that wouldn’t go out. Hopefully, in the paragraphs that follow, some clues will emerge as to what it is about this band that makes what they do so pleasingly unshakeable, and why that channel that runs from your ears to the heart of your heart is so thirsty for them, even if you don’t know it yet. [full review here] [Occultation Recordings order page here]