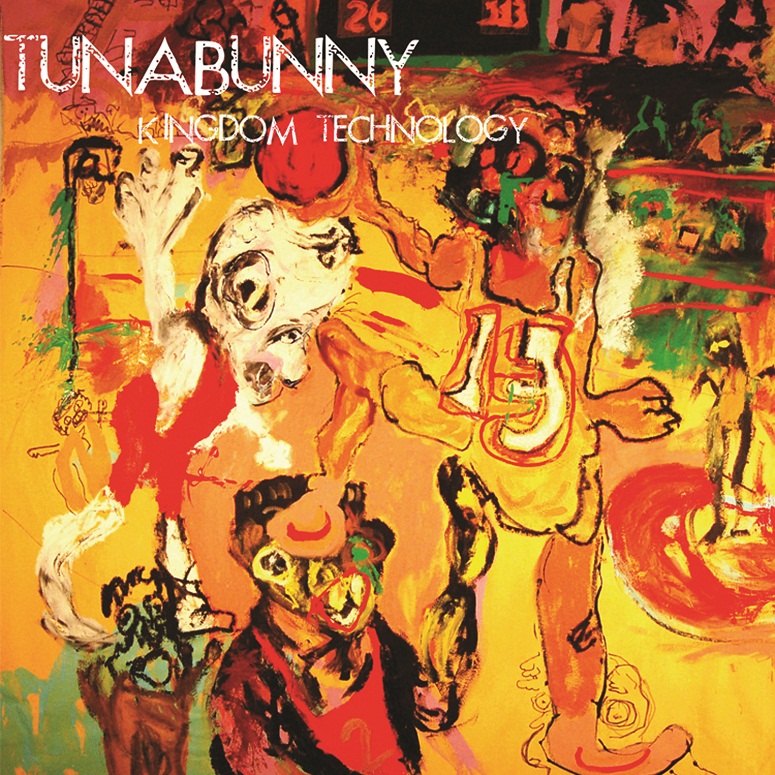 Some records press at you via the sheer force of dynamics, coming at you like feral jinns out of a dark and wooly wilderness. Some records press at you with a kind of ecstatic grandeur, presented by artists that may well be in their own version of a Sufian trance, firewalking into our heart. Some records press at you by the strength of their verdant imaginations, rife with vines and dancing snakes of coiled melody, with thatched arrangements that somehow manage to merge pulsing blood-red heartbeats with chrome-plated piston-strikes as if they were long-lost twins at last united. These are the type records that deal in outright sonic trickery, dishing out idiosyncratic complexities that flirt almost cruelly with their listeners’ ears and do so with what appears a casual ease. Some records capture us because every note augurs more good things to come, joyous even when they’re disturbing. Others take us in an all-encompassing, cumulative embrace, the wholeness of them – with intuition and forbearance, with a bumpy but sure grace – echoing the messy contours of human existence. These are records that don’t so much linger in our heads as install themselves in our psyches like an inchoate memory spawned in infancy. Kingdom Technology is one of those. Kingdom Technology, in fact, is one of each of these, assaultive in its way, seductive in its way, duplicitous charming secretive confessional fucked-up brilliant and swimming in surprise and treacherous delight.

Yes, it’s true, I’ve fallen in love with Tunabunny, once again forced to portray myself as a late party-crasher with stars and flaming zebras of adoration in my eyes (this is their third LP since 2010 after sharing sides with Hulaboy on a split the year before that). But, as always, I’ll take late over never and – also as always – rather quiver at the prospect of catching up to those earlier releases, the built-in advantage afforded the tardy that almost makes being deprived the last four years worth it. And if 2011’s Minima Moralia and the self-titled debut fall in expected line as developmental precursors to this record here, just now out on delayed release (another title pushed back by that bully Record Store Day), then indeed I’ve got some fascinating field trips in my future. Kingdom Technology is a fertile, daring, fully gratifying piece of work, a fractured masterpiece of rock pushed off its own deep end to startling and welcome effect, placing Tunabunny in a league with Deerhoof and precious few others. Let’s throw around some examples. 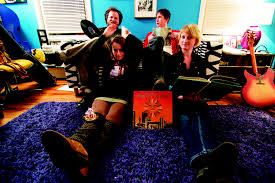 Grounding the detritus of secret alien rituals in a thick swamp-gas no-man’s land of earthly terrain, “Airless Spaces,” with its modulated Outer Limits synth, the trundled thud of bass and drum and wordless, disembodied double-tracked voices (guitarists/singers Brigitte Adair Herron and Mary Jane Hassel), is space junk plowing through the silt of the river delta. In “Save It Up” we get the perfect pop song for an oh-so-imperfect world, complete with a toppermost vocal hook in the chorus that’ll do ya for days, a wink of a disco ball beat down the middle (heroic drummer Jesse Stinnard who’s also responsible for recording and mixing duties) and a constant treated bass insistence that eats woofers for breakfast – and lunch, and dinner – the track in the end an earworm that kind of actually is a worm, a meaty one with a phat slinky wriggle.

The bass tendencies on Kingdom Technology do tend to run to the brutal, and there are treated thisses and thats all over the place, flurries and flights of distracting noise peek in and out throughout and yet the album is never less than riveting, is always organically fascinating. The only price of admission is to be welcome to a challenge. The rewards are manifest.

“Power Breaks,” rising up out of what sounds like the inside of a cough syrup overdose nightmare, soon grows into a brittle, propulsive, catawampus thing that throws itself forward in a fearless synth drum tirade, Scott Creney’s bass frolicking around like this is some careening chimpanzee joyride, the song out of control except it’s never out of control. There is, without a doubt, something breakneck about Tunabunny which they play to their gasping advantage. They’re like Swell Maps on accelerants, sharing that sense of unrestrained free spirits let loose on their own skewed vision of rock’n’roll, only, at least on this record, the band exhibits what might rightly be termed a ‘well-regulated shambles.’ There’s abandon inside here but very little recklessness, nothing gets away from them. Moving on. 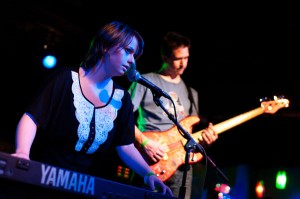 The criminally short “Good God Awful” is nothing less than the Fire Engines with an American accent. It’s followed by the slow systolic thrum of “Tête-à-Tête” that I suspect is what it sounds like hearing your host sing as you float inside their bloodstream – corpuscle rock – which in turn is followed by an almost sunny and certainly irresistible track called “Coming For You” that’s equal parts Pale Saints and Dum Dum Girls with a dash of JAMC if they were a 60’s girl group and is ripe picking for song of the month even if it, too, is painfully short (one could also call it a Scott Creney showcase, the bass a springy marvel) and that’s the kind of prodigious range we’re talking about here. The jumps would be jarring in less confident hands but on Kingdom Technology they come packed inside adroit and seamless segues, their connective tissue a slightly buzzy Tunabunny coating that shellacs each song in a claustrophobic intimacy one has zero desire to escape. “Empire,” meanwhile, is a beguilingly busy avant-pop collage that funnels a dizzy stew of elements – cigar box acoustic, disturbed strands of synthesizer that need professional help, tick tock percussion, even a damned Sinatra sample – into a glorious kitchen sink of a tune that against all odds you’ll end up singing to yourself over and over again and you really don’t want me to go on like this, do you? Because I could do this all day. “Bag of Bones” is urban tribal and darkly hypnotic – you might want to be careful with that one – “Chalked Up” is something akin to the Slits meet the Fall on the outskirts with, umm, added harmonica! And et cetera times infinity.

Thing is, there’s only one minor instance on this record where the band’s sense of adventurous meander gets the better of them and fails to pan out. “Not New Year,” with its murmuring bass, a sawing..something, and sibilant vocals in hushed declaratives wondering why the stars won’t come out to play before assuring us that “this is not a beginning,” needs a place to call its own and doesn’t quite find it, and yet I’d still choose to listen to that relatively – for Tunabunny, anyway – naff track than well over half of what I hear in the course of a normal reviewer’s lifetime.

And so will you. End of review. Buy it.