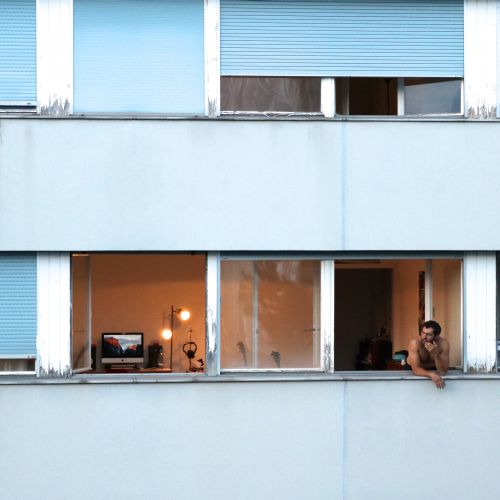 Lausanne, Switzerland-located singer, songwriter, and producer Morse recently dropped his debut single, “Cotton On Your Skin.” It’s a minimal, but seductive number that taps into a sultry groove and features Morse’s soulful vocals.

Call it alternative pop/soul if you must, but the track rolls out on its own distinctive hybrid groove, filled with what sounds like crisp fingersnap rhythms and other slow-burning, drum-like instrumentation. The self-restraint builds up a powerful tension, something that James Brown discovered back in the ‘70s. You don’t need ornate arrangements to make people listen and groove to the tune.

Morse digs that vibe and he puts on a one-man-show, for the song and its accompanying video. Morse is showcased in the video, bare-chested and sinuously moving to the tune. It’s an almost 4-minute glimpse of the man dancing around his studio and singing the song. It may sound contrived on paper, but when you see the video and realize that he’s actually in his own apartment-slash-studio, you will be sold.

“Cotton On Your Skin” is out via Irascible Music and available on all streaming platforms.

Morse kindly took some time to answer a few burning questions about his single, the video, and his alluring sound.

Stereo Embers Magazine: Hello Morse! Is that really you dancing in this video?

Stereo Embers Magazine: So, you usually dance like this when you make your music…?

M: Exactly, especially when I find a new idea I like. That’s something I wanted to show in this video clip; that moment of joy in the creative process, portrayed in a realistic way.

Stereo Embers Magazine: Do you self-produce all your music, where you spend most of the time in your apartment alone during the process?

M: I produce everything by myself, except the mastering that I do with Alain Ernst, a very fine and sensitive person that I like. I do the mix by myself. I see it as being a part of the creative process. I really like experimental electronic music. The idea of creating sounds, landscapes, textures; the materialistic side of sound. I am a machinist; my computer is my workshop.

Stereo Embers Magazine: You sing in your natural range which actually is not typical these days, with many male singers pushing their voices into a higher range. What made you decide to stay more subtle?

M: I do want to explore my range. I usually have a low voice, but I like to sing high like Motown singers. In general I try to have very pure and sincere vocals, even if they aren’t perfect. I don’t like effects or trying to copy other people. I simply try to be myself.

Stereo Embers Magazine: Can you take us through your production process and maybe tell us how “Cotton On Your Skin” came to be?

M: I wrote this song when I started this project, so it’s a pretty old one. I was trying to build on the beat. I was learning how to compose music on a computer (I am still learning). I then started singing, had fun, and the vocals came to me quite naturally, before adding the rest. There is a little guitar and percussion solo throughout the track. I try to always have something going on for the song not to be repetitive.

Stereo Embers Magazine: I really enjoyed the video! The idea is simple, but it really works well with the song. It sort of reminded me of this ‘70s Coppola film called Conversation. Have you seen it or know of it?

M: I don’t know it, no. My first idea was to dance. When I climbed onto the scaffolding on the opposite building and I saw my building, I thought it was perfect and should be filmed from there. I told a good friend in a bar, and he went there with the idea of zooming in to give it the dynamics. He knew the experimental movie Wavelength by Michael Snow. We did a numerical zoom, which is sort of cheating, but I couldn’t afford a real optical zoom.

Stereo Embers Magazine: Are you currently working on a full-length? If so, where are you at in regards to writing and recording?

M: I now have eight tracks that I play at my concerts. I could finish them all and release an album, but I would prefer to release two other EPs first. Then I will think about an album. I feel like I still have a lot of things to learn before that.

Stereo Embers Magazine: Watching you dance like that in the video makes me think that you like being on stage…

M: When the audience is receptive and reacts to my music, I really love it! I then give everything I have. It really depends on that. I had great concerts where we shared of lot of love and positive energy. I now want to add more energetic songs to my set list to really be able to dance!

Stereo Embers Magazine: When can we see you live?

M: My next live show will take place on November 16th at the Salzhaus in Winterthur [Zürich, Switzerland].

Find out more about Morse