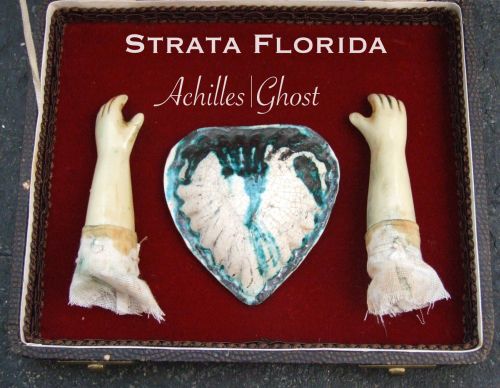 Those of us who followed the shoegaze phenomenon that swept the UK during the 1990s know about the dreampop/shoegaze outfit Swallow.

Core members Louise Trehy and Mike Mason were signed to 4AD and released their shoegaze/dreampop oeuvre Blow in 1992.

Fans waited with bated breath for more from the duo, and got it in the form of a remix LP titled Blowback, and the Hush EP from 1994 when they jumped to Rough Trade.

We won’t rehash the past that led to Trehy and Mason’s/the band’s break-up, but suffice it say, they went their separate ways. Trehy exited the music field altogether for a long while, while Mason continued on with a variety of music projects.

Trehy graced the music realm again in 2013, tentatively releasing some demos and garnering glowing feedback, and then signed to Texas-based label Saint Marie Records that specializes in dreampop and shoegaze-oriented music.

Its been a few years since Strata Florida unveiled new tunes, but that’s happening this coming Friday, February 5th, with the launch of a 2-track single.

And there’s even more exciting news: Trehy and Pavli are joined by Mason on the songs!

Trehy explains the fortuitous events in her own words (posted at Facebook and edited below):

“It’s a long time since I released any music… Pavli came up with melodic baselines…Then (I never thought this would happen), myself and Mike Mason from Swallow made up.”

“Mike got involved with us and recorded and produced our new songs as well as adding keyboards to them. We are releasing 2 tracks and a limited edition cassette art single next week.”

“Myself and Mike will start going through all the old Swallow demos at some point… to see if there is anything worth releasing from the archives.”

Ahead of the single drop, Strata Florida has released a captivating performance video (interspersed with some of Trehy’s animated artwork) for one of the tracks, “Achilles.”

She of the breathy, dreamy vocals that diffuse into the starry skies will transport you to another world…