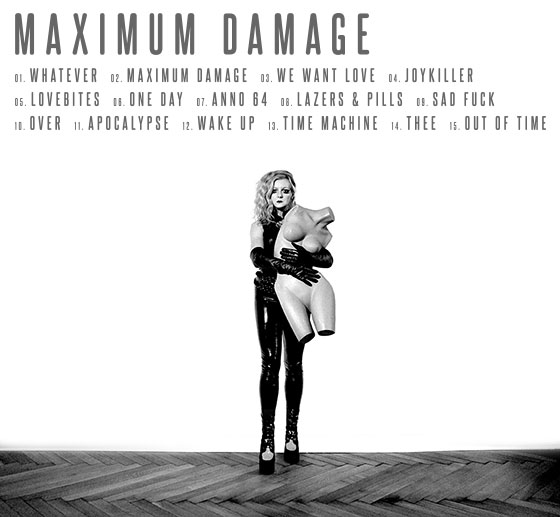 Introduced to this writer and in turn to this publication thanks to the short-lived, semi-legendary Sometimes A Great Notion festival here in Portland in the early two thousand teens, Das Fluff, the Berlin-based duo of Dawn Lintern (vocalist, songwriter) and Christian Ruland (synths, sounds, beats) have proven not just a durable proposition but quite the inspiring one as well. For background as to why, we direct you to our previous DF disquisitions (here, here, and here), but if we wanna talk ‘lights that never go out’ then it is toward their burning, inextinguishable torch that we must turn our can’t-look-away gazes as they alchemize the terrors tensions and molten anxieties of this worldwide dumpsterfire of a year in this crucible of a new album. Manic, crafted down to their scathing essence, its bursting surfeit of tracks – fifteen of them, as if they were too driven to bother looking for the ‘pause’ switch – unrelent (yes, this record demands we now recognize that as a verb), persuading via obsession and gall not just that the band apparently knows no mortal limits but that their modernized-Weimar last-dance electro-sleaze approach was prescient all along. Listening to Maximum Damage, pinned to your chair with something of a car crash fascination, it becomes clear that the language written inside that style has fully met its moment.

One-two punched from the get-go by the throbby ‘love in a time of apocalypse’ “Whatever” and the equally love-disturbed title track that puts the spell of well-purposed dysfunction into romantic play, Lintern’s lyrics riding with a fierce lack of regret atop a deep pulsing bed of beats that just might suggest the pounding surge of blood through one’s ears during 3½ minutes of exquisite panic, there is some question, even at this early stage, of ever wholly returning from this go-round inside the addictively dystopian world of Das Fluff.

Now, as would be gathered from clicking on any one of those links up there, such a claim-slash-warning has, to some degree or another, found itself attached to every one of their albums this millennium and indeed the whole range of classic Das Fluff hallmarks are present here on Max Dam in all their stinging, seductive, take-no-prisoners glory. The wrecked glam aspect, the sinister intimacy that borders on fetished craving when not crossing fearlessly into it (“Lovebites,” for holy fuck sake, opens with the darkly purred line “You’re young, pale skin…makes me shiver“), lyrics that often toy with menace like a cat batting about its prey, soundscapes that most frequently push into one’s consciousness and flood the synapses with a haunting acid charm, they’re all here in all their brash and forceful presence, it’s just the entire tableau keeps coalescing into ever more powerful form album after album. To the extent there’s something wild animal about their aesthetic, Dawn and Christian (and co-conspirator guitarist Joe Dochtermann) have never had tighter control of it as they do on Maximum Damage.

The primal, tightly-coiled “Joykiller,” chittering with a high BPM restlessness, seems to have decided to dispense with the idea of being abundant with hooks by instead just making itself into one long 3+ minute one. “Lazers and Pills,”, with a buzz of pitch-dark guitar Frippery hanging over a thudding cascade of a downtempo beat, teeters on an exquisitely tensed verge of release that never quite comes and is, naturellement, all the better for it. Similarly, both “Over,” a nightmare skating rink organ foremost among its tapestry of lingering effects, and its follow-up track “Apocalypse,” while denser and dancier than it predecessor, also privileges tension over release (check the latter’s “death wish” refrain where ‘death’ is declarative, ‘wish’ nearly whispered). Along with their flat out talent for melody and second-to-none production values – speaking plain sonics the record is a joy to listen to – it’s that punch-me-pull-you nature of your typical Das Fluff track, a kind of static electricity that permeates, that, quite literally, gives the band a bit of an edge over their contemporaries at this point.

Any great record is a balancing act consistently held and Maximum Damage manages that not only within the dynamics of its fifteen compositions but also as a whole.  Even in the harrowing passageways through which their songs most often wend, there is an understanding that not all dark lure is lurid. Thereby the delicate and stunningly vulnerable “Anno 64,” the damn near lissome “Wake Up” that’s among the most gorgeous songs we’ve heard this year, and the 154-ish “Out of Time” that closes the album out in a resigned bloom of lush minimalism, each of them placed just so in the manner of a band at the height of its creative command. What’s unusual, and delightful, and, yes, inspiring, is how Dawn and Christian have, with enviable focus and steely determination, gone from strength to strength even as they are, like all of us, not getting any younger. Put bluntly, Maximum Damage is Das Fluff’s best album yet and by some margin. We are, in a phrase, fucking amazed. [satisfy your craving here]