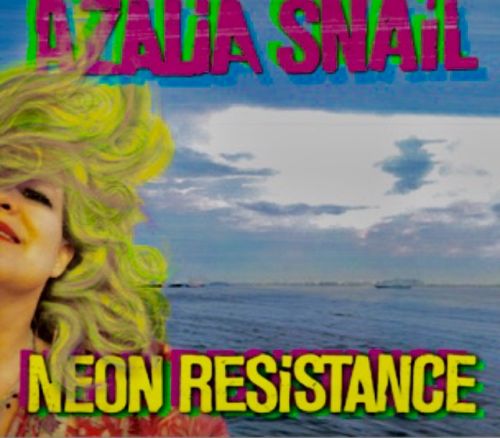 “Celeste (Can you Feel it?)” is the lead track off of the new Azalia Snail album, Neon Resistance, and it’s all at once catchy/trippy/dynamic. The song arrives today, while the LP will make its appearance on March 9th.

There’s no handy one- or two-word modifier to assign to the music of Azalia Snail. A singer, songwriter, and sculptor of sound and notes, she came out of New York in the early 1990s and cut a distinctive figure even by Gotham’s standard of independent-minded visionary rock.

Over the last 25 years, Snail has worked with seemingly contradictory elements. Her music is low-fidelity to the core and, at the same time, deeply ambient. She has perfected a kind of lo-fi total immersion, where each instrument has the tone of something borrowed or found, but in combination the arrangements give a ragged orchestral beauty to her surreal, catchy compositions.

“Celeste (Can you Feel it?) is a melting pop dessert that is an elemental example of Snail’s songcraft. The track is produced by LoveyDove partner Dan West, who also plays the singular lead guitar solo on it.

This video for “Celeste (Can you Feel it?), which gets its premiere here, was spontaneously shot in a downtown LA office hallway during the holiday season and in downtown Manhattan on a balmy summer evening. The footage was cut and assembled like a Dada collage piece, and edited with the latest iMovie software.

Find out more about Azalia Snail