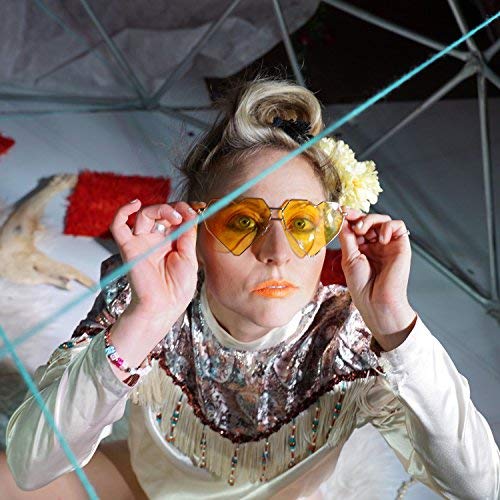 Similar to the curious irony that meets the notion of an ‘outsider artist’ – that irony being that to accomplish said work of singular vision requires that they be more intensely inside the process than just about any so-called ‘conventional’ artist – it’s also true, at least in the vast and continually expanding terrain encompassing pop music, that the ‘experimental artist,’ by virtue of their craft’s strict demands, is almost certainly more knowledgeable of all things pop-normative than, say, your average chart chaser (or whatever the equivalent is today; clicks chaser?). How else could she be sufficiently suited to channel the sprawling array of influences and styles pinging around the culture’s collective consciousness into her own churning command center so that she may creatively pervert them into what she believes are more compelling shapes? Put another (admittedly oblique) way, Harry Partch didn’t arrive at his now-legendary intonation-based perch by accident, but rather by learning compositional norms that he could later flaunt, re-interpret, and ultimately abandon. To the extent that experimentation by definition requires rejection to some degree of the standard forms, there’s also a kind of twisted reliance on them. Which brings us, via an appropriately contorted path of reasoning, to the artistry of Raquel Bell, and specifically the latest video to be released from her latest album SWANDALA (Bell, with Princess Donna Dolore and Megan McAtee, founded NO PROMISES PRODUCTIONS with the intention of A) creating video content for the entirety of Swandala, and B), according to the presser, “explor[ing] film and video under massively chaotic circumstances”).

Premiering here on Stereo Embers, “Vibration Carnation”‘s video could hardly be more representative of every precept mentioned or implied in the above paragraph. Hypnotic and disturbing – fitting for a track that suggests Let’s Eat Grandma caught in a floatingly dystopian dream state – it’s also intrigues with its dark hints of a playful innocence, its overall trajectory seeming to be stuck – tantalizingly stuck – in a visual feedback loop that’s half nightmare half fantasia. Whether the brief, somewhat capricious narrative arc depicts an act of post-mordem sadism with an Etsy touch or a spangled display of devoted, revenge-soaked fetishism or some other interpretation from your own fevered recesses is, if not exactly beside the point, perhaps missing it a tad. Something of a polymath, Raquel Bell applies her restive virtuosity to whatever discipline strikes a nerve. There’s the challenging rock-accessibility of SWANDALA (released July 27th on STORMB and on which appear sometime Roky Erickson bandmate Lisa Cameron, White Denim’s Jonathan Horne, and Adam Jones who’s spent time in Bill Callahan’s band), where tracks can veer from the yearn of Texas twang to fractured psych-blues to a sparse, parched acoustic ballad in the blink of three eyes; the audio meditations on her website that give new age music an existential kick; the ornate ink-and-watercolor works that fall somewhere between Paul Klee and a distaff Ralph Steadman, and of course the idiosyncratic, visionary video work (check “Lose,” check “Swan“), all of which, taken as a whole, seems intent on touching on the full spectrum of human experience. Hers is, in a word, a panoramic sensibility, and one feels while having a look-in at any one example of it that you’re seeing, simultaneously, both the all of her world and a single atom of it. Or anyway, that’s how it feels tonight. Hit me up tomorrow night for what may very well be a starkly different take. And if there’s anything more that we could ask of an artist, I can’t imagine what it is.