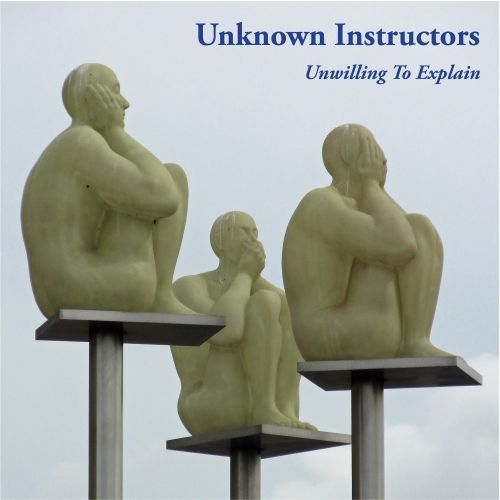 Unknown Instructors actually consists of several renowned and respected veteran musicians who have joined together to create something intriguingly different than their individual musical output.

Their latest album, Unwilling To Explain, just came out on CD and digital formats on February 22nd via ORG Music. The black vinyl and exclusive purple vinyl format will release on March 22nd.

Out of all the numbers on Unwilling To Explain, we pick “The Ballad of the Unknown Instructors” as Track Of The Day because it’s a prime example of the collaborative band’s sound and vision that combines the noise/punk/art rock, spoken word, and jazz genres.

“Ballad of the Unknown Instructors” is like a Beat Generation treasure dug up a half-century later, covered in the staccato grime, sharpness, and (sur)reality of skulking around city streets, dive bars, and cheap hotels – and the oddball, yet common characters that inhabit them. McGuire pops off the lyrics in a vivid monologue, taking on different voices, slipping on the mask of other identities as he delivers their dialogue. He’s joined by Joe Baiza, who also contributes vocals to the track.

The instrumentation is spare, but forceful, creating a sense of foreboding as it sneaks around and sporadically fires through McGuire’s descriptive jawing. Watt stretches his elastic bass line with low-end ease and Hurley hurls out jumpy drum thumps and cymbals strikes that keep the listener on his/her toes. Mascis keeps his guitar on a flickering simmer until he kicks out with the occasional blazing guitar salvo.

Bravo to the band members for this singular, striking song – and a whole album’s worth of them.