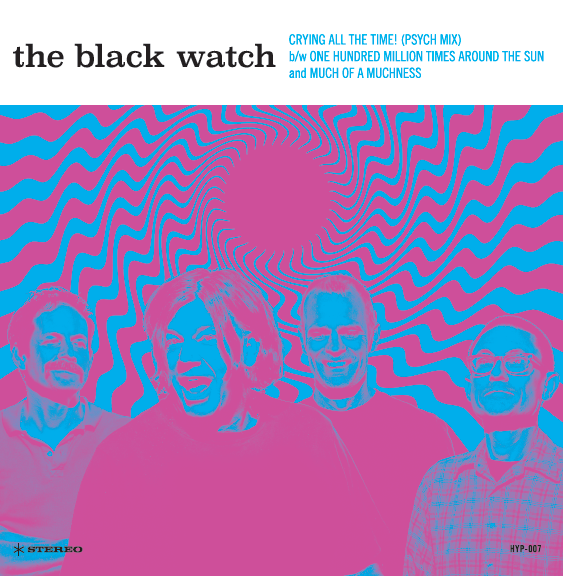 Although the black watch have an upcoming album called Brilliant Failures out in the near future, the Santa Barbara outfit have a new vinyl 7′” EP to tide over their fans.

Released by the Hypnotic Bridge label, the three-song offering is called The Crying All The Time EP.  Comprised of the title track plus “One Hundred Million Times Around The Sun” and “Much Of A Muchness,” this stopgap release finds the prolific band at the top of their game.

Of the EP, the band’s braintrust John Andrew Fredrick says: “In anticipation of the forthcoming Brilliant Failures LP on A Turntable Friend, we decided to bring out a bit of vinyl on LA psych label, Hypnotic Bridge, who are mad for all things 60’s, musically-speaking.  Stu Pope, who runs Hypnotic, asked us to add some purple granny-glasses and The Monkees-haircuts kinda sounds to some songs we’d done, plus record a b-side, so we rolled out the an old mellotron and imaginary sitar and away we went.”

A catchy blast of sonorous psychedelia and harmonic shoegaze, “Much Of A Muchness” is filled with the kind of chiming hooks and sneaky melodies that make it an instant pop classic.

Produced & engineered by Andy Creighton, the new 7″ EP is out October 11.

In other black watch news, Fredrick recently appeared on Stereo Embers: The Podcast.