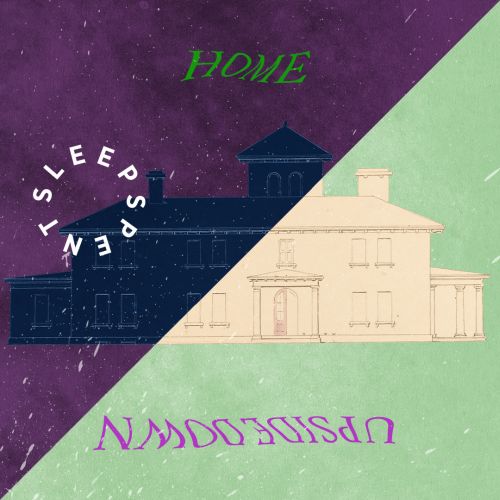 Austin North, the founder and frontman (songwriter, vocals, guitar) of El Paso, Texas-located indie rock band Sleepspent, has a lot on his mind and he brings his own experiences and issues to the table with his relateable lyrics.

Tackling topics like individuality, sexuality, and mental health, he and his bandmates Grant Gonzalez (bass) and Josh Mendoza (drums) create a rich and dynamic to reflective dream-rock atmosphere to drive home his perceptive points about the struggles of finding yourself and finding a place in this world.

North also brings his malleable, brooding to soaring vocals to the fore, at times moodily ruminative and at others airily keening with longing.

Sleepspent released their captivating and nuanced debut EP, It’s Better If You Don’t Speak Or Think, exactly a year ago (May 2018) and have dropped a string of singles since then (“California”, “What’s The Rush?”, and “Noise”).

Stereo Embers is thrilled to host the premiere of “Upside Down”, the latest one of two tracks (the other is “Home”) coming out simultaneously soon. “Upside Down” is an old song of North’s that he has re-recorded to powerful effect.

A supple, rhythmic bass line, bright guitar notes, and pronounced drum strikes give “Upside Down” a spare, New Wave vibe on the verses. North’s direct, narrative vocals fly into a higher, pining realm on the chorus sections that burst out with a whipped up sweep of guitar jangle, fast-tapped cymbals, pressing bass line, and lively drum beat.

North’s lyrics, which can be read below, speak for themselves, and North also kindly reveals intimate and interesting details about the backstory of how “Upside Down” came to be.

I am seeing upside down

There’s faces turning all around

Whether they are there is lost to me

Why can’t I see you

I don’t know if I’ve ever been here before

I feel a rumbling coming from the floor

And I don’t think I’m settled in

I just can’t seem to find my way in

I left my conscience at the door

And now my vision’s gone all blurred

And all my calls have gone unheard

I don’t know if I’ve ever been here before

I feel a rumbling coming from the floor

And I don’t think I’m settled in

I just can’t seem to find my way in

“While I was living in California, going to university at UC San Diego, I began to write songs largely about my declining mental health. The gratification and satisfaction that came with writing and finishing songs got me through the few years that I was there.”

““Upside Down” was one of those songs that genuinely got me through things, and was one of the first actual Sleepspent songs I wrote. I remember my original intention when recording the first demo of it, which was to give it a distraught and lonely, yet dancey and low-key clubby vibe — a juxtaposition that I felt really defined my experiences.”

“A simple drum machine and a wall of synths filled the soundscape initially, but as the band has grown and developed in the past year and a half, we realized that we could adapt that vibe into something more cohesive and emotionally powerful that fits Sleepspent’s style for this official studio version of the song. This newly energized version of the track still presents a danceable groove and tempo, as well as the fluttering synths and guitar drones that accent the chorus.”

“However, as I sat with the demo longer, I realized that I needed the urgency of the lyrics to shine through the vocal performance and the dynamics of the band, especially through adding live drums and highlighting new guitar parts.”

“The lyrics place the narrator in a social setting, like a club or a party, in an altered state-of-mind. The overstimulation and anxiety he feels overpower his senses and allow dangerous introspection and paranoia to take control — paranoia I was able to personally identify with about being unable to settle or fit in anywhere, exacerbated through how I overly-perceived others’ actions towards me as judgemental rather than supportive.”

“All of the music I write, I write with a cathartic intention. For me, there is power in vulnerability. This song is a strong example of that and I truly hope others can draw from for their own feelings of catharsis.”

Find out more about Sleepspent: