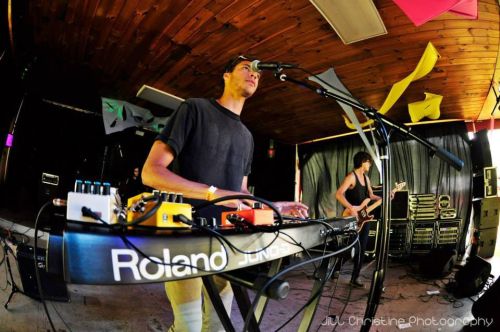 Noisebody was formed in 2010/11 by Noah Barker (vocals, synths) who is currently joined by Sean Liljequist on bass and Justin Heaverin on drums. The music project was initially influenced by Barker’s study of jazz at the University of Louisville. He released a 6-song debut EP titled You Are Here under the moniker Noise New York.

True to that name, Barker relocated to Brooklyn in 2012 and reformed the band, recording as Noisebody and self-releasing a full-length album, Upstream Dreams. The singles “Condition” and “Sky Riders” follow up the album.

Barker goes into the backstory of “Sky Riders”, revealing, ““Sky Riders” is actually one of our oldest songs, written at the same time as our very first single “Ace”. The original release of this is on Upstream Dreams and is a bit more mathy, but this recording of it is more similar to the original demo I recorded of it in 2011 and is more related to the vibe of the track. The song is soft and is about cruising around with your friends, driving out of NYC, getting lost in a field with someone you like spending time with, that quiet moment in the beginning of summer.”

Find out more about Noisebody