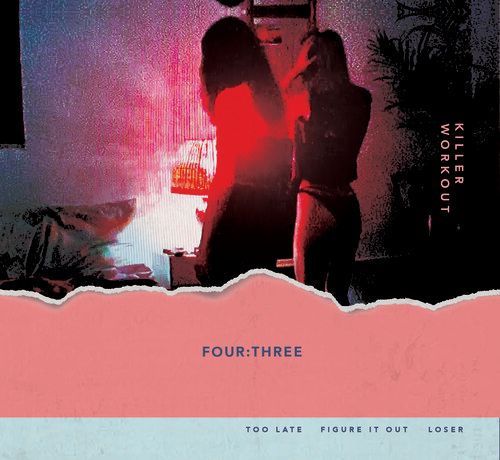 Seattle-based pop-influenced disco-punk band Killer Workout craft high-energy and highly entertaining music and videos that are sure to please fans of the New Wave ‘80s, as well as devotees of the disco-dancefloor and gritty rock-club ‘70s.

Killer Workout’s moniker was inspired by a wild ‘80s slasher movie by the same name. The band are set to release a new EP on June 26th titled Four : Three.

For those who didn’t grow up in the ‘80s, 4:3 is the aspect ratio of TVs at the time, which produced a box image on screen of whatever was being viewed, including those antique VHS tapes.

While Killer Workout are a blast from the past in many ways, they also keeps things fresh with a vivid and pumped-up sound and cheeky attitude.

Stereo Embers is pleased to host the premiere of the dynamic and quirky, The B-52’s/The Cramps-like amalgam “Loser.”

Darnell comments on the song, stating, “When I was a kid, people thought the stuff that I was into was lame. They called me a “geek.” But flash-forward 20 years later and being a “geek” is cool. People self-describe as “geeks” now. So, I wanted to make a song that flipped the script on the word “loser” as well. It’s meant to be this defiant thing of, “Oh, you think I’m a loser? Well, you’re a loser too, jerk.”

Find out more about Killer Workout