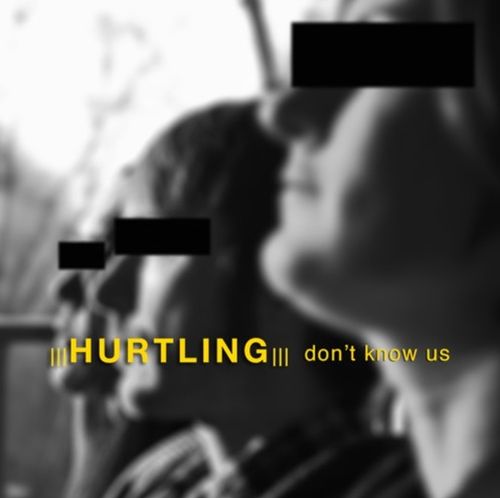 U.K.-based alt-rock/post-punk trio Hurtling is set to release their debut album, Future From Here, on October 18th via Onomatopoeia. Stereo Embers Magazine is thrilled to host the premiere of “Don’t Know Us”, an exciting, socio-politically relevant track from the LP.

Band members Jen Macro (vocals, guitar), Simon Kobayashi (bass), and Jon Clayton (drums) self-produced Future From Here and recorded it at One Cat Studios in Brixton. Described as an “exploration of loss and hope”, many of the tracks deal with love and heartbreak in its various forms.

“Don’t Know Us”, however, is a blazing, anthemic number that deals more with socio-political turmoil than personal relationships – although the personal *is* political, especially these days when some issues are literally a matter of life and death.

Gritty guitar crunch is weighted by low-end bass, while strict drum strikes propel the song forward as Macro exclaims with defiant passion, “You want to dumb us down / You don’t know us… / and you never will.”

“When I started writing “Don’t Know Us”, I was going for a Thin Lizzy-meets-The Kills vibe, just to have some fun. Then the Brexit voting nonsense happened, so it kind of became an angry reaction to politicians being shifty, and disowning people – no matter which way they voted. In the song I have a sort of a fantasy that the people in power can’t be ready for what they don’t know, the enemies they can’t keep close, and that they will, one day, be toppled.”

On an interesting music-related side note, Macro has been a member of My Bloody Valentine’s live band! MBV and other illustrious acts including The Breeders and Sonic Youth inform Hurtling’s compelling sound.

Oct 24 – The Half Moon, Bishop’s Stortford

Find out more about Hurtling