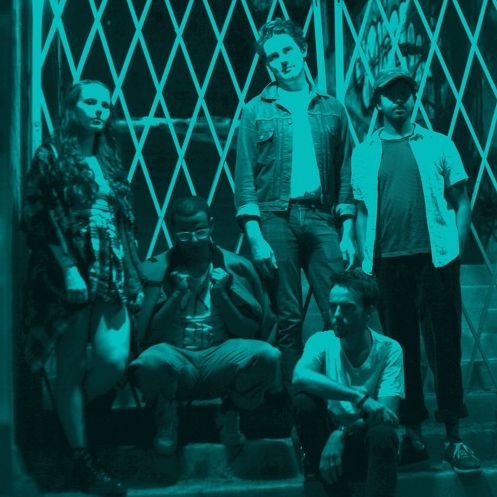 Washington, DC-based post-punk/rock hybrid band Bottled Up formed in 2016 with the arrival of songwriter Nikhil Rao (Seasick, Shari-La-Las, Kid Quazar) to the DC region.
Rao relocated from Oakland, California, where he had been in the DIY music scene, with the intention of bringing the restless and kinetic Bay Area sound to the East Coast.
Rao is joined by drummer (and his brother) Rohit Rao (Violent Change, Androgenous Elk), who replaces original drummer Alex Dahms, multi-instrumentalist Colin Kelly (ex-Young Rapid), and guitarists Michael Mastrangelo (Fiction Like Non-Fiction) and Elizabeth Cannon (Elizabeth II).
Bottled Up released a self-titled EP in 2017 and followed that up last August with the album BU2. Now the band has a bunch of singles to unleash into the world, including their spiky to flowing new tune “Every Night.”
Stereo Embers is excited to host the premiere of “Every Night.”
The song moves with shadowy, but purposeful intent, stepping with a heavy bass line and steady drum beat at its start. The angular guitar lines are sharp to reverberating, winding around a smattering of piano notes and Nikhil’s strong and direct vocal tone.
Mid-way though “Every Night,” the instrumentation segues into prog-rock territory, loosening its edgy grip and swinging out with emotive sing-talking vocals and a ramped up pace of clattering of drum sticks on cymbals and cycling to pattering guitar lines.
Nikhil reveals some details about the track, explaining, ““Every Night” is a psychedelic exploration… The song begins with admissions of guilt and ends with Mega-Man inspired riffs of redemption. The lyrics go back to my memories of going to the Hindu temple to pray to deities for success in an uncertain future.”
“It’s called “Every Night” because diving into this concept kept me awake as it brought up fears of mortality, purpose, and if I was ever “doing the right thing…”
Find out more about Bottled Up
https://www.facebook.com/bottledupdc/