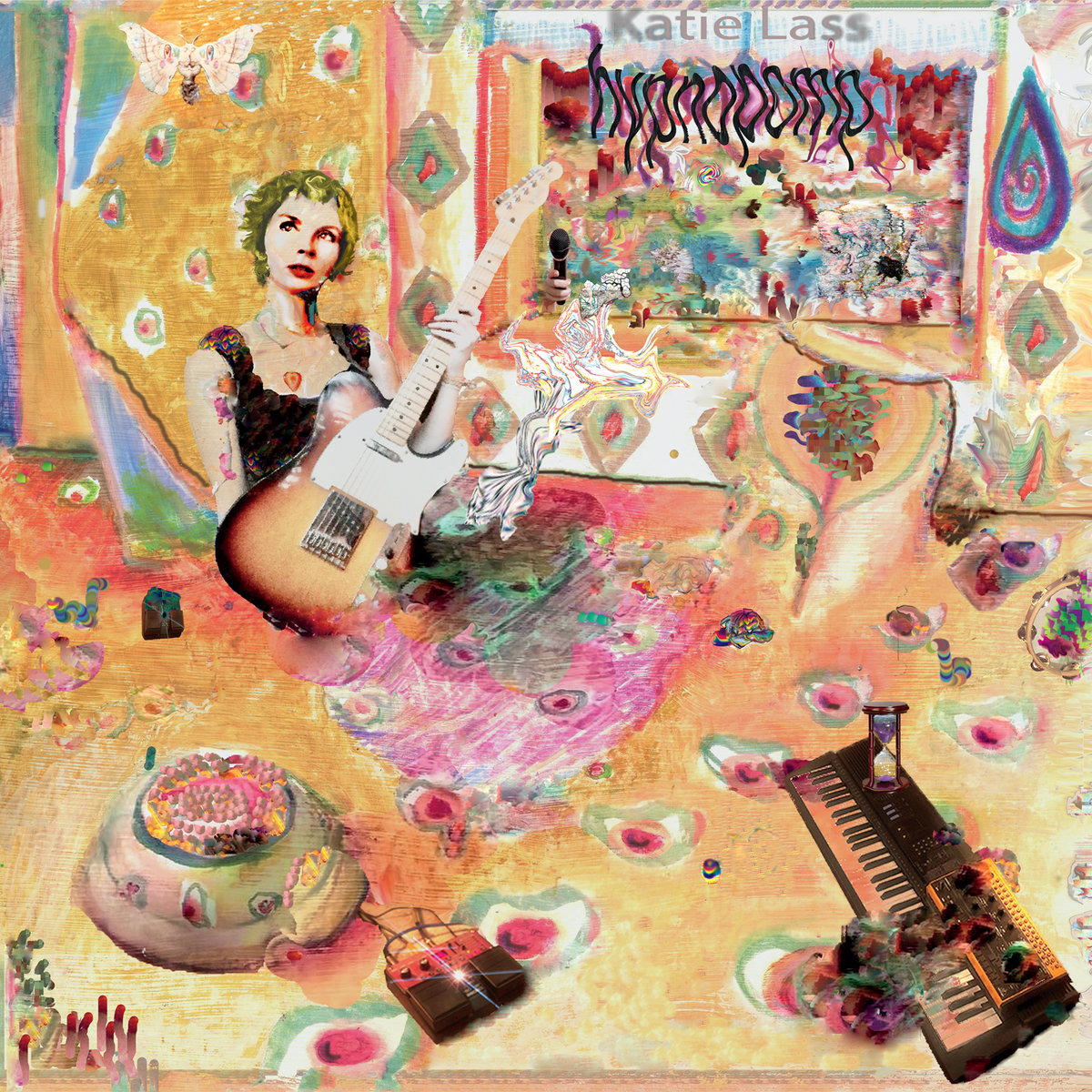 We could begin this way: “Every once in a while, an artist comes along that blasts holes in pretty much every understanding we have of so-called ‘pop’ music.” Or we could choose this as our opening: “Imagine if the creative energy of Can in the Damo years was condensed and reconfigured into a single, heretofore unknown young solo home-recording artist.” Or, maybe this: “What would you get if you took a primal, raw-but-somehow-fully-formed aesthetic bursting at its natal seams and crossed it with a fearless freshness raised in the US rust belt that, weirdly, feels like a mashup of Broadcast and Gong ?” Any one of those and countless others – we could do this all night – land you in the sui generis parameters of Detroit-based Katie Lass. Driven, blessed with a store of self-made, up-her-sleeve tricks that would make Daniel Johnston blush and Kramer go crazy, this is the type of rarefied territory that connects the until-now unconnected dots between The Shaggs and Miranda July, ie a quality that one might refer to as an ‘elevated primitivism.’ Whatever label anyone might attach to them – and the fact that everyone that hears this work will come up with their own descriptor is itself a testament to Lass’s boundary-shattering ways – there can at least be little wonder that the seldom-impressed Warren DeFever fell immediately for the wonderfully unsettled palette that Katie Lass stirs up inside one’s ears. While we can’t be entirely sure, we’re nonetheless fairly damned certain that very few debuts – be they released the remainder of this year, all of next year and/or beyond – will display such a mix of daring self-belief and out-and-out temerity as Hypnopomp manages to bring with what seems an almost effortless nonchalance. We…are stunned. [get Hypnopomped in digital or vinyl form here]

This is the only cover on the album. Instrumentally it doesn’t mimic much of the original (a hidden track from the white album) but I liked the subtle variations in the vocals that carry the song along and had to do my own version. Obviously the lyrics are wistful and nostalgic but to me it’s also about where consciousness comes from and where it ends up. Hanging always on that mystery. As someone who’s lived a long way from home for a while now and maybe never having felt a deep sense of belonging in any particular place there’s a component of that perpetual restless feeling in there too. Warren placed this track first when he chose the song order during mastering, not sure if he knew it was a cover but it’s kinda perfect this way.

Synthwave witchery. I wanted to make a song I could dance to that had a magical menacing feeling. This one came together in a few hours. Short and sweet and sinister. It’s the last track I recorded for this album, which would’ve been sometime around October 2021.

This title was a joke my friend TJ made which I adopted for this song. The lyrics are mostly improvised and spontaneous so it seemed appropriate to use an adjunct title. I always like hearing about artists who opt for sounds over words as vocals, like Elizabeth Fraser or Kikagaku Moyo. Often some meaning will kind of just drape around the sounds and you’ll hear different words and phrases reflected back at you later. Usually I’ll write actual lyrics though, or swap different words in to replace what initially emerged, it just depends and it’s always changing. This song was kind of a cathartic release after a hard time I had letting go of an unhealthy relationship and the confusion surrounding all that.. isolation, alchemy, darkness, fire and light. The drums were actually recorded for an entirely different song but I dropped the stem into this track and it worked really well. Also the crossfade that Warren did into the next track sets off the two tracks in a completely unexpected way.

This track started as a collaboration. I played drums and Kendall played bass. Then we sampled and looped that and I played some glockenspiel over it. Later I ended up overdubbing the guitar and vocals, and some additional bass parts. At the end I sampled this metal music box I have which just seemed like a nice way to close the song. I wanted this one to have a heavier sound but with some delicate elements mixed in. The lyrics are about the desire for transparency in connections with other people and how the void can subvert your instincts about certain relationships. Sometimes it can feel impossible to grow as a person while someone is keeping their illusions about you and about themselves alive and you have to break away from those things in order to continue becoming who you really are. For some shimmering reason this song sounds especially good on a snowy day.

5. Shadow on the Shoreline

Began as a syncopated keyboard progression. The live version I’ve recently been playing with Kevin McKay on dual guitars has been deemed doom s!udge. Parallels have been drawn to PJ Harvey, Black Sabbath and Cocteau Twins, all of which I do love. The album version is more amorphous I guess, with the reverse percussion mixed in, and a lot of untethered guitar overdubs. Lyrically it’s to do with duality and the shadow self. We’re recording some new songs right now that I’m really excited about and will probably record the updated version of this one too.

Was listening to alot of Takako Minekawa and the Boredoms at the time this was recorded. Ambient pop freakbeat synthesis with synth, guitars, drums and bass. The guitar loop was the foundation for this one. I recorded separate tracks of drum breaks and phrases and mixed them all together. In general with songwriting I don’t like things to be too polished and regimented, but if the idea lends itself to a traditional structure that’s great too. Now that I’m playing live more it helps to write in a simpler format for sure. I just prefer to do things my own way and let it all evolve organically. I’m very visually oriented, structurally shaping songs like carving frequencies, connecting imagery and movement with different sounds. Often I remember chord patterns based on the movement of my fingers and hands. Music has a big influence on my paintings too. It’s all really interconnected for me and I’m always working on multiple things, in concentrated bursts.

I came up with the keyboard part for this when I was making a lot of loops, threw a beat over it and sent it to my friend Cam Frank. We decided to try and record it as a full song. Cam came over and laid down the drum track, then I laid down the keys and came up with a bass line. We recorded some vocals that day too but didn’t end up keeping them. I overdubbed some slightly different, slightly more insane vocals later and added guitar and synth bits. I bounced the track to Cam who then added backing vocals and mixed his own drums. Cam helped me out with a lot of advice when I was mixing this album. I’m not really sure what this song sounds like to other people, but to me it’s a psych-saturated joint in the tradition of all the millions of catchy songs about the sun that I love, like Lazy Old Sun by the Kinks, Morning Sunshine by The Idle Race, Everybody Loves the Sunshine by Roy Ayers, Cherry Sunshine by Somesurprises, so many good songs about the Sun.

Skewed a guitar sample with some delay/bending effects and looped that to start this one off. Then added a complementary guitar part and tempo delayed drum machine. A lot of noise on this track. I like how the noise adds to the texture of the distorted guitar and gives a submerged feeling to this song. Kinda mindless and raw, simple lyrics, didn’t think too hard about this one, but it’s one of my favorites.

The production on this track is deliberately playful, live drums were sampled, water sounds were sampled, some other stuff was sampled. The bass really bounces hard into the corners. I love the guitar tones on this one, though I can’t honestly remember what the chords were. It’s a simple tune about getting bogged down by your past but emerging from that and feeling reborn. “Doesn’t really matter who you were before. It’s alright, leave your mind in the ocean.” Fun fact: the sample at the very end says “you’re a rotten sea monster.”

This one emerged as a combination of a couple guitar loops, which I then did a live take overtop of with vocals and lead guitar and then added in an electronic bass/percussion track. A woozy berceuse about overcoming fear and loneliness.

I wanted to make a song like Spectrum’s “How You Satisfy Me.” I love the way that song builds momentum and drops back out and builds back up again. I realize this song sounds nothing like that Spectrum song but I feel like thinking about trying to shape it that way took me on a path I might not have otherwise found. So basically it’s a sideways experiment.

The initial idea for this one was the bass line. Ran my keyboard through plenty of effects. I didn’t want the drums to detract from the ethereal feeling of this one and it took me a while to find a solution. My friend Cam Frank recorded a track with goats toes (a percussion instrument which was borrowed along with the drum kit I used on the album from this guy Chris I work with, thanks Chris) and then we both just kinda clanged around on the cymbals to add some movement, and then mixed all that into the atmosphere of the song. “Thought I was through looking long out from my window,” is a nice ambiguous phrasing I think, proud of that bit. Pretty sure the first demo of this was the first idea recorded for this album, which would’ve been near the end of 2020.

An eidolon is a spirit or a phantom, imagined orbiting overhead. The chord progression for this track is really satisfying to play, feels like a lullaby. The bass line just emerged in response to the guitar line and then the backing vocals kind of fit right in between those melodies. Finished with some synth, tambourine, and cymbals. A nice dreamy song to simulate hovering in space.

14. Sugar Chasm
I layered some live drums until I got this galloping propulsive beat to accompany the guitar progression and then did a live take with bass and vocals over that. Added a guitar solo and some vocal embellishments over that. Then I did some percussive shifting and delay on the whole track to give it a fluid effect in some spots. This is another one that came together really organically and didn’t require much overdubbing. Wasn’t really thinking about any of the influences at the time, but I can see how maybe Primal Scream and My Bloody Valentine might have informed this one, among other things. To me it’s the most rock-leaning song on this album. Originally I was calling it “breach or chasm” but when I listened back it sounded like I was saying “sugar fit,” which I wasn’t, but it suited the manic energy of the song so I combined the titles. “How do you fit, How do you pick onehow? I can’t resist. My bones-god skin to kiss. Nervous itch. My bones-god skin to kiss.” The lyrics are pretty flexible in meaning, but rooted in the fact that I find it difficult to settle down and stick with one thing, always kinda wanna keep moving on you know, keep changing.