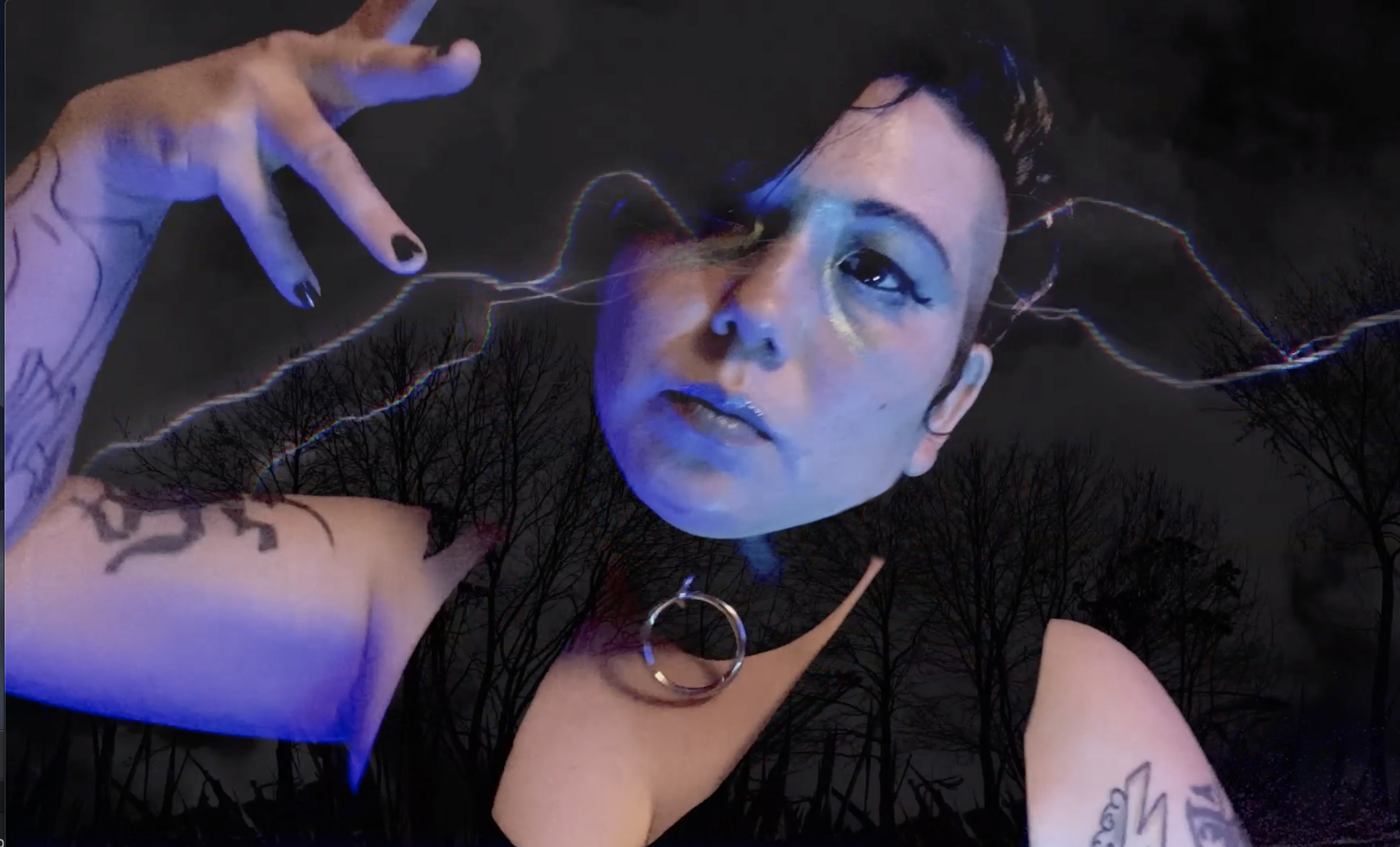 In a musical community based in trust, empathy, and fearless explorations of the darker parts of the human psyche, Akiko Sampson of Oakland post-punk band Ötzi and co-founder of the Psychic Eye label stands out. Fiercely honest not just in word and deed but also as an artist, you can be certain that wherever they train their creative focus will be well worth checking out, an assurance backed up with some force by this debut video from their solo project Yama Uba. Tailored specifically for a Halloween release, the imagery that flashes across the screen as “Phantom World” plays out, backdropping Sampson as they dance and exhort toward the camera like the very spirit of a yama uba – a ‘mountain witch’ in Japanese folklore – is a rich unsettling evocation of the song’s central tension. Ominous clouds scudding behind black skeletal trees, an abandoned room, a scarred church later set to flame, jagged white lines crackling cross-wise like synaptic lightning strikes, it all flows into and out of one’s vision like hallucinations designed precisely for the final night in October. However, while without question an effective, diabolical visual feast, it’s the bewitching, twitching, beat-addictive quality of the song itself that will stay with you as you venture out be it on All Hallowed Eve or really any evening past dusk (they’re all pretty much Halloween night in our world anyway, right?).

Built upon a sparse, echoic rhythmic structure and the presence of a pitch dark synth, it’s nonetheless a driving track, pulsing with a constantly unfolding thrum that draws you ever closer to the edge of your seat. It’s also, no surprise for those familiar at all with Ötzi, goth-catchy to an almost obsessive degree. Yet the song’s power at its essence is in the lyrics. As put by the singer themselves, who deals almost daily with fibromyalgia,  “”Phantom World” is about chronic pain and disability, and the treatment of disabled people in society,” adding “I often spend hours in bed just waiting for the pain to subside. In those hours, I get taken away from life into a world of unexplained phantom pains.” Hence the title, hence the bruising honesty.

Allowing themselves the fullest deepest dive into vulnerability, acknowledging, without the least note of self-pity, the pain that haunts them from within their own body – “these bones’ll weigh me down / they are my world” – Sampson thereby is able to rise above it or at the very least neutralize its psychic sting, at one point even addressing it in a mocking angry tone of acceptance (“oh yeah, my best friend / how do you do, I’ll see you again“), all from within a swirl of constant movement that mesmerizes even as it challenges, pulling you in until you have no choice but to listen harder, at which point you’ll likely find yourself responding in kind, swanning in your chair, inside the dark eerily-lit club in your mind, lost in that fluid trance we all know so so well. Happy Halloween, darklings, enjoy this, and keep the dark faith ♥

[Yama Uba’s debut album, which includes “Phantom World”, will be released in late spring of 2021 on Psychic Eye and Ratskin Records]