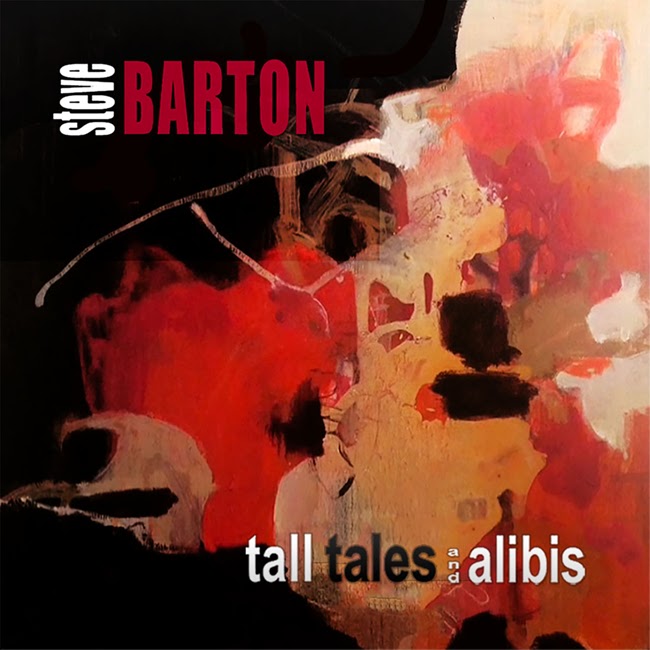 If your only reference point for the work of Steve Barton is his band Translator’s 1982 standard “Everywhere That I’m Not,” well, you’re not alone. You’re also not alone in having missed a songwriting career full of talent and twists and tales of mischief, regret, joy and hell and ecstasy and sorrow. What we end up realizing when confronted retrospectively with an artist such as Barton is that here this guy that’s been living in our collective midst for decades and yet we’ve allowed ourselves to be too busy to recognize the incisive, truth-telling town cryer that’s been crying out some version of our own truth all this time. In a sense it’s like finding out that that rather odd uncle at family gatherings that still dresses in bespoke leather and Blasters-styled vintage shirts actually has a backstory that not only merits a closer look but ends up blotting out all the rest of the family’s stories combined. Hence we arrive at Barton’s latest release, Tall Tales and Alibis, a stunningly coherent 3-disc set that lays out an artist’s worldview that’s not only reflective of his vast past experience as an essential player in the by-now-accepted genre of indie Americana (in his case with a touch of San Franciscan post-punk nous) but as well his recent move to Portland OR – check out the rain-soaked acoustica of opener “How Can I Believe” – a decision that this writer, a Portland-located San Francisco emigre since 1989, can’t help but applaud.

I only allude to the first two tracks on this lengthy, consummate work but I can assure you that the whole of Tall Tales and Alibis not only provides an intuitively brisk narrative of ‘being alive in the US in the 21st century’ but as well a (mostly) acoustically rocking compendium of every era Barton has survived and the eras that influenced them. Throughout, you’ll hear yearning you’ll hear love, you’ll hear disaster and hope, the entire tableaux of human experience as lived over the last 40 years written in a kind of emotional modern sanskrit, a singer-songwriter language that will eventually, perhaps, pass into dead language obscurity but in efforts of artistic expression such as this there’s always some chance that future scholars and dreamers will derive from what they discover a glimpse of redemption, of the rewards that come from a hard-fought humility. The songs on the sprawling Tall Tales and Alibis may have an everyman’s ring to them but that’s just it. Possessing the common touch is a quality that’s becoming increasingly rare, like showing pure agate in a gravel of fool’s gold (ref. “Little Rule Breaker,” what the hell).

A long listen that goes by at the speed of life, Tall Tales and Alibis, released on Sleepless Records on March 2nd, is above all else a diary of witty, plainspoken honesty. Think Thoreau in the voice of Jonathan Richman accented with a Dylanesque popsike Paisley Underground sensibility. That’s a lot of referents, but in truth, I fear I’ve left a few crucial ones out. This is that good, that encompassing.