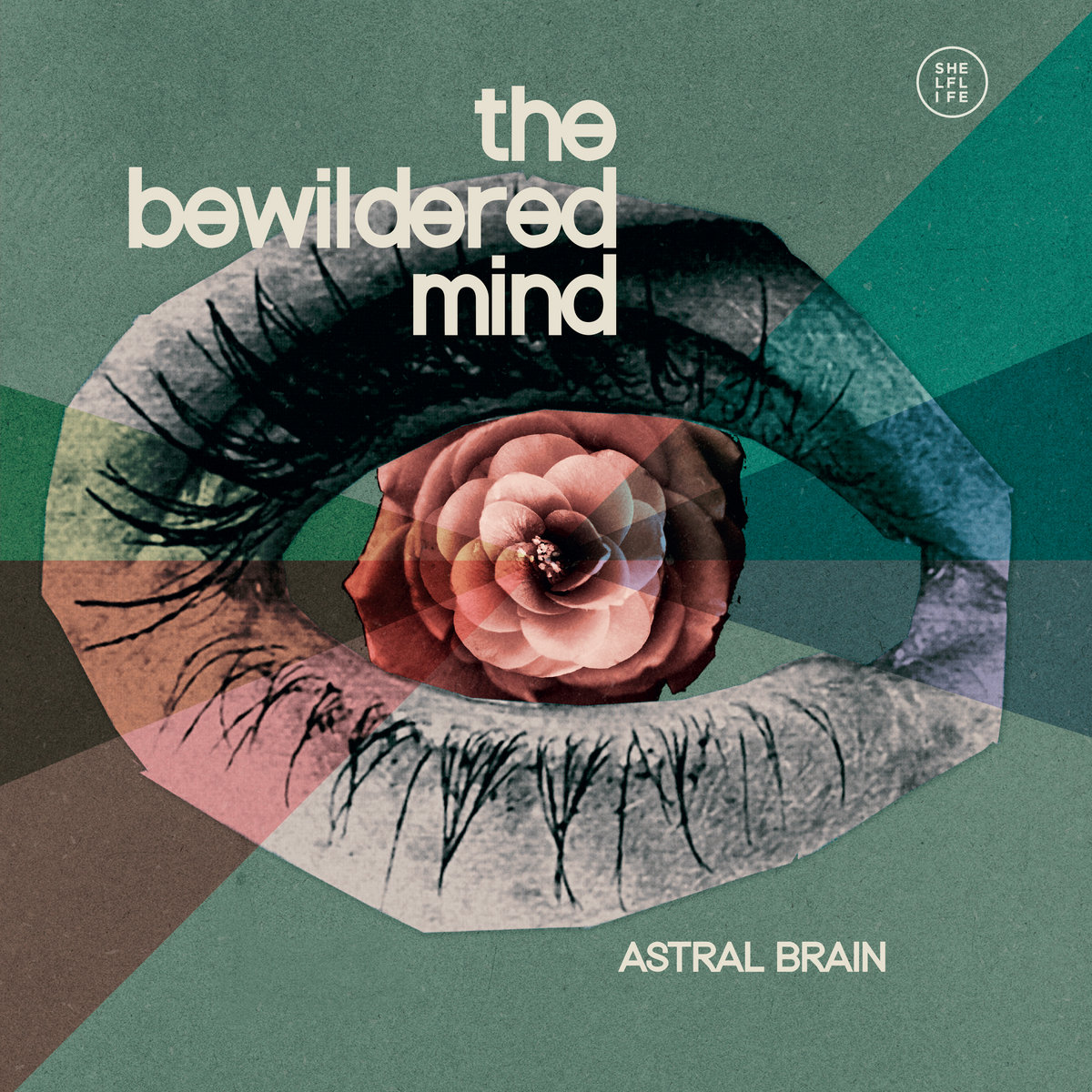 As music writers we often say things like “If Stereolab went on holiday with ABBA and they all fell in a well together, when they were hoisted to freedom they’d sound like Astral Brain.” Or “Imagine Broadcast never had their run tragically cut short but instead were able to keep reinventing themselves, releasing a new ‘debut’ album Groundhog Day-like every couple years. One of them would sound like The Bewildered Mind.” As you no doubt know we don’t say these things to be cute – well, OK, maybe a little – but to provide salient compass points that’ll help you chart what we’re trying to describe to you on the map of sound you have pinned to the walls inside your mind. You likely also realize that I didn’t just pull those above examples out of some randomized comparison generator but rather because, when it comes to this album from Astral Brain, they’re not too far off.

Released today (Oct. 15th) on the uncannily reliable Shelflife label, this debut album from composer/producer extraordinaire Einar Ekström and melodist, lyricist and exceptionally lyrical singer Siri af Buren, dba Astral Brain, shimmers with intelligent pop smarts, as one would expect from this pair and from a project that came together with a fleeting touch of serendipity. When Ekström’s previous band Le Futur Pompiste fell apart not too long after 2010’s self-titled full-length he began writing fresh new music in hopes that providence would eventually provide a new foil and a few years down the road it did just that when he was introduced to Siri from the Malmö-based band Testbild! who, as it happened, Einar had been avidly listening to for years. The rest, as they (don’t actually) say, is ecstasy.

Sounding at times like hippie jazzateers, at others like runaway Laura Nyro acolytes, unafraid to mix up the mix with cinematic touches and/or ambient sound captures while veering in and out of lovely 70s English folk passageways (“Midsummer’s Lullaby”), grooving in a mellow motorik mood (“Treasures”), or bringing the bucolic to the psychedelic or the other way around what’s it matter (“The Field Trip”), this album is all over the place in the most delightfully focused way, it’s escapism with a wickedly soft eccentric bent, one that lulls, lures, and illuminates in ways not a lot unlike those referents first mooted up top, though we hasten to add that this isn’t a case of ‘spot the influences.’ Quite the opposite, in fact, as, also like the above-mentioned, Astral Brain is a band apart, floating on their own and marvelously so. So hey, if you’ve got a spare 37+ minutes, do yourself this favor, click that SoundCloud link. At the risk of sounding even further music writerly, this is one of those gates of discovery you’re not exactly led to every day and I’ll go so far as to say this: it’s the equivalent of that scintillating, vibrant summer vacation you never got a chance to take this year. [As a bonus, Einar and Siri were kind enough to provide their thoughts about each track. It’s there below the SoundCloud link]

The chorus of this song was written many years ago but at the time I didn’t know what to do with it. It wasn’t until later, inspired by the purchase of an antique German zither that the actual verse of this song came together. The tonality of the instrument is really special, and you are stuck with a set of fixed chords, so you are sort of steered into a certain harmonic universe. This gave birth to the introductory verse of the song, and it wasn’t long after that I got the idea to pair it with the chorus I had written earlier. This was one of the first songs Siri worked on, telling a story about lost love, missed opportunities and wishful dreams of parallel realities.

This one was finished last December, just in time for the final mixing stage of the album. It was the missing piece that finally took shape after a brief period of writer’s block. We had had discussions with Siri on many occasions about writing a song dealing with the experiences of becoming a parent since it was something we both had experienced recently and were deeply affected by on many levels. We wanted to write a song that dealt with both sides of the emotional rollercoaster that becoming a parent can be, rather than just focusing on the euphoric aspects of it. At the time of writing, we hadn’t decided who would sing it. I laid down the first lead vocals to the track and was quite happy with it, but in the end we decided to try with Siri’s voice, and it just worked better so that’s the version that made it onto the album.

The earliest demos of ’A Dream’ dates as far back as May 2008. It was written for another band I had at the time, but it came to an end shortly thereafter, so the song was shelved. I rediscovered it while we started working on this album and thought it would fit in quite well, so I decided to rerecord it and polish it up to the same standard as the rest. I remember, thinking back to the time of creation, this was one of those songs that basically wrote itself in a matter of minutes. It tells a story about some unlikely events leading up to some unlikely engagements, and about becoming infatuated by someone while also realizing the whole thing is doomed from the start. It’s about being left with nothing else but a memory of a dream-like day that you once had.

The working title of this one was ‘Basil’, and it pretty much sums up where the inspiration to the music came from. It’s my take on a Basil Kirchin style song, as would be found on the “Abstractions Of The Industrial North” album. I remember when hearing the album for the first time, I thought it sounded like some hypothetic musical utopia that I could have only dreamed of, except, it was real. So, no wonder there had to be a song on our album that attempted to channel the spirit of the intense drums, the monotonous pumping bass and the repetitive groove that to my mind is the essence of Kirchin’s masterpiece. In terms of instrumentation, this is one of my favorites of the album as the Galanti Vibraphonette and the flute, played by Lisa Isaksson, really stand out. This is a tale about a journey towards unlocking life’s hidden treasures.

This is another one that can be traced back to a specific spark of inspiration: The Beach Boys ‘California Girls’. I’ve always loved that song with the steady shuffle beat, the simple bass line and the chord progression. With Siri’s vocals, it becomes something completely different, but none the less, the underlying beat has to pay its dues to that 60’s classic. Lyrically this is dealing with the ambivalence of parting ways with something toxic while at the same time being afraid of what lies ahead.

I think I was in some kind of an early Pink Floyd mode when writing ‘In The Mayweed Fields’. I wanted to write something capturing a more ethereal, or otherworldly vibe. The lyrics to the mellow chorus is partly lifted from some old scrapped demo from ages ago. I picked out the part with visions in a dream and built the rest around that. This is basically about being tired and worn out but finding comfort in a dream world of summery meadows and a mysterious girl in a long gown. As with ‘Behind Our House’, we weren’t sure who would sing this one. I made a version with my vocals at first, but in the end, we thought Siri’s voice was better suited for the lead so only some of my backing vocals were left in. This song takes the price for being the most difficult to mix, with its many layers and varying timbres. I was working on it right up to the day it was sent in for mastering.

I wanted to include an instrumental that would act as a breathing space on the album in order to slow down and give the opportunity to rest the senses for a while. This one is written with that specifically in mind. It starts out with some field recordings I’ve done in a forest with birds singing and some recordings on a beach with random chatter from people having a good time. I’ve pulled elements from my mental inventory of 60’s & 70’s movie soundtracks to create a sonic landscape that harmonizes with the mood of the field recordings with the intent creating a lullaby for daytime naps on magical summer days.

The origin of this one is quite funny… It was originally written for a competition initiated by a certain brand of painkillers, just for fun. It was a national competition that anyone could participate in with the goal of finding the new theme song for their revamped image and related commercials. Needless to say, it didn’t win and the song retired to my archives. I did always like the 60’s psychedelic & folky vibe of it though and decided to showcase it to Siri. Luckily, she liked it and what she did with it completely transformed it into something else and it became a meaningful and serious song, despite of its lighthearted inception.  The lyrics are written from a child’s perspective, contemplating the downfall of being let down by the ones you trust.

‘From Above’ is the second song featuring a shuffle beat on the album, together with ‘Goodbye’. It’s inspired by Virna Lindt’s ‘I Beat The System’ from 1983, trying to encapsulate the combination of raw energy and refinement it displays. The Moog bass is a nod to one of my all-time favorites; the Yellow Magic Orchestra. This is also one of the early songs that Siri worked on. In fact, it was the first anyone heard of us as it was our first single back in 2019. The one you hear on the album is a remastered, and slightly reworked version. This song is about finding the right mindset in order to get back on your feet after being struck down, as metaphorically illustrated by the protagonist who grows wings and flies into outer space.

When starting out writing the lyrics for ‘Windmills’ I was thinking of a topic dealing with being exhausted and wanting a place and time for rest. As it was progressing there was another meaning that started emerging. I realized it was also expressing my thoughts surrounding a dear friend who had passed away some years earlier. In the end, this became the essence of the song and what it actually was channeling. It became a story about wanting to give a peaceful resting place for a tormented soul and about planting a seed that would let the memory of the departed mind live on. When writing the music, I had a Canterbury-esque sound in my head, something folky like Kevin Ayers, whom I had been listening to a lot. In the end I think the mellow sound of the music worked well with the melancholic nature of the lyrics.