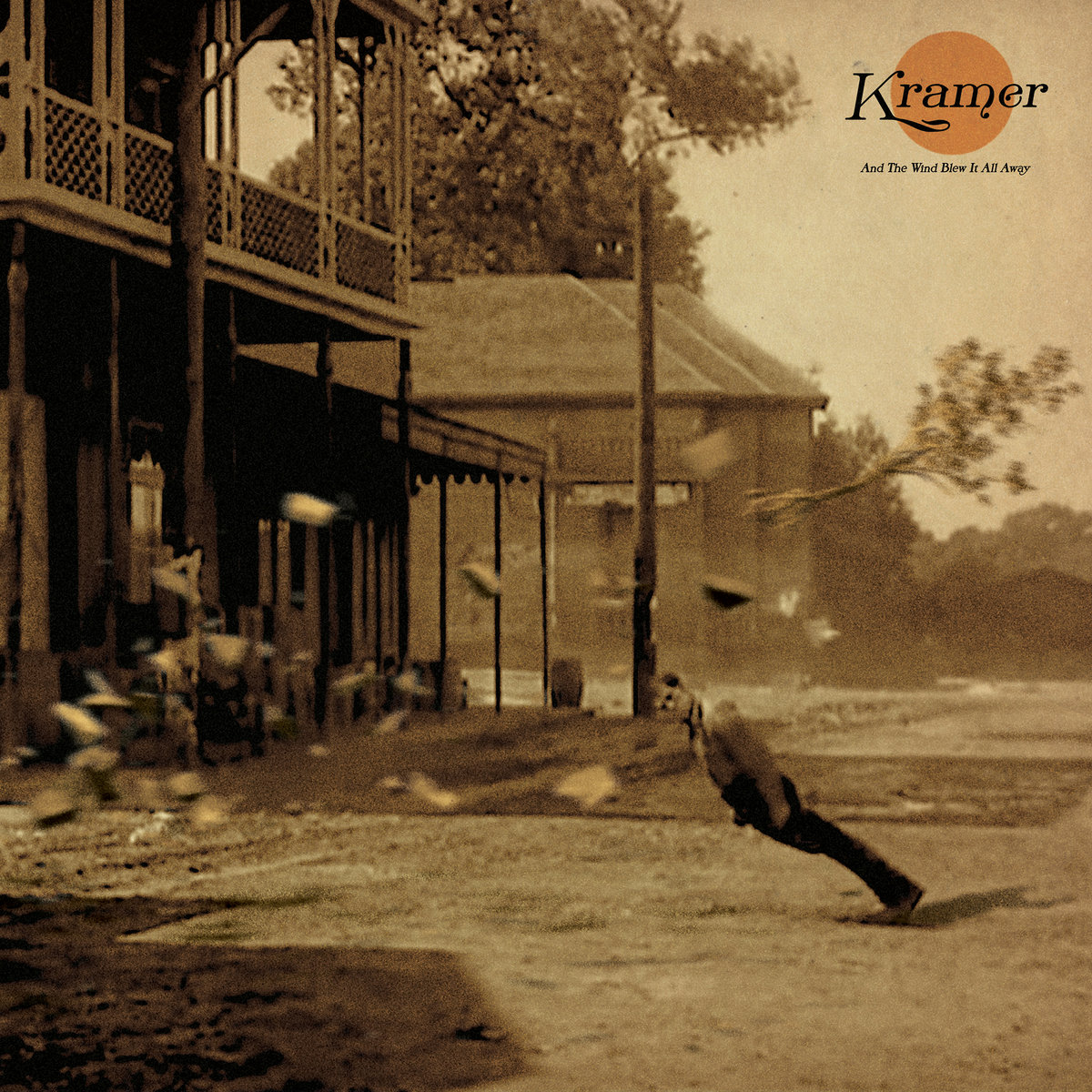 As I write this the world, our world, teeters on so many brinks you’d need a scorecard the length of a miracle mile just to stay up to date. No need to cite specific examples as that previous sentence sent the lot of them spinning into a tumbling blur as if in a lottery drum turned by the hand of a non-existent or at least very disinterested god. The only thing certain is uncertainty and yes that’s maybe how it’s always been when looked through a particular lens but the truth now is that every lens portends the same, the view through every glass fogged over in smoke and chaos, not a whit of which of course even covers one’s own personal circumstance. It is into this midst that Kramer’s new solo album, the first in some twenty-three years, arrives with the only type of breath that could qualify as ‘refreshing’ and that is an unrelentingly honest one.

Soft-spoken with an out loud heart, facing head on – no flinch allowed – his own foibles, those unforced errors of a very lived life while powering through his doubts with a humility that acknowledges the pain caused and the pain felt, the two echoing against each other in an empathetic if oddly disjunctive harmony, And The Wind Blew It All Away, released December 3rd on Kramer’s own lovingly revived Shimmy-Disc label, is a record that speaks to the upended, near surreal state of all our lives here in the waning days of 2021 without whispering a word of its cause. Like a reluctant seer refracting what he sees through the prism of his own experience, Kramer’s voice here, both the authorial and literal, has a dream-like, allusive quality that somehow manages to both put your nerves slightly on edge while soothing them in the same instant.

Having over the past couple decades or so become increasingly enamored of the singer-songwriter genre, it can’t surprise that ATWBIAA presents, ostensibly anyway, inside the gentler waves that category would suggest. And, to be sure, there is a softness here that might surprise those that still place the name ‘Kramer’ in a box marked ‘Bongwater/Butthole Surfers’ but in truth it’s a creative trajectory he’s been on for some time. This is, after all, the Kramer that, over just the past five years, has been responsible in large part for those brilliant ‘Brill Building’ albums and a remarkable collab with Jad Fair, not to mention producing Emily Rodgers‘ past two full-lengths and that’s just a handful of examples. That said, however, this is Kramer so the product at hand isn’t going to be without a certain level of restless electricity and variance. In attitude and emotion these songs come at us with what we can only call a full-throated hush of sorts, fully aware of their own vulnerability while not backing away an inch from the precipices they inevitably lean toward. Be it the ghostly calliope-like aura lurking on the fringes of “The Crying,” “In Absentia,” delicate yet, again, adamantine as its seemingly fragile structure gradually finds itself offset by a subtly unsettled backdrop that would feel anomalous were it not in perfect pitch with the title’s lyrical context (“we are together in absentia“), or the melancholic grace that carries the tender aspirations of “The Rain” across its own bridge of sighs, this work that would seem to inhabit that shrouded cinematic space each of us has hidden inside us where thoughts murmur and memories lie across each other in tangles of love and yearning.

In the end, And The Wind Blew It All Away looms up as a work of shimmering courage despite its author’s doubts. Not to get too cute but, from the evidence here, Kramer doesn’t need a weatherman to tell him which way the wind blows, he knows it blows around him in circles, the artist at the center, in the eye of his own quiet storm. Just as we all are.

[And The Wind Blew It All Away available here. Read interview below stream]

1. What was the primary impetus behind resurrecting Shimmy Disc? Must have been a daunting list of pluses minuses but assume it came down to having a secure home for not only your work but that of the Emily Rodgers etc of this world?

To be entirely forthcoming with you about the reason for the resurrection of Shimmy-Disc, Dave, i’d need to confess that the primary reason was the SOLE reason; Karl Hofstetter at Joyful Noise asked me to do it. And if – while i was getting over the shock of being honored by Joyful Noise having named me their 2020 Artist-in-Residence – someone had told me that i would soon also be asked if i had any interest in reviving Shimmy-Disc, i would not have believed it. Re-starting my record label was not even a miniscule blip on my most distant radar. as regards the “minuses”….I’m not sure if you’re privy to how it all ended in the 1990’s, but it did not end well, and it was more than just a tad traumatic for me, as any Mack-Truck lawsuit gleefully drawn out over five years might traumatize anyone under its wheels. i had a newborn daughter when the firebombing began, and a personal vendetta to render me homeless and without a recording studio had succeeded. only a psycho would reinvest himself in such potential trauma. But 20 years had passed, and Karl presented me with a proposal that seemed like a no-brainer. i had but one condition for diving back in, and Karl enthusiastically agreed to it. so the only reason to say no would have been that i had finally succumbed to Sloth, and/or an utter disinterest in music. thankfully neither had yet to befall me, and Karl’s encouragement was so, well, so encouraging, i agreed to try again. We’ve been at it together for about a year now, and i’m thrilled to once again be doing what i think i do best; LISTENING for musics i never heard before and releasing only what i think is the very best of it. and perhaps in between those endless endeavors, composing and recording my own music again, which i had lost all interest in when Shimmy-Disc found itself the target of an immorally fueled scorched earth campaign and slowly dissolved like salt in a wound, so long ago.

2. Seeing as And The Wind Blew It All Away is, as the blurb says on the just-released boxset Make Art, Make Love, Die of which this album is a part, “the culmination of [your] decades-long commitment to (and unwavering Love for) the Masters of the singer-songwriter genre,” could you elaborate on how that love has – or hasn’t – affected your process, how you approach your material etc? (And, if you care or dare to, cite who among those singer-songwriters have struck you the deepest…aside from Leonard Cohen whose “Winter Lady” you cover on the record).

From my early teens onward, I grew up devoted to John Cage, Morton Feldman, Arvo Part, Harry Partch, Charles Ives, Tony Conrad, and…my deepest attraction to what was happening “NOW” (once i emerged from the other side of my Beatles obsessions), was in Fripp & Eno’s NO PUSSYFOOTING, and Eno’s original OBSCURE RECORDS label. i heard John Adams and his SINKING OF THE TITANIC and knew that this was the road i wanted to travel with music. I loved Terry Riley, Charlotte Moorman, LaMonte Young, and Yoko, and i listened VERY carefully to the first few records by THE RESIDENTS. I felt certain that there was soon to be a place where art, pop music and the avant-garde would meet, and i felt that people like John Cale, Captain Beefheart and Laurie Anderson were among the first to prove that. I also listened to an awful lot of the piano inventions of Bill Evans, and I still do. But at the very same time, i was also deeply in love with the great singer-songwriters. If not for Townes Van Zandt, Nick Drake, Judee Sill, Guy Clark, Nina Simone, John Lennon, Michael Nesmith, Sandy Denny, Brian Wilson, Caetano Veloso and others, in equal reverence with songsmiths and producers like Lee Hazlewood, Joe Meek, Phil Spector, George Martin and others who did more to craft the final results of an LP than the singers they were producing did…i’d just be a bespectacled composer living in poverty right now, had not the songs created by these folks and others distracted me from what i can only assume was my natural path. One obsession informs the other, and together, they have not simply affected my process, but (i think) defined it. the composer inside of me is an elitist snob. the songwriter inside of me is just an American boy following the age-old tradition of endlessly falling in and out of Love while writing and singing about it to the best of his limited ability.  And in his humble opinion, Dylan had no business being awarded a Nobel Prize. Leonard Cohen, on the other hand, did.

3 – Your year-long artist-in-residence status with Joyful Noise is coming to an end. How’s that experience been and what’s next, assuming you’ll have sufficient time/energy outside running a label again?

I don’t ‘manage’ the label anymore, so it’s not the same as it was way back in the 20th century. I’m simply the ‘Head of A&R’ now, and so far, it’s been a heavenly experience, thanks entirely to the professionalism and ecstatic talents grinding away 24/7 behind the scenes at Joyful Noise. so, as a direct result of the working relationship i enjoy with them, I’ve never been more busy as an artist. The team there in Indianapolis handles everything i can’t, and that leaves me ample time to immerse myself in my Self and express what i’m seeing and feeling in there, along with what the world looks like to me from deep inside that bottomless pit. I spent 100% of 2020 working on the music in my AiR 5LP box set, and nowadays i spend about 90% of my time working on my own music, on collaborative projects, or mixing & mastering one of the Shimmy-Disc releases, of which there will likely be about 6 each year.  among those will be part three of my Cinema Series (which began with one of the LP’s in the box), and a new LET IT COME DOWN project with a new collaborator. at this very moment, I’m working on a brand new box set; a collection of seven 7″ EP’s running at 33rpm, each one a different collaborative effort, tentatively scheduled for release at the end of 2022. i won’t name names yet, Dave, but once the work is behind me, you’ll be among the first to know