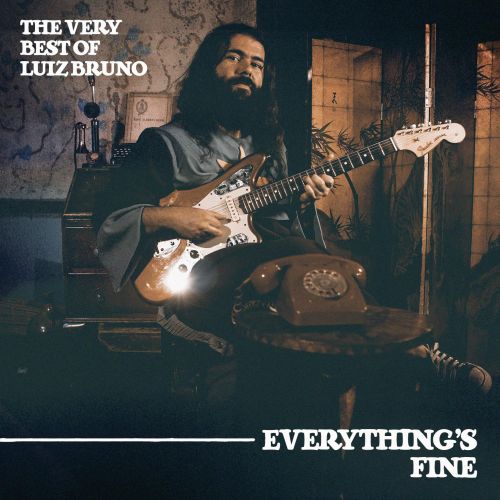 Brazilian native and London-resident Luiz Bruno is a multi-instrumentalist and vocalist who began playing music at a young age. After his move to England in 2013, he started playing in psychedelic bands and toured solo under the moniker I Know I’m Am Alien.

Now creating music under his real name, Luiz Bruno debuted musically last year with the double A-side “Yeah” / “Words Are Not Reality”. Those two tracks are now part of a 12-song album titled Everything’s Fine that Bruno is releasing this month.

Stereo Embers is pleased as punch to host the premiere of the whole LP, which was mixed and mastered in Brazil, before its official release. It drops digitally imminently and will be available on CD and vinyl this December and in January 2019 via Take One Records.

Everything’s Fine is a flavorful smorgasbord of lo-fi space/psychedelic rock, ‘80s New Wave, and funk (sub)genres. Dynamic and catchy, and just a little wild – Well, okay make that pretty wild, and sonically with Bruno sing-talking his lyrics. The serious and the fun co-exist on each song, with thought-provoking lyrics blending together with the off-beat instrumentation and vocals.

Bruno’s lyrics take the listener on a trip through the mind as he navigates this rocky modern world. Anxiety, fear, self-doubt, and uncertainty loom at every turn, and Bruno deals with these unstable emotions by delving into the mind. He touches upon shamanism, madness, and other psychologically related topics on his songs.

About the album’s title, Bruno explains, “The record was originally going to be called Mental after the track of the same name. Then it was finally decided on Everything’s Fine, and that’s how I pretty much feel sometimes, like I may feel like I’m losing my mind one minute, then I have [a] deep feeling of peace and I remember that everything is actually okay. It’s a kind of [a] schizo place my head.”

Lead single “Mental” tackles the craziness that the world was going through last year, while second single “The Ballad of Cool Lane” is melodic and gentle – a hopeful antidote to our dark times.

Spacey keyboard runs and a jumpy beat bounce through “Words Are Not Reality” (although words can surely impact and shape reality…). The title track slows it down with winding synth notes and a laid-back pace.

A musing (and an amusing) Bruno sing-talks, “I ask myself the same questions over and over… / I ask myself from time to time / Am I going crazy again?”. His answer a moment later is that maybe there’s nothing to understand. A spiritual mantra? Maybe. A way to disconnect from the insanity of our lives? Definitely.

Find out more about Luiz Bruno