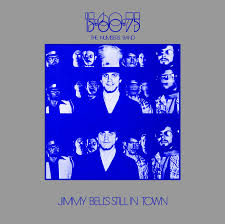 Not to tar them with too obscurantist a brush, but 15-60-75, AKA the Numbers Band, is quite possibly this country’s greatest under-known cult band. I’d reckon a fair percentage of music scribblers, generally an obsessively curious bunch, are still to this day unaware. My own ignorance was only addressed while researching a long piece on the wonderful Human Switchboard for this very magazine back in 2011. That’s actually a slight misstatement: I knew I’d heard of them in passing but had never been compelled to investigate and as regards a band of this significance, relative ignorance is no different from full-on.

As made clear by this recent double-vinyl reissue of Jimmy Bell’s Still In Town on Exit Stencil Recordings, cultish obscurity sometimes shouts louder than the most eminent classic, comes bolting out of the shadows with such a fury of assurance that anyone that hears it shakes their head in silent disbelief, How’d I miss this? How did anyone?

Essentially a midwest American blues-based, jazz-inflected bar band with a heavy added dose of ‘so much else’ (Beefheart does R&B, for starters), 15-60-75 was originally hatched in Kent, Ohio by the then-core duo of guitarist/singer Robert Kidney and sax player Terry Hynde (whose younger sister was, yes, named Chrissie, just to get that out of the way), playing live for the first time at local hotspot The Kove in 1970. Over the next few years, into 1972, the band would hone their already considerable skills as a live band while also, as it turned out, proving to be an incubative hothouse for other Kent State-based musicians – Chris Butler, Gerald Casale, the latter 86’ed from the band for donning a monkey mask on stage – that would go on to wider renown. By the end of ’72 Kidney would dissolve the band to join his sax- and harmonica- and organ-playing brother Jack’s band King of Hearts, which, within a few weeks, mutated into a brand new Numbers Band, roping in Hynde, bassist Drake Gleason and eventually luring ex-Number drummer David Robinson back behind the kit. It was after further securing the services of second guitarist Michael Stacey and third saxophonist Tim Maglione that the line-up responsible for this live debut album was set.

Those were feverish, tumultuous years, 1969-72, that also happened to put a premium on shit-hot musicianship and that combination of urgent impetus and chopped up tight playing is among the most striking aspects of this long overdue reissue. Redolent of its time, amped up and juiced, Jimmy Bell’s Still In Town – along with the band themselves – also gets stamped, in both deep blue and danger red, with the tag ‘vivid precursor.’ There’s not much margin for argument in asserting that what we all love about the fervidly off-kilter scene that would, in the blink of a year, emerge out of nearby Akron, has its sparking, spanking livewire origins in this explosive little group that time came too damn close to forgetting.

Immediately we hear them, the hints of the many branches this legendary band seeded. In the way the horns, just for a moment but frequently, seem to stray mischievously off-chart it’s easy to hear forward to the canny zaniness of Tin Huey, while in the initial electric prowl of guitar on “Animal Speaks” the concise outré language of Pere Ubu sneaks in (before Stacey just carries it away in an offhand master-class display of the precise roadhouse shred). And certainly, throughout, in the adrenalized lurch and pitch of tempo it’s not too difficult to imagine a studious Mark Mothersbaugh at the back of the room already mapping out the herky-jerky Booji Boy choreography of his stage persona. But you know what? Screw all that incipience and Pete Frame-ish rock tree business and just get down and get real with this cracking, unshowy, bristling set from one of America’s premier, no longer unknown, rock ‘n’ roll-gone-marvelously-askew live bands. Listen up.

“Animal Speaks” and “About The Eye Game” are announced by Robert in the plainspoken voice of a compere just doing his job, a near flat affect to his tone that carries over, in a way, to his yeoman’s performance inside the songs. It suits, the words coming at you as if there’s just some earnest, lightly emphatic fact-statin’ going on in the center of things while the world around goes a bit haywire. In the truest sense of the word, the singer is the band’s anchorman. Without him, who knows, they may have been unable to stop themselves from trailing off the rails in furious lickety-split torrents of joy, skronk, unchecked enthusiasms and unpeeled licks – from the guitar, sax, harmonica, drums, from whatever damn instrument any one of them laid their hands on – that sizzle and corkscrew and intertwine in ways that are as dizzy as they are busy as they are brimmingly brilliant. Wildly precise and confident, 15-60-75 on this recording are what would result if one were to shoot a hypo of Stooges energy into Little Feat.

Every song is a groove laid down as if life depended on it. “Narrow Road” takes that urban Shaft funk thang and stirs it into a restrained frenzy, “About Leaving Day” has a mixed horn/guitar chart that gets so far dowwwwn it’s off the charts while “Thief” – the weakest track here if you had to pick one but I doubt you’ll bother – walks the Buick Le Sabre electric streets like a panther, its tale of a robbery perpetuated on the wrong person on the wrong night bursting with a prowess of simmering noise before slipping with a jungle grace into “Jimmy Bell.” Built around a barely known 1957 number written by folk blues artist Cat Iron, the Numbers give it a swampy, Freddy’s Dead-goes-Polk Salad Annie hoodoo vibe and the thing’s a showpiece with mojo coming out of its ears. Gleason and Robinson (and someone thumping bongos) are dug so deep in the pocket it’s a wonder they ever found their way back out, Jack’s sax takes the virtuosity of jazz and feeds it giant spoonfuls of rock ‘n’ roll sex while later on Stacey’s guitar playing boils up out of the groove and nearly unravels, tripping adroitly over itself even as it keeps the crunched ecstatic core of the piece fully in its crosshairs. This is some serious juju, folks, mindblowing in its ability to tighten the screws while levitating the roof clear off its soffits.

Whereas it’s reason enough to grab this record just to have this sweaty and historic slice of rock’s neglected legacy, the three add-on bonus tracks are themselves none-too-shabby, comprising a raging, raw and wounded tearaway of “Who Do You Love” – just Robert on acoustic and his brother Sonny Boyin’ away on harp – that sounds like it was recorded on a lying-around cassette recorder, and two additional full band live outings, “Drive” (flaring, intense) and a white lightnin’ and benzedrine charge through “Keep A-Knockin’ (But You Can’t Come In)” so breathlessly prosecuted one hopes tanks of oxygen were available behind the bar.

At the mike to introduce “Drive,” Kidney, after thanking the audience for coming, says “If you’ve never seen this band before, the name of it is 15..60..75. On Wednesday, Thursday, Friday, and Saturday. Wednesday and Thursday for free, and Friday and Saturday for one dollar,” and there we have in one mere moment of self-promotion the key at least to the extraordinary workmanlike frenzy these guys were able to whip themselves into nightly: already-talented musicians engaging in the age-old tradition of working their asses off. The result is an American treasure too long denied that status. Step up, right now, step up and dig it.