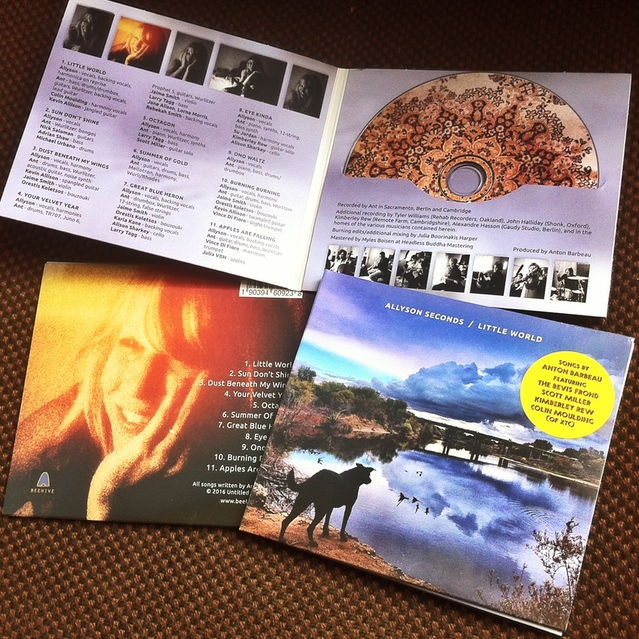 As the old axiom that we might have just made up goes, good things can come when you don’t even know you’re trying. Teaming up again, as she did on 2009 debut Bag of Kittens, with psych-pop colossus/auteur Anton Barbeau, whose Magic Act album back in March woke us here at SEM out of our heretofore unfortunate slumber when it came to the guy’s particularly acute pop facilities, Allyson Seconds’, umm, second album began its gestation as just a couple of simpatico pals getting together again in a Sacramento studio and throwing a couple tracks together at the beginning of 2015. Though neither precisely knew it at the time, that modest handful of tracks provided the stealthily fertile seeds that would grow into Little World. The result, despite being ultimately tinged by a somber understanding of the effects of climate change on that little world that Ms Seconds was witnessing first hand in and around California’s capital by the time Barbeau returned from Berlin in September, is nonetheless an uptempo darling of a record. Which is to say that, while that direct personal perspective, fed by record high temperatures and enormous wildfires feeding on an historic years-long drought, is clearly evident in a number of the song titles alone – “Sun Don’t Shine,” “Dust Beneath My Wings,” “Burning Burning” – in the end, even if the balance overall shades toward the reflective, none of that detracts from the spangled pop glory of the album as a whole. This comes as no surprise, of course, as neither Seconds nor album songwriter Barbeau (nor the fair cadre of supporting players asked to color in the spaces here) can help it. The tropes of addictively catchy songcraft run with a drunken glee through both their bloods, turning anything they touch into autonomic pop of the first water.

Thus the title track, while underscoring the urgency of Seconds’ concerns, burbles with the type of untampable energy that harmonizer Colin Moulding’s little Swindon-based outfit was known for, “Sun Don’t Shine” enjoys the bright Frondian blessings of some of Nick Saloman’s sustained guitar presence blasting out from the center of the thing with a similar – if a touch fuzzier – fury of elegance as Steve Hillage brought to Kevin Ayers’ “Shouting In A Bucket Blues,” “Your Velvet Year” trades in some passing lysergic synth pop, Juno 6’s and Prophet 5’s dancing through the heavy-light syrupy swoon with an agile, airy bassline and a vocal melody made out of spun sugar.

Of the guest appearances, which beyond those mentioned include Kimberley Rew’s boldface-typed solo on the tip-toeing, piano-twinkled lovenote “Eye Kinda,” Cake alumnus Vince Di Fiore offering a dusky, valedictory trumpet solo on hopeful lament “Apples Are Falling,” and Greece-based pair Jaime Smith and Orestis Koletsos (violin, bouzouki, respectively) lending a timelessness to the troubled funk-pop textures of “Great Blue Heron,” certainly the most poignant among them is the late Scott Miller’s searing yet elegiac turn on the electric midway through “Octagon,” an otherwise delicate enigma of a track that nonetheless incorporates this ghostly, lovingly frayed burst of pure emotion as if the rending is an integral part of the fabric. Brilliant.

So, yes, this world turns in every more stumbling circles, the challenges monumental and mounting, the will to confront them of dubious merit. The hour is, indeed, getting late. And yet we see – and hear – glimmers, some of them, as here on Little World, embedded in lustrous pop mosaics that add with a kind of dizzying élan to the growing global chorus one buoyant voice at a time.