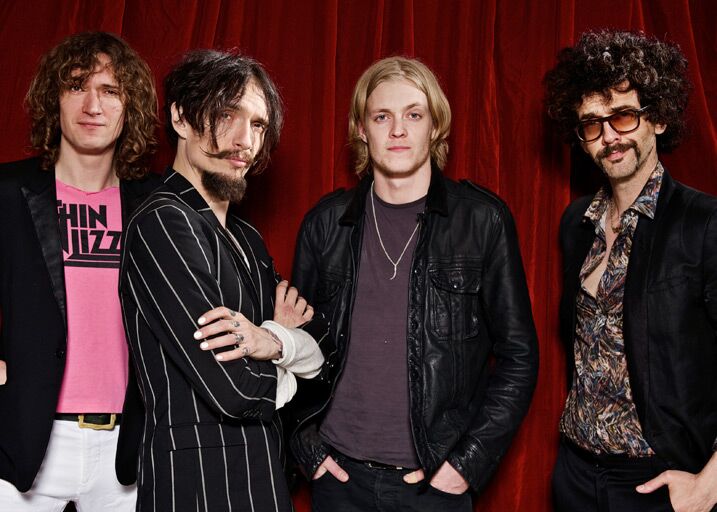 (Photo courtesy of The Darkness)

The Darkness are one of the most dynamic, energizing and thoroughly entertaining bands around.

The Suffolk outfit’s latest album Last Of Our Kind is a searing blast of crunchy hard rock, unforgettably anthemic choruses and post-ironic bliss.

Led by the Hawkins brothers (Justin and Dan), and rounded out by bassist Frankie Poullain and drummer Rufus Tiger Taylor, who is the son of Queen’s Roger Taylor, The Darkness have never sounded better.

We got a chance to chat with singer Justin Hawkins while the band was in between dates on their recent tour.

Stereo Embers: My earliest memory of you was an impossibly high-pitched  tenor on “I Believe In A Thing Called Love” which was accompanied by a glossy MTV video which I watched endlessly as a teenager. How has your approach toward what is emphasized in your videos changed?

Justin Hawkins: We have less money to spend on them. Before we would spend days on brainstorming, now we don’t have that much time to think of things to include in our videos. We would be doing spaceships, crabs and using holographics if we could afford it.

SE: What is it like being the lead singer for a rock band?

JH: It is like a job that you do. You say “I’ll do this for a bit.” Once you’ve been doing it for awhile,  it absorbs all of your energy, you become the job, and everything else around you falls away. It’s a bit like a journey into a black hole, in a good way. All I can do now is be in a rock band.

SE: What is it like being back together with your band-mates. Are these the same guys you used to perform with?

JH: These are the same guys with the exception of our drummer, Rufus [Tiger Taylor]. He has a vibrancy, and is young with vigor and vim. The whole band has a real relish. These are things that can be absent when you’ve been doing this as long as we’ve been doing it. You can’t put a price on it.

SE: What are  the most frustrating or stressful aspects of your career?

JH: It is difficult because you are away from your family all the time and that can create problems with a partner. If you have an understanding partner, you can make it work.

SE: Has your label constricted your creative process?

JH: No, we are the label. We basically make the record and the videos. That situation never arises now; the days of The Darkness being a major label are over.

SE: How do you like to recharge your batteries when you have a break?

JH: I like to run or watch TV-wait, no I haven’t got a TV! Or sleep or eat or masturbate-the usual stuff really.

SE: I’ve heard your new album on Tidal. Any thoughts on the new streaming platform?

SE: It’s a competitor to Spotify that allows audiophiles to listen to albums in CD-quality on their high end rigs.

JH: Does it pay better than Spotify?

SE: Tidal pays artists better than Spotify and Jack White and Prince have exclusive content on it.