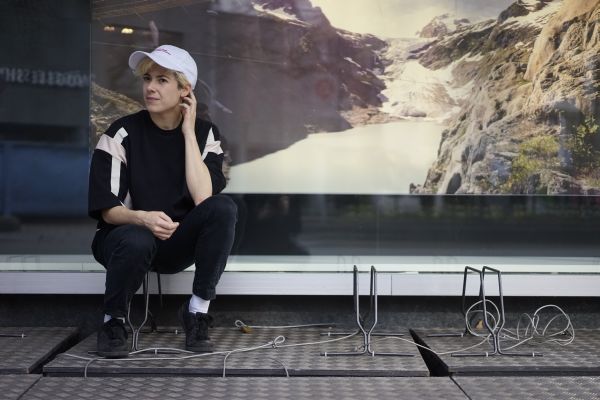 I still remember the day when I received Odd Beholder’s debut, an EP simply titled Lighting. It was a subtly and sublimely captivating release – the type that makes you lose track of time, where you catch yourself drifting into daydreams. The fact that Daniela Weinmann – the artist with the silky, detached quality to her voice – had a promising future in music ahead of her was quite apparent from the start.

Soon after, the Remixes EP arrived, along with more daydreaming to the beautifully cool tunes. While a full-length record was the expected path, what recently came out is a remix EP full of dancefloor-friendly versions of some of Odd Beholder’s older songs. It was a batch put together by the likes of Kalipo, Alessandro Giannelli, Hundreds, The/Das, Fejká, and Thomas Atzmann.

While the world wasn’t waiting for a remix EP from Odd Beholder at this stage in the musical game, it’s a welcome, and funky, surprise and one to get the body, and mind, moving in mysterious ways. Atlas spins its disc this March 29th via Berlin’s finest, Sinnbus Records.

Daniela Weinmann dropped in for a detailed interview to let us know what’s going on in her neck of the woods – and if a full-length is in the works. Read on for the details and take an exclusive listen to Hundreds’ take on “Isometry” below:

Stereo Embers Magazine: Hello Daniela! First of all, thank you for sharing this wonderful remix of “Isometry” with us! Are you a fan of remixes?

Daniela Weinmann: I started writing songs when I was about ten years old. It was the heyday of the nineties dance pop. Remember “Barbie Girl”? The songs on the radio sounded like they were written by children. So it seemed only logical to think that maybe suddenly, out of nowhere, a DJ would turn up and make my songs “cool”. Remixes are a really interesting genre of music because it gives you the chance to reflect on the hidden qualities of a song or of a production. It makes you think about the potentials of a song; the forces within it.

SEM: When you first received the finished version of the remix from Hundreds, what did it feel like playing it for the first time?

DW: The mood of the remix is quite different from the mood of the song; that was my first thought. The original production is way softer, and now that I hear my voice over Philipp’s beat and baseline, I notice a rather cool undertone in my voice. I always strive for a balance between cool and warm when I record the vocals. And since Philipp’s production feels more straightforward, more cool, I would sing the words a little warmer. What I find interesting is that the remix feels faster than the original, but it’s not. It is definitely more danceable than the original. It would be fun to perform it like that on a stage. I like the little pitch glitches in my voice. I like that Philipp brought James’ bass hook and my choir arrangements to the front.

SEM: What is your all-time favorite remix?

DW: I pick the Laurel Halo remix of “Living With You” by John Cale. If I listen to that with my headphones lying on my back on my bed, it really gets me. When I hear a remix of a song, I often hear a fictional management that says: “Oh wow, nice melody. Let’s put a four on the floor underneath it, speed it up, chop the lyrics up, and make it danceable so we can reach even the kind of audience that uses its feet and booty to “listen” to music.” That’s definitely not the case with this Laurel Halo remix, or is it?

SEM: This version of your song “Isometry” that we’re featuring here comes off the Atlas EP of remixes. Can you spill some details about this record?

DW: The EP features two artists from the Hamburg-based collective Audiolith, namely Thomas Atzmann and Kalipo. Then there are two artists that are or were signed on Sinnbus, The/Das and HUNDREDS, Fejká from Ki Records, and Aless Gianelli from the Swiss band Egopusher.

On the EP, you’ll find two remixes of the song “Lighting”, which makes sense because of its tempo and because the original song was already kind of a remix of a demo of mine. Kalipo’s version of “Lighting” sounds somewhat happier than the original. I like the down pitched voice. Then you need to check out the cheeky “All Sun” remix of our song “Moon” by The/Das; cheeky because of its funny sounds and twisted harmonies – and of the idea to eradicate the word “Moon” from the track! Aless Gianelli’s downtempo remix of “Gravity” has a certain eighties vibe. I find it funny that he used a sample that sounds like two drumsticks hitting against each other. I interpret this as a small joke between musicians because he is a drummer of a fellow Zurich-based band called Egopusher. I hear the HUNDREDS remix of “Isometry” as some kind of dark disco. It’s really tight and danceable.

SEM: What about that long-awaited full-length – when can we expect that?

DW: Our debut album, All Reality Is Virtual, will be released this fall. One year ago, I started out with the idea to write a conceptual album about our digitalized lives, but then a lot of things happened to me that I found hard to digest. I think you will hear that on the record. Writing the songs became a strategy of survival rather than a means to reflect on today’s society. That’s why I am not sure if I still want to call it a conceptual album.

Often, I didn’t even have a desk where I could write. I was touring abroad and I was moving from place to place. It took me a while to find a partner in crime; a producer. I carried all these ideas and songs around with me for months.  I was honored by the people who wanted to work with me, but it just didn’t feel right. The search for a producer made me think a lot about my approach to music. I was looking for someone who shares my perspective, my methods; someone who would allow me to play with things. The most important to me was that process would be fun and interesting.

The worst scenario I could think of was working with a guy that throws me out of his studio and shows up later with a neatly produced pop album. I don’t need a guy who knows what he is doing. I want to work with fellow artists; I want to be respected as an artist myself. I was looking for someone to explore ideas with; someone who’s fond of experiments in the studio; someone curious.

One day in November, I wrote Martin Schenker on Facebook that I liked his work and that I wanted to show him my demos. I missed playing my electric guitar, so I felt like showing my songs to a guitarist. At first, I didn’t think of him as the producer of my songs; I just wanted to say hi. A few days later, we met and instead of talking, he took me to his studio and we started working on the album right away. That was the sign I needed. In Martin I found someone who is not afraid of pop hymns but with whom I can also talk about Edgar Varèse, Aphex Twin, or Holly Herndon. We sometimes stood in the studio and thought: “What the hell are we doing?” I love those moments the best. This is what the album will sound like. Imagine songs born out of a lonely struggle. Imagine them produced in communion, with a lot of creativity, humor, and fun.

SEM: Do you have any live shows coming up?

DW: We just came back from a small tour in Italy. Then we really need to finish the recordings. Sorry! I will be in Berlin on the 12th of April at a book launch at Espace Diaphanes. Donat Kaufmann and I contributed an article about smart curation and pop in the age of Spotify in a book called SCRIPTED CULTURE. Yeah. We’ll see what the summer will bring. It’s the 50th anniversary of the summer of love after all.

SEM: In closing, what are your projections for 2018, as far as the music world is concerned?

DW: Three things come up in my mind. I’ve been thinking a lot about live music lately. I have the impression that people might get sick of all those laptop shows. I expect more acts to play live again. Like, with real musicians. Me too; I am planning on rehearsing with more people; playing as a duo is very limiting. But who knows… Maybe it’s just my wishful thinking. These things are also a matter of relationships and artist fees. Second, I have been thinking about customized music. I lately made an art performance during which I turned the secrets of my listeners into songs. And third, I wish I had the money and the time to investigate virtual reality music videos or concerts. A while ago I was at an art exhibition which convinced me that VR has the potential to be a really poetic medium.

Find out more about Odd Beholder