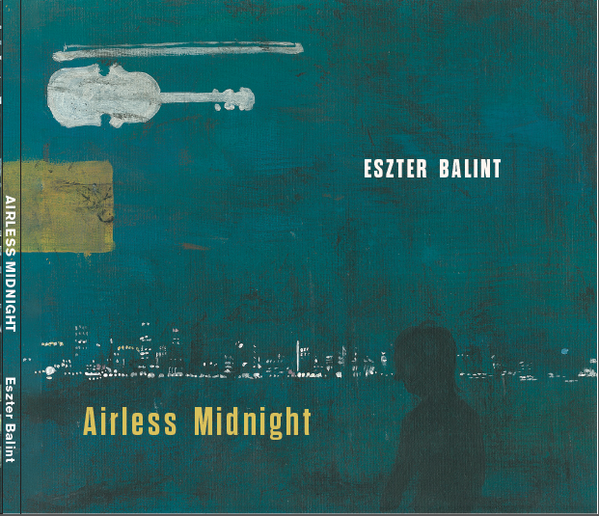 You can be given all the advantages – raised in a relatively hyper-artistic environment that’s soaked in both old country tradition (Hungary, say) and contemporary artists of all disciplines during NYC’s most fertile creative age of the second half of the 20th C., be the product of two avid, adventurous theater minds, have in your midst from just before and through your burst into puberty a dizzying swirl of filmmakers, musicians, writers performers and painters – and there’s still no guarantee you’ll emerge as a formidable artist in your own right. The human spirit, after all, is remarkably inventive at conjuring somehow seductive paths full of destruction and distraction. Add to that the weight of implied expectation and the chances of opportunity squandered is conceivably greater than success. It’s a lot to carry. Fortunately, violinist/singer-songwriter/musician Eszter Balint has never thus succumbed, hasn’t in fact seemed to have given it the briefest thought. Instead she’s accepted her considerable gifts with a shrug of grace and inevitability and gotten on with it, appearing in a slew of influential indie movies – most notably Jarmusch’s Stranger in Paradise but also Buscemi’s Trees Lounge and Woody Allen’s Shadows and Fog – and, doubly fortunate for our purposes here, turning her energies fully in 1995, at the age of 29, to music, resulting in two JD Foster-produced albums of luminous, thoughtful songcraft (debut Flicker in 1999, follow-up Mud in 2004), after which a parenting break that was a bit more fraught than that neat phrase makes it sound and hence a return to writing “to keep sane.” Fresh from a rare return to acting – in Louis C.K.’s series Louis – Balint comes back to us with third album Airless Midnight. As per the title, it’s a darker and dare I say more mature work. It’s also a damn fine album.

Though naturally aligned as a cross between Suzanne Vega and Carla Bley, the singer may be more accurately positioned in the triangulated center of writers such as Joe Henry, Michael Gira (with whom she’s worked), and Jim White, if only in terms of there being a similar and commensurate amount of artful grit and unflinchingness. Once again working under the production guidance of Foster as well as enlisting the deft talents of longtime guitar cohort Chris Cochrane – who’s joined in the guitar corner by no less than David Schramm and Marc Ribot – and a host of other crack contributors (the studio must have at times resembled her childhood home), Airless Midnight roams the streets of the psyche after dark taking oblique but epiphanic snapshots and scratching out observations with a sculpted efficiency. These are songs Raymond Carver couldn’t help but dance to.

“The Mother,” an elegy of sorts to maternal sorrow following a son’s homicide, hangs thick with a folky psycho-noir air you could cut with a knife, “Departure Song” uses a dusty disorienting twang and a banjo shadow to leave you parched and lonely on the tarmac, the churning and snarkily earthy “All You Need” excoriates any and all ideas of male supremacy with some of the sharpest wit this side of Dorothy Parker, albeit a bit more oblique as befits a lyricist of Balint’s stature, while “Exit at 63″‘s astringent empathy, coupled with its sparse, string-scraped reverb, makes for an elegantly grim rendering as it grapples with mortality, the lights dimming far too soon as they’re always want to do. With Balint’s melodica gently wandering the halls and Sam Phillips’ sympatico harmonies voicing loneliness with a human angelic lilt, it’s a quiet stunner of a track, you can almost hear the subject’s reflection disappearing from the mirror. 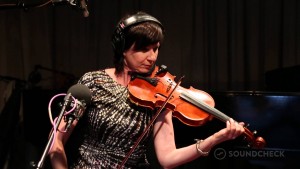 The singer has described these songs as “ripening” during the 11-year interim alluded to above and indeed the lioness’s share of these tracks have a marinated feel, as if they’ve been luxuriating, and budding, in liquefied amber. Even on the cathartic, regret-inviting, caution-to-the-wind charger “Let’s Tonight It” the precise cacophany (including the untamed violin go by Balint) unleashes as a fully developed roar. For fans that have been waiting, everything about this album amounts to impatience canceled, to all sins of absence forgiven. In the end, it’s nothing less than inspiring to see an artist grow into her renaissance status without falling prey to the pity and pitfalls of the Hollywood machinery, and at least twice so to see it happen with such an intuitive, unforced naturalism. The wait may have been great, but Airless Midnight‘s rewards are greater still.