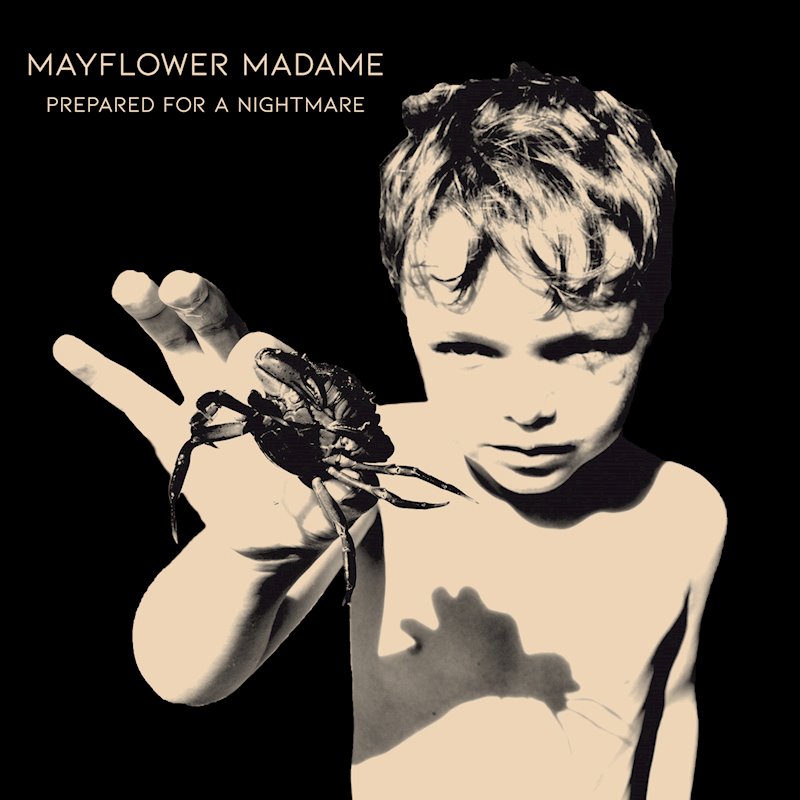 It all begins delicately enough, this prophetic second full-length from Oslo’s Mayflower Madame (they – Trond guitars/vox, Håvard guitar, Ola drums – swear they didn’t know what nightmare there were preparing for, exactly). There’s a gentle creak of synth, somewhere between the lonely whistle of a nightbird and the shimmer of an errant tuning fork, nothing too sinister, but soon enough these tones appear, guitarish tones, they grow as if approaching from a mist and they’re bringing further dark shrouds of sound with them. It’s enough to give you pause, you could swear the air has chilled. You’re already half a minute in and could be pardoned for wondering where exactly you are. Have you been lured into a song as you thought you were or into the shadows of an asylum or ossuary or even a combination thereof? Fortunately, nick of time-like, the drums tumble in and a bass steadies your nerves as a brittle lysergic electric guitar line takes up the melody and while this whole amalgamation isn’t altogether what you might consider soothing – it has, to be honest, its own sense of menace – it at least brings with it the comfort of a recognizable structure, one based on western scales and you can maybe relax a bit now, the nightmare’s over, right?

Ha! Guess again. The nightmare has, in a way, only just begun. This is, after all, the title track and as per design it’s meant to unsettle, an irony since the song itself, once it gains its central foothold, floats through the ether between your ears in an almost (almost) dreamy shoegazey spell.

This is pretty much May Mad’s modus operandi, seduce you with an off-hand sweep of twilit beauty then proceed to set your teeth on edge as you begin to strongly suspect something untoward just might be lurking in the music’s subterranean psyche. Which, for the most part, would be fine except for the fact it’s pulling you in with it, its force inexorable. How the band manages this isn’t itself such a mystery – in a way similar but distinctly Nordic (perhaps) to Echo & the Bunnymen, there is a touch of an acid-washed quality to their brand of post-punk, as if the songs have been at least occasionally filtered through a psychedelic wind machine – it’s just a stylistic choice (or compulsion; one doubts there’s really all that much ‘choice’ involved) that’s harder to pull off than it might seem, especially with such persuasion as we find on Preparing For A Nightmare. Buoyed by portent, fringed in anger and/or anxiety, there is nonetheless an oddly – and OK, darkly – joyous undercurrent on offer here, beyond witnessing May Mad’s continuous growth down their uniquely sinuous path.

That path, preliminarily mapped out by the also well-named Premontion EP from a year and a half ago or so, takes us past the pulsing aggro and finesse of the harrowing first single “Vultures,” the ticking pop mystique of “Swallow,” “Sacred Core”‘s stark narcotic fog bank, draws us down into the echoey depths of “Gold Mine” that suggests the dizzying paradox of a claustrophobic expansiveness before the record eventually ends, a bit trickily, in an “Endless Shimmer,” a relaxed if no less charged – and head-noddingly lovely in its way – parting shot that proves dread is no less palpable when cast in slower motion.

It’s quite the immersive trip, embroiling you in the buzz of modern life tension while bewitching you with the implied escapism of those psych guitar grooves that, in fact, by the laws of twisted irony, only ensure that there is no possible escape. Our guess, however, is that the first track you’ll want to revisit as you step back out of this album, blinking into the sunlight, will be “Ludwig Meidner.”

Pounding with a Gun Club-meets-Moodists energy, this paean to the German expressionist painter and printmaker and creator of “Apocalyptic Landscapes,” shudders with power, the rhythm section by necessity tight but damn near feral with it, the vocal animated by a desperation of purpose, not least, for instance, when turning the phrase ‘dancing on your grave’ vengeful glee to an act of affinity. it’s the exception on Preparing For A Nightmare that proves the Mayflower Madame rule: this band is intensity no matter the tempo. It’s not unusual by any means to find artists using various levels of restraint to powerful, even explosive ends (one need search no further than Low, for instance), what’s rare is to find it being done with this level of craft. [find Preparing For A Nightmare on LP, CD, or digital here]