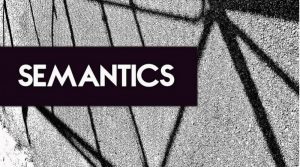 As you may well guess, not everything that crosses the post-punk desk here at SEM unbidden merits much beyond a cursory nod of acknowledgment and a terse but gracious ‘thank you.’ But, well over half the time – 70% or so, maybe? – we’re more than happy with what the virtual letter-carrier has brought and on semi-rare occasions we’re just bloody thrilled. Finding the Birmingham, UK-based Semantics in our inbox a couple months back was, most certainly, one of those latter instances.

Hitting their marks square on with an almost brash easy on their self-titled debut EP, the foursome (Rob Lilley vox/guitar, Simon Lees drums, Bridie Green guitar and Josh RB bass), as we pronounced back when they first came in through our transom, have an inherent (and inviolably melodic) knack  embracing borders, reeling off four tracks here that, beyond exuding what we’re dubbing – and may even copyright – ‘classic sonic noir,’ their sound full of the requisite shadows and angles and brooding sang froid narrative, also inject their moody shades of post-punk with a narcotic blend of sly signifiers.

Added to the previously-covered “Ocean” we have the dark romantic lure of “Limits,” a track that’s half confessional inquiry half desperate invitation to a lover, the menacing cinematic undercurrent of which sounds like something Mancini might’ve come up with for the Peter Gunn theme had he heard Joy Division in his youth, “My Detainer,” which would pretty much be an epic, beautifully lugubrious ballad were it not for a soaring guitar bridge – and coda – so dynamic as to boost it into stratospheres we generally reserve for the Sergeants and Borlands of this world, and the bass-thrumming thrill of finale “Games” that has a certain glancing Bauhausian flavor to it even as it boasts a rhythmic agility that not infrequently eluded the original goth-fathers.

What this genre exploits and in fact depends on for sustenance is the existential tension each of us feels pretty much every second we’re conscious. It’s that tension that grabs us, holds us, makes us its hopeless but ecstatic prisoner for the rest of our days. The trick for any band (and anyone for that matter) is to stand steadfast in the face of dread, and Semantics, musically at least, hold their ground with what seems a fearsome nonchalance, as if this were just another day of staring down fear until it backs the fuck off. For a band with all of a single EP in their CV, this band looms damned large. Besides the tunefulness and impeccable execution (production and sound are topnotch as well), the four bring a presence to bear that can’t help but suggest a powerful future. 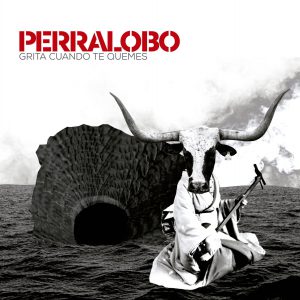 A relatively sunny urban outpost sitting smack in the middle of Spain’s Mediterranean, one might not expect as fierce a post-punk export as Perralobo to emerge out of Valencia, a place that, as its country’s third largest city, may indeed be vibrant and jumping, still has a view of Majorca out its front window. While many and varied will be the responses on hearing this young quartet’s debut, ‘ravey,’ ‘groovy,’ and ‘mellow’ will almost certainly not figure among them. Balearic they are not.

Of course, any of you with sufficient bi-lingual fluency will have sussed Perralobo’s likely darker intentions by the album’s title alone. Translating essentially as Screams When You Burn, the tracks here, if not trafficking in anything quite so grisly as that makes it sound, do seem sparked with the kind of electric energy that comes from dancing through fire.

Made up of five enigmas – Olaf, Metal, Carre, Stella, and Toni; no indication of who does what – the band create a sound shot through with something of a Gun Club drive spiked by the sharper textures native to their continental surroundings. Thus the starched guitar charge that animates initial track “El Camino del Hombre Muerto,” matched by an unhurried tension of a vocal, “Ritmico Amarillo,” all bright pulse and adrenaline, gives the dual impression of a desperate chase along a desolate seaside and a paranoiac dance down the middle of lower Manhattan in 1981. “Intuición Animal” goes straight for the synth-tronic jugular before expanding into more complex climes like it’s constantly in the process of being simultaneously trapped and free. You get the idea. It’s an exhilarating ride.

The breathless “Habrá Sangre” races along with a merciless Wire-y intensity, the atmospheric “Los Astros” glides with an edgy seductive frisson under a shadowy glare (and yes that does too make sense, just listen), “Ardan Humanas” begins as darkwave gone tense and impatient before bursting forth into a finely-layered stormer of a track that we’ll wager is a live favorite (oh how we’d love to find out), while “Nichts ist Für Immer” rides a sonar-like ping into a sunset painted in mood-swing vermillion and jet black, its percussive might insistent enough to wake the dead, in time perhaps to flail their bony arms around to the song’s last minute-plus, when Perralobo, as if to give at least a parting nod to their city-by-the-sea, fall in to something approaching a punked-out tropicalian trance before dissolving into a wonderfully nightmarish chaos.

It’s a fitting end to an album by a band that seems to thrive on standing – literally and figuratively – on the precipice. If this is any indication of what’s prowling about Valencia’s underworld, please, bring it on. Estamos todos orejas. 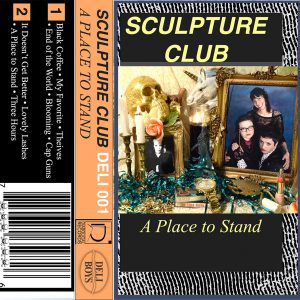 On A Place To Stand, available here as a cassette and/or download though you may want to wait for the vinyl coming from just-(Portland)-born label Cercle Social Records, the band specialize primarily in short sharp jabs that hover to one side or the other of the 2:30 mark, waiting for the home stretch to eclipse three minutes on the final three cuts of this 10-track debut. It’s a smart decision running order-wise as it allows us to get our adrenaline engines good and revved up for the (only slightly) more deliberate glide path to come. As if to underscore this strategy, they open with the caffeinated churr of “Black Coffee,” a quick shot of drum-driven espresso’d pop punk that finds singer/guitarist Chaz proclaiming with a kind of world-weary croon “I wanna be ordinary” (which we rather doubt) while Utah’s most proficient rhythm section – Madison behind the kit, Chris on bass – propel the piece along at a pace we’ll call ‘precision breakneck.’ So goes the next half dozen tracks.

“My Favorite” channels a bit of the descendants of the Descendants, a bit of “Stranded”-era Saints, Chaz wringing some nice brass effects from the neck of his guitar, same as he does for “End of the World,” the damn thing attacking with blasts resembling fanfares, making it quite possibly A Place to Stand‘s most dramatic track.”Blooming,” meanwhile, manages to raise the rafters even as it thunders in the fuzz bass basement of a lurching house party, a sonic aesthetic extended to the entirety of “It Couldn’t Get Better,” a rumbling and hurtling thing that suggests what Nirvana could’ve been had they just stuck to their punk roots (not that I’d have been an advocate for such a thing but it is an intriguing proposition), all of it of course reeling with vocals laced with desperate – and unremitting – pop strains. Of those three lengthier offerings, all good, the pick has to be the title track, making as it does communion with our own Soft Kill’s penchant for dramatically agitated restraint, Chaz’s refrain of “I gave up before, and I’ll give up again / but at least I’ll never give up in a place like this” as poignant an expression of confessional defiance as we’re likely to hear this year or the next.

Through it all though it’s the delicacy of those melodies amid the rough and punky tumble that stand out. This is not a band I ever though I’d mention in the context of this column but if you imagine a scrappier Motors fronted by a punchy Peter Murphy/Robert Smith hybrid you’re closing in at speed. While even somewhat puzzled myself with that comparison I nonetheless know where it comes from, which is Sculpture Club’s propulsive jet fuel drive – even on those back-end tracks there’s a full-tilt careeningness on display – underlying an innate pop sense, as evidenced by vocal hooks that harken all the way back to the Spector years and some sparkling guitar lines that follow melodic suit. In a word, fabulous.