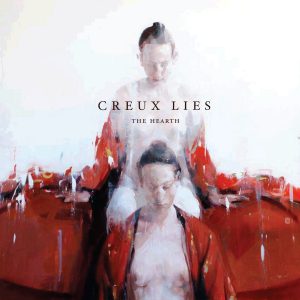 Growing up and growing in to ‘the scene’ in the back-in-the-day Bay Area, it’s safe to say that, aside from being the state capital, Sacramento wasn’t known for much beyond being the birthplace of Tower Records and the original beat from which legendary SF Chronicle columnist Herb Caen, AKA The Sackamenna Kid. And while this is where I’d normally insert something akin to ‘We’d hear whispers of a band called such-and-such,’ the truth is I don’t ever remember that, a memory impression backed by a quick Wikipedia search (the 77’s?). It was, in a certain sense, California’s own Salt Lake City, sprawling, hot, dry and quiet. Now, in a way eerily similar to that cathedral’ed anomaly in the shadow of the Utah Rockies, things have decidedly changed, to the point that it’s now safe to say that were I coming of age and living in the Bay Area in 2018 and news of a band the stature of Creux Lies filtered into my consciousness, I’d be wearing a groove into the fast lane of Hwy 80 to catch them live.

An active, dynamic 5-piece (Ean Clevenger geets/vox/lyrics, Kyle Vorst bass, David Wright synth, Topher Snyder drums, Barry Crider guitar/vox), Creux Lies does in fact play out often, both locally and on West Coast tours, a habit that no doubt accounts for the lived-in quality of this debut released on Cleopatra on August 8th. While as angsty and hounded-by-the-throes-of-reality as you’d expect any young band of this ilk to be, cured in the Cure’s despondency, Ean’s outlook in line with the dour emotionalism that has persisted since this music’s broken Britain origins, there’s nonetheless a Mesh and Lace polish to this work that both dispels whatever preconceptions their locale might conjure and makes obvious why the resuscitated Cleopatra snatched them up. These songs feel lit from within, pulsing with a confidence seemingly immune to the darkness of their settings.

From its beginning, the grandly sweeping sadness that courses through “Silhouette,” through the likes of the modest/not-so-modest epic “Portals” – at six-and-a-half-plus minutes the record’s lengthiest track – that floats with something close to a balletic heaviness, its melody imperishable (Creux Lies’ signature tune? Possibly), “The Unclasping”‘s mournful throb, set to soundtrack one of those long nights of the soul, the crisp dextrous drive of “Tsavo,” to the pounding, subaqueous trance of heart called “Simulacra” that ends the album on a note of sustained, sighing defiance, what we have here in The Hearth is a release – a debut, no less – that rivals Soft Kill’s luminous Savior and ACTORS’ absurdly boisterous It Will Come For You for album-of-the-year honors in the vaunted sonorous post-punk category. At the very least we have to believe that very few records in that or any other genre, in this or any other year, will better define the phrase ‘Off to a stunningly good start.’ [grab The Hearth here] 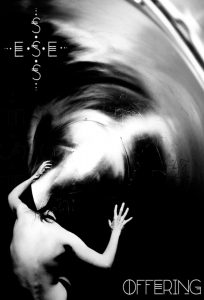 If someone were going to map out the current, ever-efflorescing burst of creative inevitability that is the Oakland darkwave scene, ESSES (‘esses?’ Either apparently, it would seem to go back and forth) would necessarily figure as a prominence above. Along with the likes of Moira Scar and the multiple efforts of Akiko and Gina Marie (Ötzi, Yama Uba, Adrenachrome, I could go on), they are, in post-punk topographical terms, one of the mighty rivers from which flow a dozen tributaries. Put another way, they may font their name in lower case at times but the case for the band’s East Bay primacy of place screams in capital letters.

A driven, precise, sometimes almost mathy goth that tinges into devotional death punk – they pair well with Portland’s Arctic Flowers – esses, on second album Offering, um, offer still more proof where none was needed that here’s a band you could more-than-reliably turn to when you want to know what’s going on punk-wise in the town where, nowadays, there is nothing but there there.

Specializing (as should most, frankly) in, shall we say, short long-players – Offering comes in at a locked-in twenty-six minutes – esses’ approach is, by nature, taut, waste-free, concisely explosive. Whether it’s the scathing melodicism of “Glorious Poison” that launches the record – note the pinging guitar harmonics in the intro; the Edge can suck it – “Fallen Princes”‘ nimble heaviosity, Miss Kel’s Siouxsie-strong vocals nailing what might be called a ‘merciless empathy,’ the trammeling assault of “Mercury” that despite its fiery outpouring manages a deft restraint – I’d say ‘an esses trademark’ but really it’s one they share with any great band within this genre – or the bold if highly-strung experimentalism that marks out final track “Asunder,” its mix of fear, defiance, paranoia and fuck-off femme anger speaking, in an acid-etched paradox, a kind of righteous clarity to the purely absurdist confusion now surrounding us every day, this band (guitarists Dawn Hillis and Skot B, bass player Scout and drummer Kevin Brown fill out the stage behind their singer) will hold your attention with the focused intensity of a single flame inside a pitch black darkness.

esses’ short name, in short, casts a long, penetrating shadow, which is, quite naturally, where all the most intense, interesting shit happens.

[get your esses/ESSES Offering here] 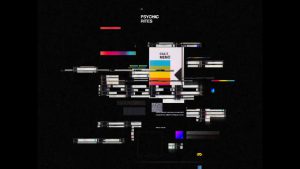 ‘Neon disco doom’ is how Psychic Rites describe that thing that they do so that part of the review? The part where I strive to tell you what the delightfully-named Cult Memo sounds like? That part is done. Those three words, in that pithy order, each of their A-B-A-B-A syllables stitched together in as tight a looseness as you’ll find, speak with a serrated groove precision that no writer, no matter their putative gifts, could hope to better. So, that taken care of, we move on to the particular, the twisting gist and genius sinuousness of this second PsyRi full-length. Neon disco doom indeed.

Emerging out of Moscow ID and now replicating their fine madness in Portland OR (though their presence here, in my experience, is, appropriately enough perhaps, an ostensibly shadowy and aloof one), the trio operating under the Psychic Rites banner – which waves, as you might guess, simultaneously wild and tightly furled – whose names are Mike (songs/guitar/synth), Dave (guitar), and Andy (more synth) waste no time making sure your inner dance floor is shoulder-to-shoulder with every new wave funky robot version of yourself you’ve ever imagined.

“Molecular Curse,” opening with its delicate hammer beat and twinkling synth accents, builds in layers that are somehow equally minimalist and busy, utilizing some peculiar pronounciation – ‘molecular’ becoming mō-leh-kyoo-ler – and solid smart lyrics to get its very persuasive, head-nodding point across. And hell, from there it’s a continuously-stamped ticket to one-way groove central, albeit one where the likenesses of Depeche Mode are carved into lobby frieze with those of Giorgio Moroder, Robert Smith, and a sax-free, askance-looking James Chance, work done with the requisite nods and etched curlicues to French cold wave and a few Neue Deutsche Welle embellishments.

Hence does “Concrete” punch along like the Cure feeling jumpy with paranoia at a Berlin discotheque (“when will they come for me/I’m so freaked out I can’t breath“), the alluringly atmospheric “She” is so effectively Euro-suggestive that Mike sounds half Belgian, “Unwarranted Advice” has a lurking, noir-after-midnight vibe that made me wanna do drugs and stay up all night again (conveniently, that track segues into the aptly-titled “Wake,” all fresh day bass pulse and percolating synth like a caffeinated John Foxx), while “Cherry” goes full-on neon sigh just before “Out of Touch” flirts with the kiss of industrial in its call for prescriptive alienation. All those inferred synth dance party referents aside, however, Cult Memo‘s highlight might well be its most straight-ahead drive into the dark heart of the pounding post-punk sun, “Exercising Self,” which, while no less propulsive – in fact, it may have you losing it in your living room more than anything else here – relives via its classic bassline and nihil-romantic vocals a 1979 fever dream.

Overall, then, what we have here is the future jumping the past in a dark alley just off the brightened nightlife avenues, injecting it with some kind of newly discovered element – let’s call it virilium just for fun – and dumping it into today for our enjoyment and pleasure. I, for one, think that’s most considerate of these three young men in Psychic Rites and I thank them mightily.

All those times in life where you’ve joked ‘Oh, I guess I didn’t get the memo’? Not this time. Get the memo, get the Cult Memo.

[and get it here]