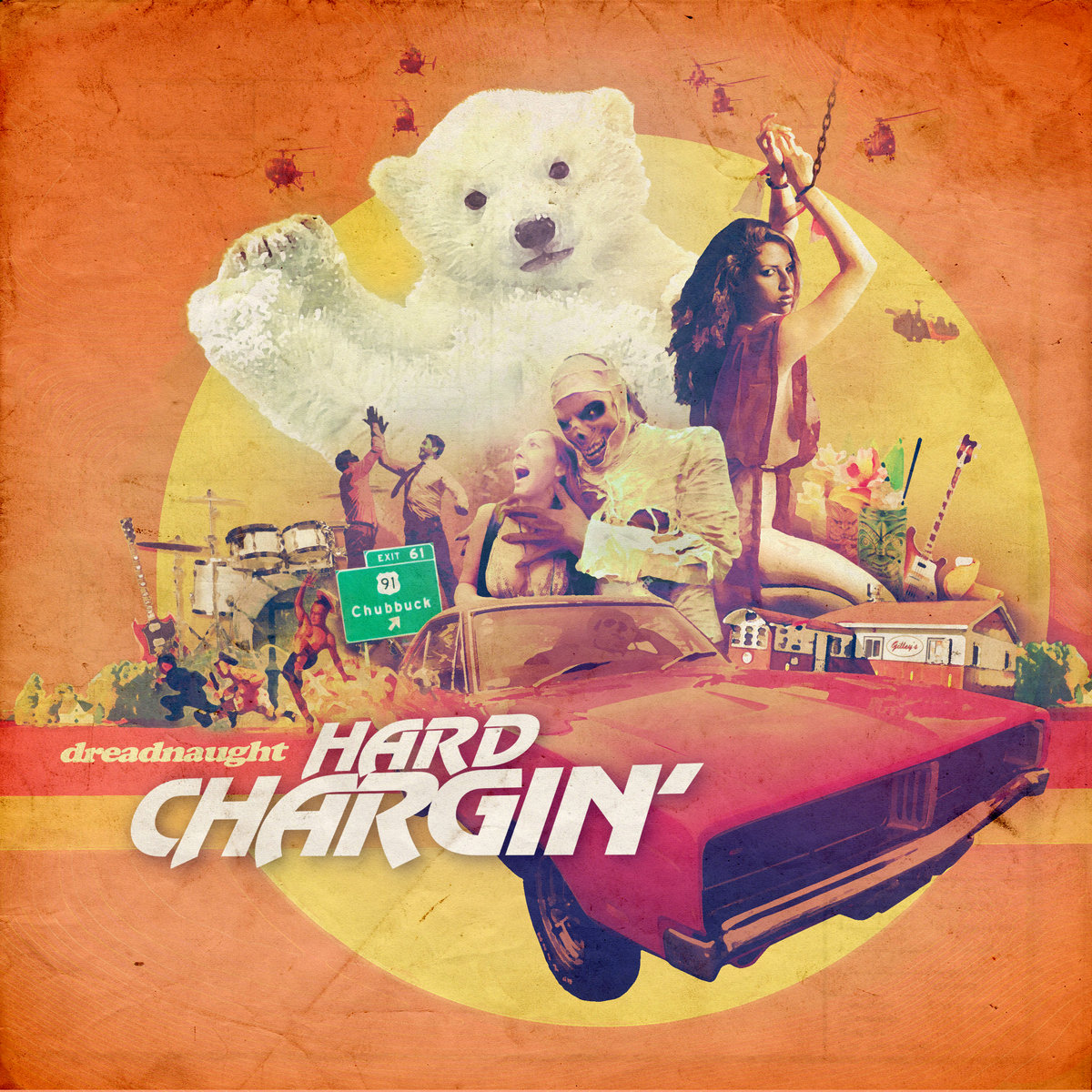 Next up in your correspondent’s desperate attempt to cover all the wonderful albums left languishing at the bottom of the editorial drawer as the past year sprinted to a close, we have the truly inimitable, effortlessly diverse talents of New Hampshire’s Dreadnaught to consider. Which is about time, really, as they’ve been avidly stirring the genre pot now for 20 years. Getting a chance to experience this album made me very grateful indeed that January was officially declared 2017’s thirteenth month. I get the sense of a lasting tradition coming on.

A purposefully – or anyway irresistibly – schizophrenic, three-headed juggernaut that wanders with a precisely calibrated glee across a wildly crumpled rock’n’roll map, Portsmouth NH’s Dreadnaught are a tough nut to descriptively crack, as this tortured opening sentence makes plain. Feeble though it’s perhaps been, I take solace in the fact that a similar failure has likely greeted every effort made prior to the one being presently attempted in the too few lines found here. It may be a woeful stab but it’s the only one I’ve got and besides, even John Updike, America’s legendary ‘Proust of the Brahmin infidelity set,’ only managed to mutter the categorically inadequate “sound of terror” when encountering the force that is Dreadnaught, so I’m not exactly in shallow company. Thus, in my capacity as senior editor, it’s been decided to simply throw a slew of impressionistic wordage at each of the eleven tracks, let the chips fall then see if you’ve been made curious enough to pick them up and re-order them to your own specs, in accordance with your own design.

More distinctly than on previous albums, Hard Chargin”s tracklist sorts itself into three separate duration-related categories: your basic album-length tracks that, though rather wildly different in style, maintain the structural coherence expected from songs thus described; short placekeepers, only one of which (barely) cracks the 2-minute mark but regardless exhibit the dual qualities of seeming both throwaway and essential that guarantees their relevance; longform genre-busting mindblowers that veer with willful pluck over pointedly contrasting territories.

Of the three relatively standard album tracks, pick your standout from the Horace Greeley power pop of “Have A Drink With Dreadnaught” that kicks the record off in winning overdrive, the somewhat twangy chicken-scratch prog of “Gaudy Baubles” – think Yes in a Dubuque, Iowa battle-of-the-bands, as off the charts as it is get-down-funky (in the shreddin’est of ways, of course), or “Slave Girls” as it sports prog-pop complexities that are essentially Rush having a twitchy dream about waking up in the bodies of the Brewis brothers and, oh yeah, dig the violin. So far as the feast of epics goes, the menu boasts “Express Delight” with its Sunn O)))-worthy noise experimentalism phasing seamlessly if suddenly into a light and lively jazz flow with brontosauran bass, the milder taste of “Takin’ A Ride With the Fat Man (Fatta Fatta Puck Puck)” that offers some Black Oak Foghat Arkansas boogie on a sunny, buzzed afternoon tip that, despite a Zappa-crazed mid-course detour, refuses to lose the groove over its its eight-and-a-half minutes, and “Mummies of Cobbosseecontee,” a sort of Weather Reported rocker hoedown affair that in typical Dreadnaught fashion doesn’t bother splitting hairs between the delicate and the muscular, mixing the two as if they’re twin brothers of the same mutha.

Most fun, though, might be those five palate cleansers, whether it’s “Bo-Leg-Ba” that drops Steely Dan, Tom Waits, and 10cc into a blender and pushes ‘pulse,’ the 2 AM saxophone jazz blow off the Brooklyn Bridge that is “Gets the Grease,” its piano chords falling into the East River, drum accompaniment rising into the cool night air, or the trio of variations called “That’s the Way That You Do It” – “(My Way)”‘s, um, chargin’ math metal as prosecuted by a lightning-struck Pat Metheny, “(Your Way),” an ersatz country warbler one could imagine Richard Manuel breaking into for laughs during the recording of Moondog Matinee, and “(Our Way),” a racing chugger that suggests both the pimped cherry Dodge ride on the front cover and that these Dreadnaughters, with all kinds of variable energy to burn, will be back before we know it. In the meantime, order it up here, and scarf it down.