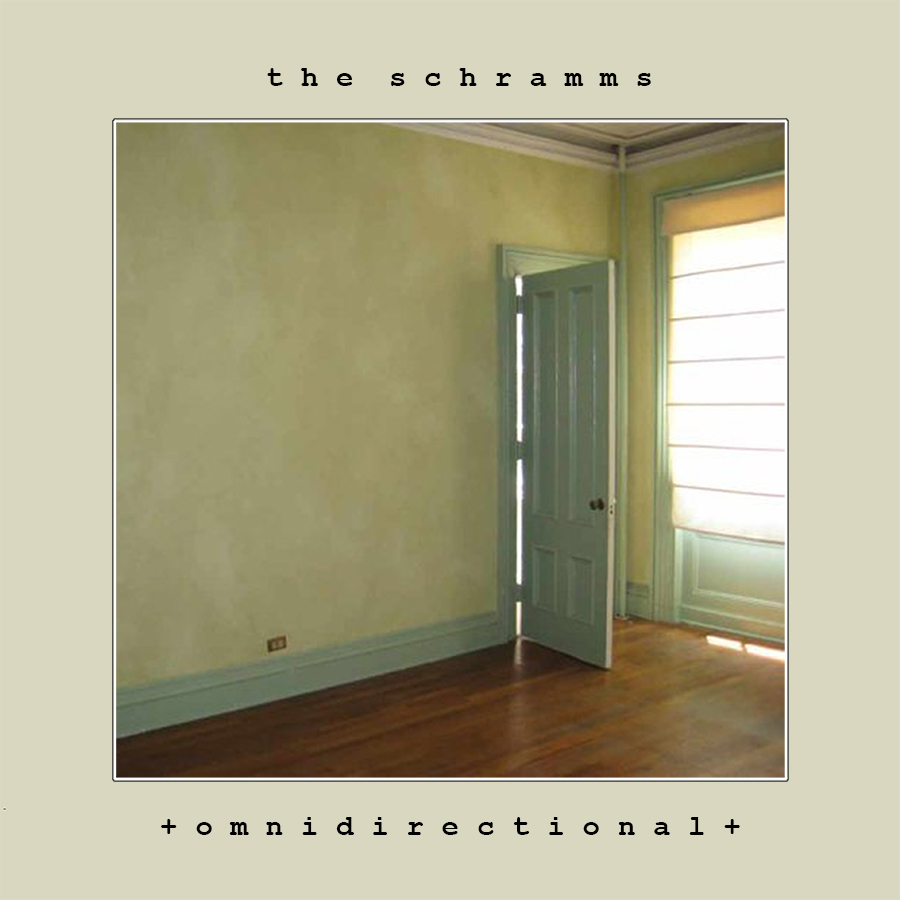 When you own a resumé full of bona fides such as feature on that with the header “Dave Schramm,” there are, among a certain cognescenti (those, for instance, that hew toward rich, naturalistic, warmly intelligent American songcraft), certain expections. Faced with this, some artists, despite said legacy, despite even their sincerest, most fervent intentions, fall rather sadly on their famous faces. Mr Schramm, it should be noted, here resurrecting his eponymous enterprise last heard from in recorded form in 2000, is not one of them.

Not a brash return – ‘brash’ was never their thing – it is no less saturated with self-assurance and a kind of calm elan. Beyond the almost unfairly built-in advantage of having Schramm’s songwriting as the base component, Omnidirectional benefits, as this project’s albums generally have, from an enviable trifecta of central elements: a stellar core unit – drummer Ron Metz (drafted in from Schramm’s final-days tenure in Human Switchboard some 30+ years ago), bassist Al Geller with Schramm handling guitars keys and various etc’s – stellar production (JD Foster in this case), and a stellar guest list that here includes James McNew, Marika Hughes, and Don Piper among others. And while it’s maybe a wonder, then, that they’re not big stars, it’s still the case that with that infrastructure in place not much can go wrong and indeed the pieces fall together on this ‘comeback’ effort with an unforced grace.

While a detectable glimmer of the band namesake’s formative contributions to Yo La Tengo’s unique palette shines just beneath the surface in a number of places – not least, as an example, the manner in which the free jazz-like squall of guest Doug Wieselman’s bass clarinet gives way to an eloquently lovely piano melody on opener “Honestly Now” – the fact is that should the listener wish to find them, glimpses of each of the Schramms’ entire four decades of work, collaborative and otherwise, could be cataloged in loving trainspotter fashion throughout this album. All the more remarkable, then, that the end result, ten years in the making, sounds so, well, Schramms-like. It’s as if the very essence of that loosely aligned community of songwriters and musicians – YLT Replacements Holsapple Stamey Buckner Pirner Freedy Whiskeytown and on down the line (Beat Rodeo Stampfel Tall Lonesome Pines) – has been alchemically distilled into this one trio that, upon reappraisal, might well be considered that whole group’s quintessence. A wobbly premise on the face of it, maybe, but the songs on Omnidirectional would seem to bear it out.

“Spent” rings with a sorrowful, piano ballad jangle that, unexpectedly perhaps, recalls Elvis Costello’s withering introspection circa, say, Blood and Chocolate, when Declan himself was aching in a particularly American way, “In Error,” like a gently cracked confessional, has about it a guarded desert blues feel, rough but fragile, while “Not Calling,” subtly laden with emphatic strings and Wieselman’s sad cabaret clarinet touches, distinguishes itself as one of the album’s most honestly emotional tracks, Schramm sounding at the end of his tether but accepting it with a shrug of some very human shoulders.

Pointedly, on tracks such as the boisterous, driven “The Day When,” un-shy of electric guitar and dig that Hammond, and “Hearts and Diamonds,” as lacerating as it is loving, a contrast reflected in its (not too) loud/soft dynamic, a hint of a beautifully unsettled Chilton obtains, as if that above-referenced, vital community of musicians and the sound that defines them – suitably ragged at the edges, pop devotional at its core – was born on that cusp of Big Star’s fade and the onset of the mercurial solo career that followed.

Though that might well be read as the blitherings of a loose-screwed music writer (who, to be clear, has no problem with that), it remains inarguably true that whatever the stylistic provenance animating the Schramms and their ilk, Omnidirectional is as fine an example of ‘it’ as has been released in some years.

[released June 21st, Omnidirectional is available on all formats here]