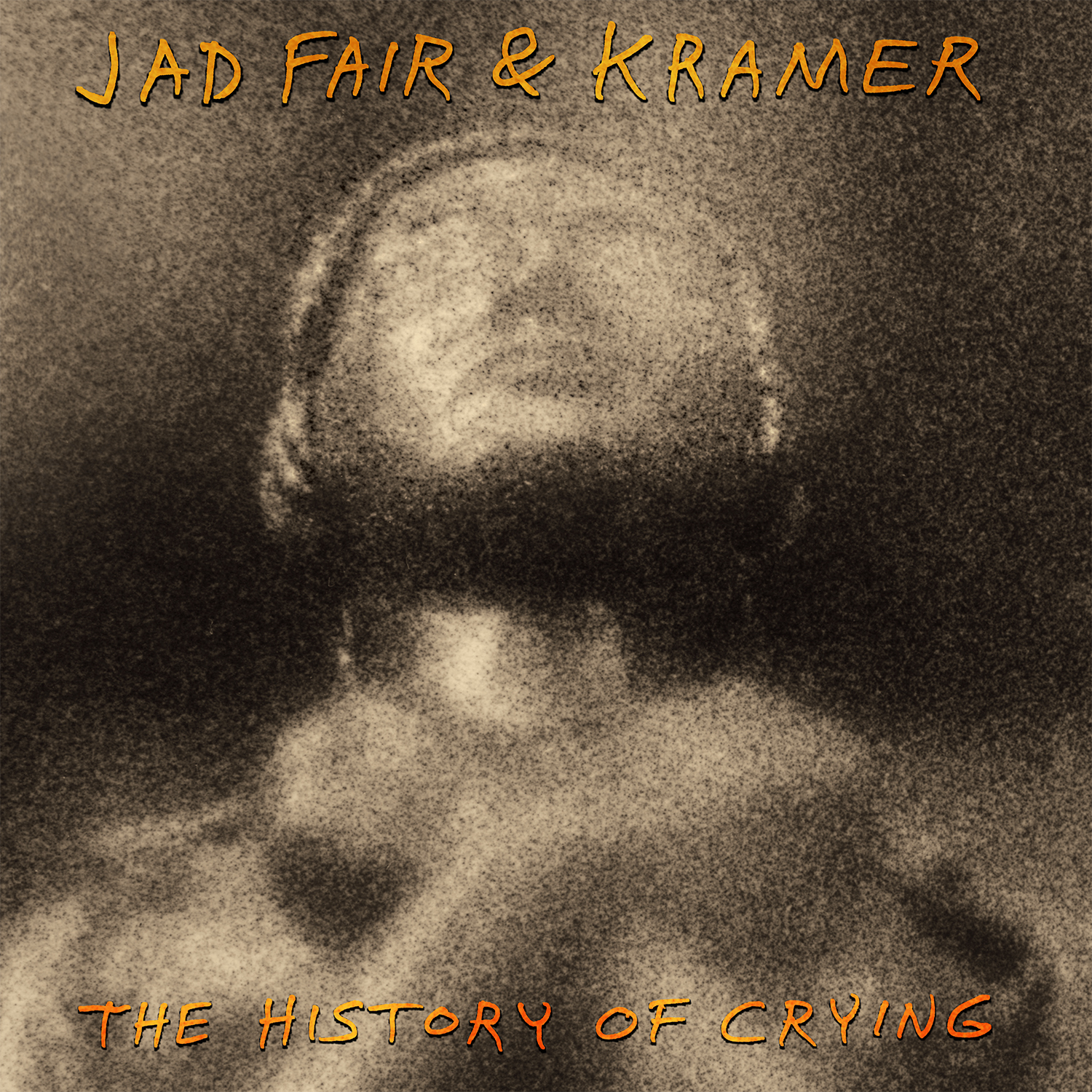 A somewhat curious pair that fate in its meticulous randomness made double certain to bring together some thirty years ago, the meeting up of Jad Fair with Kramer was, and is, a match made in several heavens. The heaven, for instance, where soundtrack composers, in terms of pop, didn’t give way to mere compilers putting together kneejerk and largely irrelevant compilations but instead adopted pop as the thatch-headed kid critical to their filmic parameters as they fit themselves a bit awkwardly inside the culture at large. The heaven where sweet romantic pop, marked by an asterisk denoting eternal vulnerability, is given sufficient rock-critic consideration to place it with the greats rather than leave it floating in ether outside the gates. Where the purist ideal isn’t “three chords and the truth” but instead the far more believable “a few unfussy, (often minor) chords and a rambling but fierce determination to get to the bottom of this life’n’love business.” Fantasies every one of them and yet, both incredibly and predictably given the caliber of character involved. The History of Crying invokes those dreams with what feels like little, or at least naturally occurring, effort.

Much of that, or anyway half, has to be attributed to the sound-shepherding instincts of the mononymous Kramer. A man whose name could singularly be used to define the spirit of actual independent music, Kramer’s experience and body of work has arced across the so-called American underground era like that of a largely involuntary chronicler, a reluctant exemplar carrying the banner of indie self-reliance that very few, despite talk-is-cheap statements otherwise, have had the strength to hoist. It’s a career (should it be called that; more a mission organically built year upon year since the early 80’s) marked by razor-sharp intelligence and a decided weakness for the more unconventionally talented artists lurking on the left-field fringes of the quote-unquote alternative scene. It is, however, a weakness born out of strength, born out of a certain rare type of integrity that doesn’t brook a lot of compromise and hence has suffered the market’s grim consequences, the effects of which have at times been materially damaging but have never come remotely close to sowing doubt regarding the original choice of path.

Thus has that path, wending with a circuitous certainty, led the Shimmy Disc founder from Daevid Allen’s NY Gong to the Chadbournes (from whence now longtime foil John Zorn) through the virtual discovery of the Butthole Surfers and the outright discovery of Low and has included not only stints leading his own mercurial bands such as Bongwater but as well production duties that have spanned a dizzying spectrum from GWAR to extraordinary singer-songwriter Emily Rodgers and countless variations in between. Taking the long view, though, none seem as unerringly preordained as this partnership with Jad Fair.

Since emerging as essentially half of Half Japanese (with brother David) in the fertile punk-shocked afterbirth of the late 70’s – debut triple album 1/2 Gentlemen/Not Beasts arrived on vinyl in 1980 after a cassette-only the previous year – Jad Fair has been an irrepressible, wholly individual musical force built out of an earnest natal talent and some powerfully nerdish charm. A bit of an enigma wrapped in a [number of] paradox[es] wrapped in something of a lovable bewilderment, the material he creates, for those few uninitiates out there, can remind of Jonathan Richman had the Boston Bard been weaned on a strict diet of Coney Island Baby-era Lou Reed and an abundance of those late 50’s/early 60’s Brill Building tearjerkers with all their exaggerated teenage mix of optimism and tragedy (the emotions of which Reed himself, of course, ached with in his lonely pre-VU years). Far from a formula, not too far from a driving compulsion, it’s a stylistic consistency that, like any enduring artist, reflects the internal creative engines powering the gist of Fair’s work no matter what direction his unique guidance system takes him, be it noise or spoken word deviations in the audio realm or his work with both color and monotone cut-outs in the visual. While an elite number of others, both in his cohort and before, have been able to sustain themselves as artists for forty years or more, scarce few have pursued the idea of turning one’s life into a work of art with such dogged, devotional (yet ever-so-personable) zeal, and that spirit, with all its humbled grace and innate surety, animates this album in a soft yet unyielding glow of deathless oddity and a shambling, inextinguishable groove.

Beyond any and all of that, though, something seems to just come together here, there’s a casually ineffable quality to The History of Crying that makes it, above all else, a confident record. Which is a good thing indeed if you’re going to open your record quoting, unsubtly and off-the-cuff, the Beatles’ “It’s All Too Much.”

That song, “Red Red Sun” (itself not to be confused – heaven forfend – with the INXS track), is a daydreamy slice of simple summery enchantment that glides through its three minutes forty-three seconds as if levitating an inch above the hazy ground, disarmingly unabashed and completely smirk-free as few if any other artists can pull off. But here’s the thing. Even on those songs – including on this album the giddy fantasy tromp “I Wanna Make A Movie,” Fair’s double-tracked vocals backed by soundtracked string effects and intermittent synth bloops, and the heart-baring balladry of “I’ll Give You the Moon,” all waltzy organ and semi-gothic innuendo – where one’s surface impression might yield on first glance a wide-eyed, child-like romanticism that borders on naiveté (to be fair a Jad Fair trademark), there’s nearly always an overlayering going on, the sentiment expressed being exactly as it seems while simultaneously veiling a murmuring undercurrent of wounded human yearning. That said, the bulk of The History of Crying‘s remaining cuts are a little less in need of deeper looks, embroidered as they are on the songwriter’s gangly sleeve.

Utilizing as well as anyone the stripped-bare poetry of pop’s golden psalmbook, songs like the impassioned and jarring “I Won’t Eat til You Come Back to Me,” “Show Me the Way to Nowhere”‘s deft welding of an inveterate optimism to the constant presence of its exact opposite, and the stark but generous, slow soul of the title track, organ-drenched and unspooling like a gentle catharsis of heartbreak and acceptance, the lyrics’ intentions are marked more or less by a finely-crafted lack of ambiguity. Yet – and here’s the magic part – those songs are effuse with ingenuity.

To those familiar, that’s not particularly a surprise, of course – pairing Fair’s sadsack buoyancy with the subtle wizardry of Kramer’s empathic backing and production makes all this a given – but still, the level of quality here rather startles, perhaps all the more so since the tone throughout is pervasively understated. Highlights don’t so much abound on The History of Crying as sneak in and take over. If you’re not marveling to the inherent gladness of “All I Need is a Kiss,” enamoured by the sly noirish pluck of “You Cripple Me” or made to smile into your morning coffee at “Pickpockets of Love,” beaming with appreciation at its brand of garage-rock Spectorism, then I’m sorry to inform you that you’re dead to the pop world.

While in no way a Jad Fair connoisseur – few could be, after all; his vast and varied discography, solo and otherwise, stretches to well over a hundred titles – and thus unable to say with any authority that this ranks as his finest work, I will say with utter confidence that The History of Crying is among this year’s most riveting and resilient releases. We’re lucky indeed to be living in a time when work like this is being produced, and lord knows anything that makes us feel fortunate to be around in 2017 is a blessing. To Jad and Mr Kramer, therefore, I say ‘Thank you.’ [exceptionally limited vinyl copies of The History of Crying available here. We suggest you don’t hesitate]