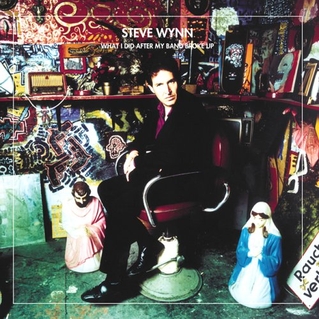 Last night (October 9, 2014) at Shank Hall in Milwaukee, Steve Wynn demonstrated yet again why he’s one of the best songwriters of his generation. As anyone who’s taken the time to listen to Wynn’s Dream Syndicate, Baseball Project, and solo records knows, his lyrics, vocal melodies, and guitar playing are the stuff of poetry.

Like Dylan, Springsteen, and Reed, Steve is a rock ‘n’ roll poet, who can make you cry with his heartfelt introspective confessions, laugh at his witty observations, and groove to his guitar’s howl.

But last night at Shank was a first for Wynn. For the first time in his 30-year career as a musician, he took the stage by himself, with just an electric guitar, harmonica, his voice, and his infectiously good humor.

As Wynn blasted through his songs, he gave the Shank crowd a vision of the skill, innovation, and versatility that defines his guitar playing. Set opener “The Days of Wine and Roses” took the crowd back to Elvis-style rockabilly by way of Velvet Underground noise, whereas “See That My Grave Is Kept Clean” was a menacing blues and “Boston” seemed somehow more of an introspective anthem than it does on Out of the Grey.

Wynn’s harmonica took center stage on one of his greatest songs, “Tell Me When It’s Over.” His performance of this song as – in his own words – a “Woody Guthrie or Pete Seeger” folk song reconfigured it, emphasizing its lyrics as a revelation of helplessness in the face of loss. The songs on Dylan’s Blood on the Tracks came to mind.

Wit, on the other hand, dominated two Baseball Project songs that – Wynn joked – told stories that just happened to take place in Milwaukee. On “Harvey Haddix,” Wynn was the perfect storyteller, telling the tale of how Pirates’ pitcher Harvey Haddix lost a perfect game in extra innings in a game against the Milwaukee Braves in 1956. “Larry Yount” continued in this vein, as Wynn related another sad story about the only player in baseball history who appears in the record books without ever actually playing a game. Yount got hurt during his warm-up pitches shortly after taking the field for the Houston Astros – and his brother just happens to be Milwaukee Brewer Hall of Famer, Robin Yount. What a double-edged sword!

“When You Smile” and “Whatever You Please” put the focus on Wynn’s sheer ability as a poet. Utterly romantic and sublime in their melodies, these two songs were the most emotionally moving of the night. In particular, “Whatever You Please” sounded better than the original version, mainly because Wynn’s guitar was at the fore and not the piano that appears on the Ghost Stories version.

Please do yourself a favor and catch Wynn on this tour. You’ll witness musical diversity and dexterity, guitar mastery, and some of the best songs you’ll ever hear in new and exciting reconfigurations.