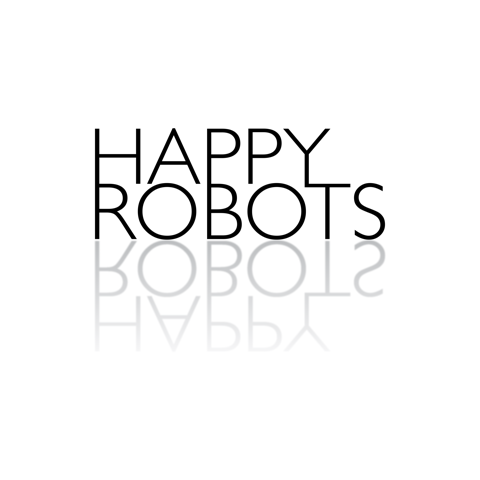 “Music for robots to dance to, distributed by a tiny British label that aims to take optimistic, electronic songs to the masses” –The Guardian

We formed Happy Robots Records back in 2008. I originally ran it along with my band-mate Alice Hubley. Our band Arthur & Martha had recorded our debut album ‘Navigation’ and after months of getting mucked about by labels we decided to just start our own instead. We thought it would be easy – ha! We named it Happy Robots after a club night I ran while I was in the band Saloon. It had always been an ambition to run a label anyway and after making a few calls we had an agent, a distributor and were ready to go.

Unfortunately due to a bunch of personal reasons, Arthur and Martha drifted apart just after our album came out. Unsurprisingly we lost a lot of money too, so we mothballed the label. But in 2015 I had somehow managed to record a solo album called ‘Age of Anxiety’ under the moniker Rodney Cromwell. It was a bit rough-and-ready but my friends liked it, so I decided to just stick it out and see what happens. Before I knew it I was playing gigs again, getting played on the radio and I had people sending me their music wanting to get on the label. There was no great plan, it was all just a series of happy accidents.

Other Labels As Inspiration:

I always loved everything to do with Factory Records. Although they made a lot of terrible decisions and over-stretched themselves, I loved their ambition; they were as much a lifestyle choice as a record label. Unlike them I try hard as hard not to put out records that lose money with every unit sold (although sometimes I’m not far off.) The only aspect of Factory I have really emulated is a geeky obsession with catalogue numbers.

The label that inspired me most was Bearos Records which was based in Birmingham in the nineties and noughies. Saloon put out one record with Bearos called ‘Electron’ and it was the easiest most effortless release we ever did. We just posted a minidisc with the artwork and before we knew it, the record was released and almost immediately sold out. Alan the label manager is a very cool guy; we stayed at his house a lot and spent several nights absolutely battered on his homebrewed absinthe.

No, we definitively don’t have a motto. If I had any guiding principles they would probably be something like “have a good time, all the time” or “it’s such a fine line between stupid and clever”.Ad

Advantages/Disadvantages of Owning A Record Label:

The main advantage is the ease of data sharing and the fact that you can work anywhere; I do most of my work on train to and from work. It’s also pretty easy working with bands from overseas, although I do get woken up at night when the US acts message me on Facebook.

The disadvantages – well where do I start. Fundamentally, the music business is broken at all levels. No one knows what the right or wrong way to even just make back your investment – even things as basic as best format to release onto whether it’s CD, vinyl, digital download, no-one knows the best answer. Everyone seems to just be making it up as they go along. I mean most our stuff is digital-only but the market for downloads has collapsed in the last 18 months so you have to start thinking of other approaches. Taking more risks.

In the UK, fucking pointless things like Brexit have made it more difficult too – the collapse in the pound and financial uncertainly means people are just less likely to part with their cash and costs have gone up. Putting out records is a massive gamble. I really hope I can get some sort of break, but at the moment the label really is just a very cool, very expensive hobby.

Finding the time to do everything that needs to be done. One of the things that really eats time is that you can’t just have a website anymore, you need to be on Soundcloud, Bandcamp, Twitter, Facebook, YouTube, Spotify etc etc. It’s a full time job just remembering the passwords.

Sustaining consistent quality. I don’t put out much and I am fussy about what I release. It really makes me happy that there are a group of people that buy pretty much everything as soon as it comes out which is great. Some of those people bought stuff during the 2008-2010 iteration of the label too and some were even fans of Saloon, so I suppose the greatest achievement is having kept their loyalty. It makes it all worthwhile.

How To Stand Out As A Label:

In terms of standing out, I just try and make sure the records and the label website looks good. I could probably do more in terms of exciting social media content but I find a lot of people’s social media marketing a bit desperate to be honest.

I use a great distributer in Cargo Records. I am a bit of a snob in that I don’t believe a label without digital and retail distribution is a real record label. If you don’t have distribution you might as well be selling your stuff at a boot fair. In terms of promotion I try and get all my artists to use a PR agent, we use Shameless Promotion PR from Canada a lot. I have tried doing the promotion myself but it always ends in tears (usually mine).

I have just put out an album by a great band from Ireland called Tiny Magnetic Pets. They play poppy krautrock– I described them as sounding somewhere between Kylie and Kluster. In fact ex-Kraftwerk member Wolfgang Flür is on the album which of course is very cool. It is the first Happy Robots release on 12” vinyl so I hope it sells. They are touring with OMD in the autumn too which is going to keep me busy.

I hope to work again with Hologram Teen, she has a new album out soon (on another label) but we’re already talking about her album after that. There will be something from my act Rodney Cromwell next year too – at this stage whether it’s a 7” single or an EP is in the lap of the gods

As for long term plans, God knows – keep on pushing on until we go bust again probably. I am always the optimist.

Three Releases That Define The Label:

Well what a difficult question. I’m going to assume that these people already own all our full- length albums.

Our first release, Arthur & Martha’s ‘Autovia’ is still really special to me. It’s retro but forward looking, a musical representation of the label mission statement I suppose. We still play it in the Rodney Cromwell live set. And its about to be re-released on a CD alongside the aforementioned OMD and Section 25 and Vince Clarke and load of other synthpop household names, which is crazy for a song I partially recorded in our downstairs toilet.

And it was really great to put out the Hologram Teen single ‘Marsangst’ last year. Hologram Teen is Morgane Lhote who I used to watch when she was uber-cool synth player in Stereolab. Back in the hot summer of 2003 I was lucky enough to work on the album ‘Lets Get Static’ by her then band The Projects and we stuck up a good friendship – I seem to remember selling a Moog Opus 3 for her. Morgane moved to NYC and then LA but we stayed friends over the interweb and I was chuffed when she asked if I wanted to put out a single on the label. It’s a really fun record and on lovely pink vinyl.

I also have to choose Pattern Language from Boulder Colorado and the brilliant ‘Total Squaresville’ mini-album. It’s a collection of gorgeous retro synth-wavy instrumentals that I absolutely love. You can’t actually buy it in the shop because it’s all sold out, but it’s available on iTunes and all those places. Putting out music that you love is what it’s all about, and I am loving being able to help other artists get even a tiny amount of the recognition they deserve

Where To Find The Label:

Our website is at www.happyrobots.co.uk and on Facebook we are at www.facebook.com/happyrobotsrecords. Our Twitter was recently rescued from Russian SpamBots and it’s at @happyrobotsrecs. And finally our You Tube has a really horrible URL because we still need to get enough follows, so give us a follow on there if you can. It is at https://www.youtube.com/channel/UC_ZvCbaApGUVuQA7m7jaJtg

Thanks to your support for our artists. It has been much appreciated.