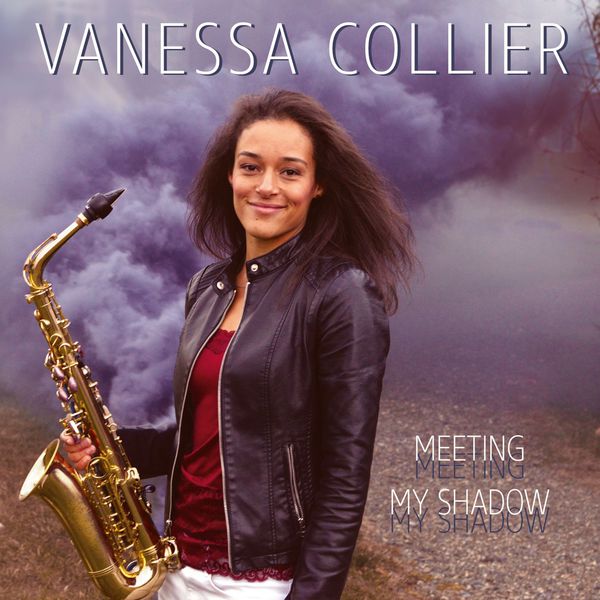 Toward the end of her second album Meeting My Shadow, Maryland-born singer, songwriter, and saxophonist extraordinaire Vanessa Collier takes a rip at Sister Rosetta Tharpe’s lively gospel-blues burner “Up Above My Head, I Hear Music in the Air.” After dropping the first solo into the dexterous hands of Laura Chavez, who tears it up in a fiery, precise, no-uncertain-terms way, Ms Collier steps up on tenor and proceeds to play what could actually be considered the second best guitar solo on the album, chasing the heels of the one that’s preceded it. Now, this isn’t said to simply tout the woman’s chops here, though it’s a fine example, but rather to point to her natural, nuanced, empathic way with a tune – she seems to know innately what a song needs even when it’s not hers (which eight of the eleven here are) – and to suggest it’s no accident that she chose that particular gem from Sister Rosetta, as this record leaves little doubt that Vanessa Collier, too, hears plentiful musics raining down on her from above.

Soaked in blues, funk, and a solid helping of southern soul, Meeting My Shadow has that rapturous banquet quality on which Atco, Atlantic, Stax etc LPs of the 60’s and 70’s once regularly invited us to gorge. Treated to opener “Poisoned the Well”‘s swampy wah-wah groove that evokes backwoods Georgian heat where some bad juju’s been goin’ down (and where an eerie nightbird flute that happens to be the first instrument we hear Ms Collier play brings a shiver of mystery), we then wend our way through thumping, Aretha-touched, (f)empowered soul – “Dig A Little Deeper” with its Memphis Horns tightness – a sweaty bar band romper – “Two Parts Sugar, One Part Lime” that pits a little Junior Wells against a little Little Richard and comes out shakin’ like a mutha (not to put too fine a point on it) – a straight-up 12-bar Texas blues shuffle a la ‘Further On Up the Road’ – the frankly startling “Whiskey and Women” which finds Collier’s (again) guitar-replacing sax solo strut its tone from proud to sultry to defiantly free over a head-spinning minute-and-a-half span – and NOLA-flavored jump’n’swingin’ sass – “Meet Me Where I’m At,” Charles Hodges’ lively ivories and Marc Franklin’s punchy brass work ensuring the track’s full complement of street corner jive. But while that multi-disciplined agility indeed impresses, it’s when Ms Collier dips into heartbreak blues that the depths of her commitment and artistry threaten to leave one breathless.

The midnight crossroads vibe of “When It Don’t Come Easy” with its Bonnie Raitt bona fides, trench-deep groove and Collier on shuitar, the slow pining blues of “You’re Gonna Make Me Cry,” gospel-like in its bemoanings of love, the confessional, baleful, and downright beautiful catharsis of closer “Devil’s on the Downslide,” Franklin’s trumpet and flugelhorn (arranged by Collier) bringing Garth Hudson-level poignancy to the proceedings, all ring strong and true as any testament can, the singer’s voice, confident and powerfully expressive throughout, sounding designed and god-given to represent the fragile lives we all needs find the strength somehow to uphold. In those moments of blues apotheosis, it’s that instrument as much as the sax or any of the others Vanessa Collier contributes across Meeting My Shadow that reaffirms in the purest terms the healing power of music. An astounding surprise of a record, at least for the uninitiated such as the writer was until a few hours ago. Seek it out. [Meeting My Shadow available here]