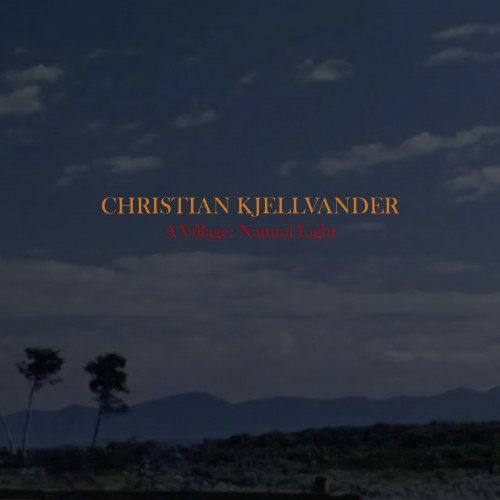 Let’s quickly dispense with the details, those hobgoblins of formality, so we can spend our love and energy on the brittle, sublimely elegiac music that’s gently capsizing my heart as I begin this review. Christian Kjellvander, though Sweden-born, grew up in Seattle. At some point in the 90’s, due to the lure of a siren’s bidding or for more prosaic reasons, he returned to his natal home where in fairly short order he formed Loosegoats, an Americana band in a far-off land that, with no small thanks to the honeyed voice at its core, became Sweden’s answer to Uncle Tupelo only much more successful. When that band splintered at the turn of the century, Kjellvander formed a band called Song of the Soil with older brother Gustav, a partnership cut tragically short by the latter’s passing in 2011. In the wake of the of that unthinkable the Loosegoats were reborn and, most saliently for our purposes here, a string of solo albums that had begun in 2002 continued to materialize, of which A Village: Natural Light – released Oct. 14th on Tapete – is the sixth. And while that title, relative to record’s contents, makes great contextual sense, the fact is, compared to the luminously wounded nature of the works it’s meant to represent, it rather pales in its plainness. That, notably and by some margin, is as close as we can come to registering complaint. The rest, the gist, leaves us breathless, as if we’ve spent a dusky afternoon chasing after some chimera of the ecstatic, hoping we catch it before darkness falls.

The nine narratives on A Village: Natural Light, evocative and direct, shaded at times toward the allegorical, have the visceral intensity of Cormac McCarthy minus the violence. The tension here isn’t apocalyptic, it’s emotional, but regardless just as unsparing. The hurt, the heartbreak, the despite-it-all faith and belief frayed at the edges, all that’s here but comes expressed inside what we’re choosing to call sharply-drawn shrouds, a turn of phrase that points to the conundrum at the heart of things and c’mon, let’s face it, there’s always a conundrum at the heart of things. As for the music, the exact nature of what you can expect to hear, yeah, let’s get to that.

You might well hear fleeting wisps of Tweedy’s from work from Wilco onward if only in the willingness to engage in both a bit of subversive embroidery when it comes to the Americana template – unexpected fillips of guitar emphasis here, Bon Iver-ish background vocals there – as well a certain confessional fearlessness. You’ll probably hear Palace Music intoning with a game – perhaps foolish – resilience against the isolating dark of the black night. You’ll definitely hear Bill Callahan – a Kjellvander lodestar it would seem – moaning in defiance of a silence that is almost certainly crushing (not least on the excruciatingly lovely “Riders in the Rain”). On “Midsummer (Red Dance)” you might hear Richard Thompson crossing the modern American plains – located now in Scandanavia, apparently – as he releases a lifetime of shadows off his shoulders with a delicately cathartic shrug. At times, such as on “Misanthrope River,” you might even hear eddies and whorls of Jim White at the wryest grimmest ends of his rope, while at others – “Always With the Horses,” say, or “Gallow” – Sam Beam reaching the peak of his fragile melancholy, finally inhabiting the poet’s bones of Leonard Cohen’s still-living ghost. And inevitably, as this album’s intimate threads continue their unraveling, you just might sense, on “God’s Child,” a speechless Nick Cave breathing in the spaces between, standing in the wings soaking it in as Kjellvander takes him telepathically into his confidence.

Now, just as surely as all these glancing comparisons are but proximal brushstrokes of what is in every unmistakable sense, from its marrow to the aurae of vulnerability raditating at its edges, a Christian Kjellvander record,  A Village: Natural Light is also not one long whinge of existential misery. Kjellvander is no gloom merchant but rather a high-functioning, keenly attuned realist and as such, in the midst of the work’s (very) stark beauty and a fearless, not-always-joyous honesty of heart, hope does in places – “Dark Ain’t That Dark”‘s insistence that it’s having love by one’s side that allows that song title’s assertion, or “Midsummer”‘s relative buoyancy – find the strength to spiral upward like little sudden dust devils spinning up off the desert floor.

In the end what you’re left with, after AV:NL has made a puddle of your resistance, is a long menu of rapturous, bewitching paradoxes, as happens with most every album that comes hurtling at you out of nowhere and knocks you sideways, no matter how quietly. Phrases form to help you make sense of it, phrases that themselves would be of improbable logical value except as they’re applied to albums like this: spectral sparsity; skeletal exuberance; expansively claustrophobic; iridescently somber. Every one of these and no doubt more lie outside the bounds of meaning until a work like this arrives to sort them into a natural order. It’s almost alchemical and we can’t believe how good this is.