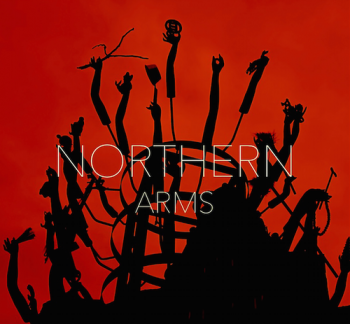 I am not a religious man and, in fact, self-describe as a devout atheist. With that in mind I am perhaps not your most credible authority but regardless I have to tell you – the rapture is upon us. What’s surprising, beyond those five words spilling from my pen, is that the source of this sudden exaltation isn’t some dusty village half forgotten on the edge of the Levant but rather the rocking cradle of American liberty, Philadelphia, from whence Northern Arms, a band whose debut album, self-titled and released last Tuesday on BITBY, indeed embodies, in spirit and mind, the hidden emotional America that’s in plain sight every day of our lives, that living invisible breath of existence that informs our sense of ourselves.

That sense comes not from the standard menu of icons from which we’re normally asked to draw our national identity, it’s nothing to do with politics or pride or the palace of celebrity but rather the humble and virtually unspoken. Where Northern Arms resides is in the territories in between, where innuendo tugs at our fallibilities, where hearts yearn in lonely agency, left to advocate for themselves in the face of mundanity’s crushing routine. This album seeks beauty in order to wallow in it, to express its sorrow and bitter-fought triumphs in an aural landscape that readily seethes in a kind of lost verdant dream, where the moss overgrows, the pines absorb your cries, and ghosts live like hermits in shacks made out of abandoned time. In this place the land has a long memory and much is unfathomable, which stops no one from trying to fathom it, grasping at salvation and meaning like punch drunk fighters who haven’t the strength to raise their arms. In a sense wounded by the very fact of its own mortality, the spirit of this record is also lifted by an almost apocalyptic grace.

It’s not just there in the words – though it is there, unfailingly – but in the dynamics and elegance of the arrangements, the vast compacted terrains of instrumentation (Northern Arms is a 10-strong band) backdropping these impressionistic portraits of redemption sought, redemption lost, of hope in the face of gale force winds seemingly arrayed against the narrators at every turn. And yet redemption does somehow find its way to the surface, a miracle if a tattered and exhausted one, covered in scars and whatever layers of detritus still clinging to it from the complicated depths but no less glorious for all that. Here, listen, and please pardon my exuberance if you must, but this is no time to temper response nor stem enthusiasms. We don’t get records like this very often, never mind debuts.

In simpler shorthand one might describe Northern Arms as the Band in the scriptural grips of a Southern Gothic fever, hallucinatory, visionary, take your pick, its never easy to tell those two apart anyway and both twins are at play here. There is also, in at least a couple of the songs’ sound, something of a dry arroyo glare, an effusive air of the high Mojavean desert that I’ve caught first-impression glances of since first hearing demos last summer. It may just be the aloneness that inhabits many of Northern Arms‘ voices but there’s some sort of epic, haunting wind in one’s ears while listening to tracks such as “Build My Gallows High” and, especially, “Ninety And Nine” where the sonic palette seems to lure one out to those places where the solitude is so vast it’s revelatory, where the endlessness of dusk inflicts an awful sense of God however unknowable. This may seem somewhat paradoxical given the band’s name and origins but the fact is, like the Band, Northern Arms’ brand of the ineffable covers the whole of the North American continent. There’s nowhere you can go to escape the spell. 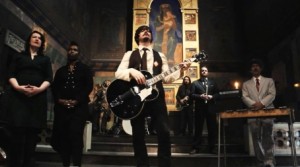 At this point I can understand your saying ‘Hey, get to the songs’ but I would argue that, at their working essence, wherein lies their crux and operating mojo, I already have. Every track on Northern Arms trawls the waters from which each word I’ve said has been drawn. But, to illustrate further, let’s start at the start, with the fierce pleading roar of “Warm Springs Georgia”‘s opening bars.

Counted off with a powering descent of a tom-tom that falls into a thunder-crash of brass and electric guitar and I’m sure the plaintive presence of an organ, the immediacy of this band’s number is brought instantly to bear. This is a wall of sound for the ages, and one of the many joys and wonders of this record is beholding the profound deftness with which they’ve managed to merge their many pieces into a contained and often simmering singular force. For ‘force’ is the watchword here, it’s what one gets when a grandness of vision submits to the common task. The power is in the beauty of distillation and that extraordinary process is on full display from the off as “Warm Springs Georgia” unspools through its spectral tale of a plane gone down in a place where – again – the land absorbs the legacies of sweat and tears that happen upon it and loss is inseparable from the dream of same. Words convey this, the throaty strum of a an acoustic conveys this, an entire phalanx of organic voices convey this whether they be human – Keith Richard Peirce’s lead vocal full of trembling conviction (a constant) or Heather Brann and PJ Brown’s wounded-angels-in-the-rafters supporting vox – or merely brought by human hand, Eric Bandel’s soughing, story-telling organ or the baritone sax’s all-too-earthly sermon (Michael Tramontana). As implied, there are too many elements to name. This is not a record that one may easily encapsulate. Multitudes flourish and effloresce and it’s here we raise hosannas to the three – Jeff Zeigler, Brian McTear, Mike Kennedy – responsible for Northern Arms‘ production. No small task with the more modest, standard four- or five-piece but the results here speak to the heroic, as the songs themselves hew to exactly that same adjective. Northern Arms is an object lesson in ambition realized, a fact made teasingly apparent by the earlier release of first single “What You’ve Got On,” sufficiently covered in these pages so no need to further expound except to say that, one, I’ve come to realize that that song has joined a personal pantheon of tracks that shall forever elicit the same level of passionate – some might say embarrassing – response in me whenever and wherever I hear it (that’s me the other day lip-synching it down the street past the bus stop, in other words, complete with Otis-level hand gestures), and, two, it’s a matter of splendid relief that the rest of the record measures up in grandiloquent, if never quite as obviously classic, fashion.

Whether it’s the soulful, resigned lament of “Below The Pines,” with Travis Weissman’s chill-inducing abandoned fairground guitar that echoes, in fact, a loving resemblance to “The Theme From The Last Waltz” but is nonetheless so sadly melodic as to bring us to our knees, or the dark, plangent “Let The Water Come Down,” reverberant with a beautiful, loitering menace, vibes (Kenneth Brune) delicately ringing through like a terrible brightness against heavy grey skies, or the heartbreakingly hopeful swirl of “Flesh of Arms,” from which the name of band and album and sung this time by PJ Brown in a full flush alto that comes to us as a voice in the midst of toil, nothing here lets us down but instead thrills consistently with its mindful accumulation of abundance.

Northern Arms treat these eight tracks prayerfully, not as sacred texts but as sacred objects. It’s the songs to which we owe devotions, this album says, the songs to which we, including the band, should bow with a dutiful respect. It’s a reverence of sorts and a deserved one, one that nurtures the likes of “Last Horse,” the penultimate track before “Flesh of Arms” and perhaps Northern Arms‘ most idiomatic, tinged with a vintage gospel-blues patina, humbly glorified with a harmonium in the wings and Peirce’s voice at its most quavering as it seeks spiritual solace in a setting of such musical empathy as to evoke the Staples in the prime of their eloquent American moment, souls stirred, hearts moved as close to joy as sorrow allows.

I have to admit to some apprehension way back there at the beginning when Stereo Embers’ friend and human antenna Sylvie Hill tipped us to this band. The promise was unmissable but one can never know and a year is a long time. To have the ultimate result surpass one’s most fervent expectations is what we all hope for but dare not. Northern Arms have delivered on their promise (I kept interrupting myself while writing this, exclaiming a hushed ‘It’s so beautiful!’ to an empty kitchen in my still-sleeping house, staving off shivers and failing), and now it’s our turn to take up the torch and spread the word. Buy Northern Arms and play it to your family and friends like the new rock’n’roll sacrament it is. We’ve likely got some tough times coming, and this is the type record that just might help see us through.

Or, buy it because it’s the best damn debut album you’ve heard in far too long and its grace will shower you with reward.