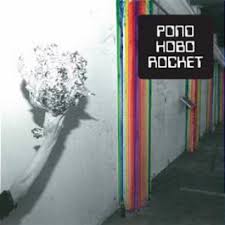 In March, 2012, due in no small part to the success of shared band members’ band Tame Impala having released a little stunner called Innerspeaker in 2010 to worldwide acclaim, Australian band Pond enjoyed their first taste of major label success (a relative term these days, but still) with Beard, Wives, Denim. An insouciantly relentless, driving and endlessly inventive bugger, Beard grabbed the irreverent psych mojo zeitgeist and wouldn’t let go. A raw but refined, magically tuneful romp that owed as much to a Beatley, Coynesque gift for melody as it did the sub-Plank peregrinations of their beloved Can, it came as a blast out of nowhere (though it was their third LP), bursting with mastery and cunning and it made many a critic’s year-end poll, including yours truly’s. A year and a half on we have their follow-up, Hobo Rocket, the words ‘much’ and ‘anticipated’ attached to it like a couple of hopped-up booster engines. Ultimately, it would appear, the band could have done without the extra weight. Lift-off turns out to be a slight bit problematic.

Clocking in a full twenty minutes shy of that previous breakthrough, Hobo Rocket begins on a promising, if baffling, groove. Perhaps you’d not find it somewhat unexpected that the band that had brought us such buoyant self-reliance last time around would launch this sequel on the classic bomp of a Bo Diddley beat, but it made this listener cock his head and go “Huh.” That they break into it and mess it up with a stock rip of a garage guitar is, of course, no surprise, but the ham-handed power chording with which they do it, far more Sabbath than Karoli, doesn’t exactly ring the chimes of confidence. The song, “Whatever Happened to The Million Head Collide,” does boast a divertingly pleasant, fragrant middle interlude (though again anchored to that indefatigable Bo beat), singer/guitarist Nick Allbrook stating “I want to go to sleep and not speak to anyone at all” in a candy-coated near-falsetto, but that edenic detour is quickly crushed by a full two-minute descent back into the sludgy maelstrom. Sure, there’s some nice far-out phasey guitar going on in there but heroic as it is it’s not enough to pull the track out of the mire. And by the way, unless the spine says ‘Buzzcocks,’ always beware single-note piano plink accompaniment, it seldom bodes well.

Second track – and most recent single – “Xanman” does little to ease the murk. Operating again with the ‘full-on assault’ dial turned to 11, it’s lively, and it’ll make your head nod, but in truth there’s not much to mark it out from 70’s/80’s hard rock album filler (maybe the fact the track’s name is pronounced perilously close to ‘Sandman’ is clue enough). Overlong at 5:51, it rather bashes and lurches about in a directionless fashion and there we hit on the first of two core issues with Hobo Rocket.

Where Beard, Wives, Denim was infused with a loose, slapdash confidence, brimming with truly delightful turns and burns while also managing the artful trick of staying focused inside the playful madness, Hobo Rocket‘s slapdashness feels held together by forced joins. It feels as if it were made in a hurry.

There are glimmers, however. Album highlight “Giant Tortoise” sports all the adroit hallmarks that made us marvel spring before last. By turns spry and muscular, it floats as much as it charges with adrenaline. Though no less bashed about with heavy chordage, it’s well-tempered and judiciously used, serving more as usher than the chest-beating, testosterone-drunk groom, leaving the hypnotizing, heartfelt center – it’s the album’s most emotionally open-spaced track – the chance to intoxicate. The lovely, regret-tinged hippie dream of “O Dharma,” complete with horizon-gazing guitar hook, hopeful keyboard-drenched acoustic bridge and even a sitar sneaking into the mix in the last minute, is a piece of Pond-ish wonder that will follow them into their dotage, it’s absolutely lovely.

As is, at first, “Aloneaflameaflower,” starting off all monumental and epically landscaped, Allbrook’s vocals drifting between the guitared canyon walls on a raft of keyboards and dragon-flitting drums. The thing’s got a nice rough idyll going for it until it takes us around the bend where we run rudely into the screaming, Jack Whitewater rapids and the song blows itself inside out for, seemingly, the self-destructive fun of it. And here we hit core issue number two.

On Beard.., the band distilled their influences into a blended whole that was so eager with its own energy it could hardly wait to get the songs out. What influences there were they overrode. On Hobo Rocket, they’re content to simply ride them. “Midnight Mass (At The Market Street Payphone)” comes out the gate throwing Flaming Lips confetti, the Coyned delivery indeed the sincerest form of flattery. By that point – the song’s the album closer – you’d take it, but in about a half dozen bars this too gets the Black Sabotage treatment, which wouldn’t be an issue with anyone if it weren’t bludgeoning and damn near tuneless. Marginally better is the title track, if only because it sees Pond providing one of the best songs mysteriously left off this year’s patchy-at-best Fall album Re-Mit, down even to the tetchy Saldfordian’s gargle (guest vocalist Cowboy John), thereby spinning some kind of box-inside-a-box-inside-a-box condundrum: A Can-inspired band that slavishly adopts (if just for one song) a naked stylistic cue from another Can-inspired band that themselves are doggedly unslavish in their own interpretations. I guess we can just be thankful that Pond didn’t bring Pavement into the equation.

Like that Gordian Knotted puzzler above, Hobo Rocket is in large part a trip into the headache abyss. I love this band, but that’s not the trip I was expecting to take in the wake of that last panoramic voyage. Color me perplexed.