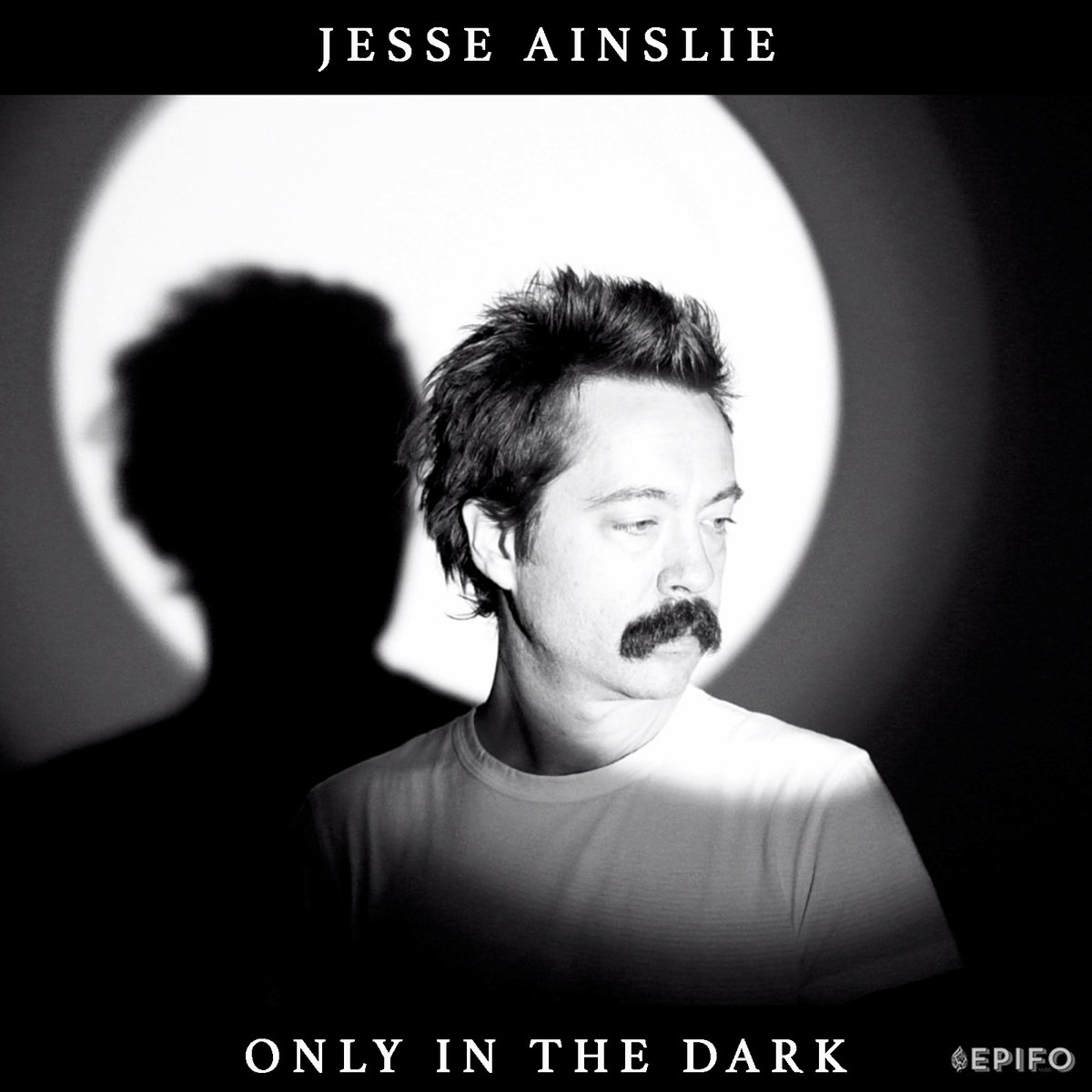 Elemental. While at its essence, of course, that word applies to, well, everything, it would seem, in terms both core and incidental, in matters thematic and theoretical, to hold especial pertinence to the work of Jesse Ainslie. Unsurprising, perhaps, when the guy’s path to solo debut Only in the Dark has included stints in such soul-plumbing outfits as Castanets and Phosphorescent but, even with that considered, it’s not often a not-far fallen apple shines with enough natal brilliance to make the tree on which it grew an instant distant memory. We’re a bit in the presence-of here, folks, you’d do well to pay heed.

LIke a tinted Americana postcard where the sound of a high lonesome organ – softly keening and constant – is the color of the sky and all that lies beneath it, foreground and back-, is shaded in the nuanced values of regret-tinged pride and loss, there is, if you’ll pardon the made-up word, an encompassment to this record. Taken as a whole – as an album should rightly be, after all – the eight tracks here evince an inherited fullness of purpose that pulls in essential strands of – at least – the Band, Townes Van Zandt, Tom Russell and Alejandro Escovedo and recasts the lot of them into a wholly singular, wholly familiar vernacular all its own. The svelte graininess of the voice, comforting no matter how sharply it parses pain, the locked-in blues of the songs’ presentation no matter how deeply rooted they are in that classicist, pre-No Depression country-rock gravel, this is Jesse Ainslie pure and clear. There is no ‘this could be that artist, this could be that artist’ interchangeability here, zero sense of a Castanets cast-off or such. Instead, it’s one of the  most assured debuts we’ve heard in a long while.

Beyond the pretty-much-perfect “Back to Texas” which SEM premiered a few weeks back, Only in the Dark offers one exhibit stacked upon another to prove that first single was no fluke. “Real Good Night” invokes the spirit of a Tex-Arkana Gun Club with its gallop of punk zest slowed to the pace of a guitar-stung ballad with its fire burning just as hard, just as real. The yearning lilt of story song “Caroline” (and, yes, they’re all story songs at their heart) brings the feel of a polished-up Basement Tapes out-take with some borrowed Blonde on Blonde-worthy piano work – courtesy creative co-conspirator James Hallawell, in whose deepest-Cornwall studio these songs were born – a similar historic texture then enrichening the plangent, jealousy-scarred rocker “The One You Love” two tracks later (which isn’t to detract from that song’s giveaway citation of both Warren Zevon and “the great great Viking Moses“). Then there’s the dread-filled “Things To Come,” the record’s by-definition most directly political cut, laced with fleeting allegory – “the world is watching but the world don’t see/the chaff rising to kill the wheat” – and seething with a swampy rage that, no exaggeration, suggests Tony Joe White possessed by the specter of David Eugene Edwards’ apocalyptic visions. Finally, closing things out, the title track cruises its way through an economy-ravaged downtown atop the power of some smart, terse tautologies and a sly but unabashed reliance on a “Sweet Jane” refrain, the all-of-that coalescing into an addictively listenable finale.

The magic at work on Only in the Dark – which is to say the raw instinctual talent – is that, regardless of tempo or temperament, every song has underlying it the simmeringness of a scorcher, as if Ainslie and this album’s crew had been supping just enough at some bruja’s table before taking to the studio. And though the end results give sound impression to what in many ways was a collaborative process – the album’s production effort, for example, was shared three ways between Ainslie, Hallawell, and bassist Jeff Crawford – it also seems clear that the direction this record took was author-driven, to the point it’s fair to say that there is now such a thing as a ‘Jesse Ainslie sound,’ poignant, biting, vulnerable, resilient, and tuneful as fuck.

While that’s undoubtedly important as he moves forward as a solo artist, what matters most is that while doing so Ainslie has fearlessly ground his work in some of the basic elements of human existence – love betrayal lust and, again, loss – using them as virtual touchpapers to ignite the fervors at play. To put it succinctly, these songs, emotionally, are as ephemeral as they are lasting, and you gotta admit, that’s a neat trick. [buy Only in the Dark here, and allow us to leave you with “The One You Love.” You can thank us in the morning]