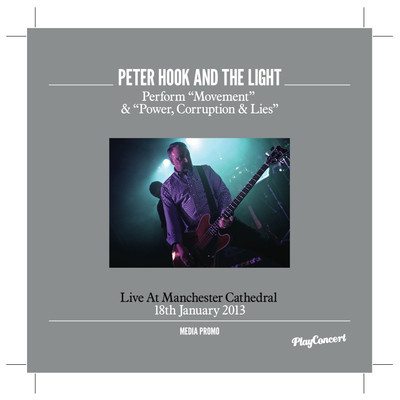 Peter Hook’s fantastic new album Live at Manchester Cathedral forms just one of the ways the Joy Division and New Order bass virtuoso has been coming home in recent years. In 2011, Hooky and his excellent band The Light revisited Joy Division’s debut album Unknown Pleasures – a record that Hooky himself, by his own admission, originally despised because of its lack of punk power – and released the great Unknown Pleasures – Live in Australia.

And in January of this year, Hooky again returned to his roots, this time as the author of the memoir, Unknown Pleasures: Inside Joy Division. We always knew that Hooky was an incredible storyteller and one of the most innovative bass players of all time, but who knew that he could also write with the same verve with which he talked and played?

Live at Manchester Cathedral continues Hooky’s journey to the past – and this time it’s New Order’s. He and The Light play two – count ’em – two New Order albums in their entirety in the city that birthed them. And, as usual with the energetic Hooky, he doesn’t rest on his laurels and simply duplicate New Order’s 1981 debut album Movement and 1983’s follow-up classic Power, Corruption & Lies; rather, he breathes new life and his own inimitable personality into them.

Movement, of course, was a transitional album, especially considering that it was made by a trio of musicians – Hook, vocalist-guitarist-keyboardist Bernard Sumner, and drummer Stephen Morris – who, as Joy Division, had honed a sound built for the voice and lyrics of singer Ian Curtis.

Curtis suddenly passed away in 1980, and the remaining three members – who now called themselves New Order – and their producer Martin Hannett knew what to do with the sound but not the vocals. Sumner ended up as the lead vocalist, but his voice wasn’t a good fit for the low-register singing of Curtis and the music that New Order had composed for Movement and its non-album singles.

So on Manchester Cathedral, it’s a thrill to hear Hooky sing the non-album singles, especially the ones for which Curtis wrote lyrics before his untimely death. Both “In a Lonely Place” and the immortal “Ceremony” sound better than they do when they originally appeared as non-album singles – largely thanks to Hooky’s deep and aged voice, which, let’s face it, is closer to Curtis’ than Sumner’s.

These two tracks open the set. But Hooky sounds equally good on the Movement tracks. From “Dreams Never End” all the way to “Denial,” he sings the dark, Curtis-influenced lyrics more credibly than Sumner did on the original record.

The Light’s contribution to the Movement set can’t be denied. They create a sound that just jumps out of the speakers. The percussion – headed by drummer Paul Kehoe – and Nat Watson’s guitar give the tracks an immediacy that the original record lacks. And Jack Bates and Andy Poole have all the right moves on second bass and keyboards respectively. The Light is a cohesive unit – just listen to the musical interchanges on “Senses,” “Doubts Even Here,” and, really, any of the tracks here.

Even though Hook & The Light as a whole work extremely well with Movement’s Joy Division-influenced material, how do they fare with Power, Corruption & Lies, the first album that, as Hooky himself has pointed out, features New Order vocals and New Order music?

New Order’s second album shows right away that they’d discovered the sound that would carry them through their classic period, right up through 1989’s Technique. Power begins with “Age of Consent,” a New Order classic that includes one of Hook’s finest bass lines and Sumner’s excellent guitars and synths. On the original, Sumner handles the lead vocal better than anything he’d done previously – and Hook doesn’t try to replicate him in the Manchester Cathedral performance. Instead, he sings the song with a punk attitude that transforms it into something new and excitingly aggressive.

“Aggressive” is perhaps the best adjective that one can use to describe The Light’s approach to the Power material, which has a raw feel that changes the record into a new work of art. Hooky’s put some Iggy into New Order – and this is a good thing.

Listening to all the great songs from this tremendous album in Hooky’s new incarnation is like hearing the album all over again. “The Village,” “Your Silent Face,” “Leave Me Alone,” underscore the record’s timelessness, and “Leave Me Alone,” in particular, is still as beautiful and melodic as it ever was but now energized by Hooky’s vocal delivery.

And what would a Movement–Power-era Light show be without the non-album singles “Temptation” and “Blue Monday”? “Temptation” rocks hard, with Watson’s guitar and Hook’s as-ever melodic bass at the core, while “Blue Monday” is simply a celebration of New Order’s awareness that the most innovative music could be catchy and accessible at the same time.

Live at Manchester Cathedral reminds us that good music never dies and that Peter Hook, after more than thirty years of making good music, is as vital as ever.