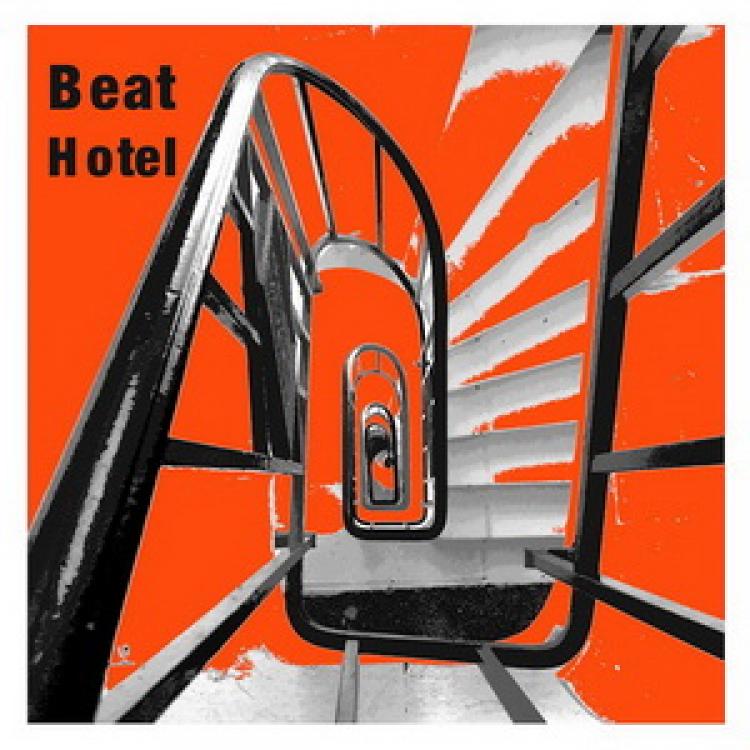 The great thing about great songwriters/bands is the way they can extract the most salient essences from some number of foregone pop moments and, with what seems an effortless panache, blend them into their own aesthetic swirl to produce something not only unique but pop powerful besides. Take “Feel It”, the lead track off the new self-titled vinyl-only mini-LP from those tightly loose-limbed sonic maestros Beat Hotel (out January 31st, 2020 on Occultaion), a track that, um, feels as if the best of those fleeting baggy years has been cross-bred by some very finely-spliced Burbankian magic with two parts of the essential germ of genius that was the Steve Marriott mode and one part of Game Theory’s slightly skewed classicism and voila!, fresh, pastiche-less pop perfection.

The work, in large part, of Paul Pascoe – the sole (soul?) author of four of these six tracks, co-credited with a fifth (a languorous – and apt – cover of of ex-Lofts member Bill Prince’s “Beat Girl” filling out the tracklist), this first full outing from the UK combo, in relaxed but adamant fashion, furthers the case should there have been any doubters that what we have here, hidden in plain sight, is one of the finer tunesmiths on either side of the Atlantic. The evidence is proliferant.

“Bury It Deep,” surging gently into life atop a rich mystery of bassline (Arash Torabi, best known ’round here for his work with both the latter-day Distractions and Granite Shore), flows and seduces like some wondrous new genus sprouting out of the rocks of the Paisley Underground, the tougher, churning “Low Slung Loser,” blessed not once but twice by two wildly precise guitar outbreaks from Stephen Brett, comes on like a thug in aspic, sporting leather and some heavy kecks even as it’s dressed in finesse, while “Heat Light Fire” closes proceedings out with a droney poise worthy of a VU/Galaxy 500 mashup. But it’s “Daddy, I Drown” that might well deserve centerpiece honors.

An emotional burner that builds on its own haunted, smoldering momentum, richly impressionistic of lyric as surely any song wishing to convey the stark surreality of witnessing a parent disappear into the ether of the other side can only credibly be, “Daddy, I Drown” adopts the stirring ballad trope and clings to it with a tenacious grace. Indeed, it’s exactly the fact of the track’s unafraid, head-on embrace of the form that underscores its courage, allows its vulnerability. Lovely and eternal, gently searing in its honesty, the song in a sense is the yin to “Feel It”‘s yang, the brimming forces of joy and sadness, exuberance and reflection, spun together as they inevitably are. Though too brief, one supposes, to be considered a song cycle, Beat Hotel nevertheless represents in its own way a kind of pop circadian rhythm, providing another example, as we’ve encountered over and over again, of the potential power harbored within that ubiquitous palindrome, P-O-P.