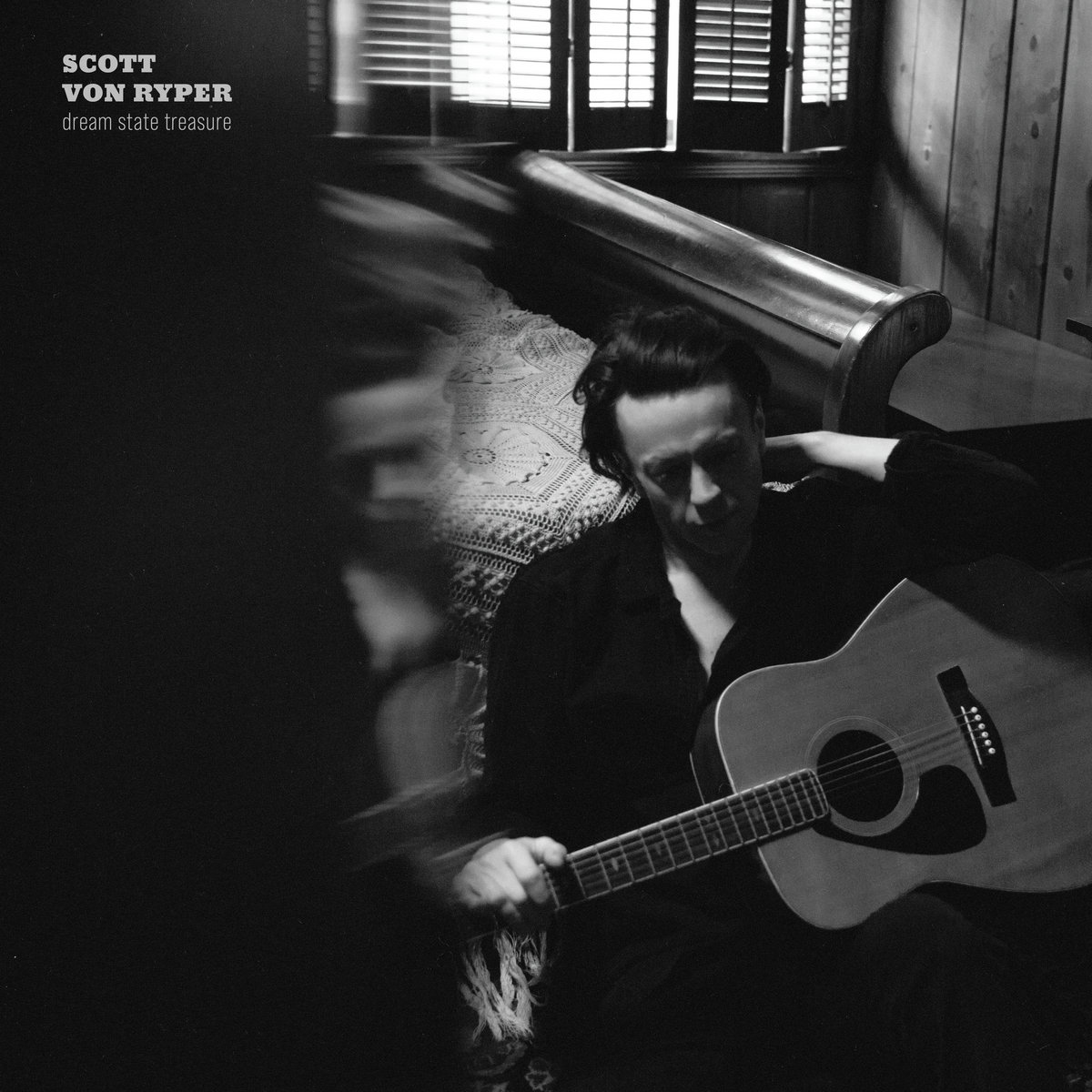 Well, y’know, records do do this on occasion, don’t they?  Come somehow out of nowhere – or at least one’s personal nowhere – emerging from the noise that seems to have become this planet’s primary element to knock you seven ways to rock’n’roll Sunday. As we all have but our own individual – and thereby limited – compass with which to navigate the vast enormity of the modern-day music universe, it makes sense that, no matter how avid or prodigious your curiosity, artists and albums that surely belong inside that gloriously messy wheelhouse of yours will continue to elude your detection. The only consolation, such as it is, is that little fillip of joy you experience when chance corrects this oversight, that sweet sudden burst of remorse and happiness that tastes a touch cathartic. So do I come to the work of Scott Von Ryper.

Though knew of the name Black Ryder it was only at a noisy gazey sideways glance, and while an ardent fan of the Jesus and Mary Chain in the way back when – saw them on their first US tour and kept current with them into the 90s – I must admit their more recent activities and iterations haven’t much attracted my attention, so the addition of a primary Black Ryder into their touring ranks went unnoticed even as now, having subjected myself to a quick crash course of that earlier, well-received project, it’s plain to hear how, as an incidental audition tape to possibly be hired on with the storied Reid brothers, riven as that material is with the breathtaking existential tussle between, basically, love and beauty and death, there could be but one applicant.

In its reverbed shadows, its melodies arcing from salvation to despair and – hopefully – back again, Dream State Treasure, released October 15th on Tran-si-ent, aches as if under a spell, Von Ryper funneling those twin currents of pain and revery into an alchemized whole, the result a blurred fatalism that refuses to submit to its darker side, or at least not entirely. One could think of it as a kind of blues, one that accumulates from countless sources forged together into a glowing black coal of doubts and regrets and too-few moments of complicated light that sits with weight at the very center of one’s soul, that sternum of desire and hoped-for release that can feel sometimes like you’ve swallowed an emotional fist. This album, to put it succinctly, is intense, beautifully so.

Soaked in longing, in utter yearning, first track “Over and Over,” with its lightly reverbed vocals atop a plaintive acoustic strum, a Hammond hanging on the periphery like sorrow’s shadow, drums eventually crashing in waves as guest guitarist (just on this song) Brent Mitzner’s solo tangles with Ryper’s in some sort of stinging, deserted shoegaze echo of each other, amounts to a calling card of almost terrifying power. There’s a momentum to it, one that gives an impression of fighting its way constantly to the surface, as if at its core lies a slightly frayed survival instinct with no quit to it. It’s a sense you may well be unable to shake over the course of the entire album.

“The Devil’s Son,” doleful and seemingly sung into the mirror, harkens a bit back to Lennon sitting at his white piano in an aura of loneliness and hoped-for resurrection, the track battened by a veritable mini-orchestra including cello and other string effects (plus a small glory of horns), the fact of it being exquisitely produced – one of the totality of credits Von Ryper gets to claim throughout Dream State Treasure – a bonus of no small consequence. The deliberate, hypnotic “Good Night Goodbye” takes ‘stately’ to subtly new heights (or depths depending on your perspective), while “Lucifer,” like a gently disturbing trance, efflorescing ever upward as if seeking its own dark side of the moon, laid into place with utmost care – at 6:26 it’s DST‘s lengthiest cut – illustrates what’s perhaps this album’s greatest asset, the artist allowing the song the room to not just breathe but to expand as needed to meet the fullness of its intent. He’s in no hurry here because he can’t be, each of these eight pieces demanding their due without stint or shortcut. There’s something of a flinty luxury to the all of Dream State Treasure that one could say rewards one’s patience but that’s never an issue here as every track, even – if not especially – the wordless “Reckoning” that closes proceedings in an epic, nuanced swirl that could serve as a soundtrack to your next epiphany, is so entirely compelling that even if the record went twice as long as its forty minute running time it would be over too soon.

As complete a piece of work as could be asked for, the treasures to be discovered in terms of shading, be they in word or sound, are inexhaustible, Von Ryper painting in memoir here and doing so, well, over and over, to a point one might wonder if he’ll ever top it. Frankly, though, we’re not worried about that which is to say we wouldn’t bet against him. He took a long path to this solo debut – The Black Ryder’s first album arrived in 2009 – but judging from the result it was a very wise, well-spent apprenticeship. Dream State Treasure is one of the year’s finest, easy.