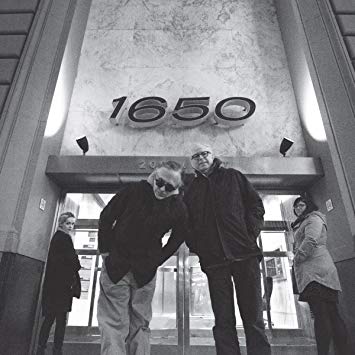 Before heading off on a six-week working sabbatical (I am so very far behind my duties as this magazine’s post-punk/darkwave editor that a duration of that length is my only hope of gaining back lost ground) I thought I’d leave you with – what else and why not? – a new column. While it’s certainly the case that much of what ends up being reviewed here at SEM (under my byline especially) isn’t exactly hot off the presses, to consider an album from two years ago is, even by those standards, rare. However, it’s certainly also the case that, like happens to anyone, we on staff frequently find ourselves hearing records for the first time that, even though they are well past their typical promo cycle, are of such mind-blowing quality that it becomes nothing less than imperative that we share them with you. That is, after all, our truest and arguably only reason for doing what we do. Sounds a tad grandiose, perhaps, but it is our mission. Hence Overdue Appreciations. It’s about time.

[And please note: Whereas the album title of this inaugural choice would, quite understandably, identify it as a sequel to 2012’s The Brill Building (itself a worthy option), Book Two stands so boldly on its own – likely due to the presence of Bill Frisell – that we’re choosing to treat it as its own album and so make no comparisons to its predecessor].

First off, you’re going to need a real nice stereo. Upgrade your speakers like you’ve been meaning to, or perhaps better yet, invest in one of those glowing tube amplifiers that can promise to deliver the deep rich tones of America’s yearning pop soul established during this country’s one true spate of halcyon days, that ephemeral, amber-hued vein of time between the fade of Tin Pan Alley – to which the newer younger songwriters of the day nonetheless faithfully clung as what other model was there – and the exuberant birth of the wild-haired mercury sound circa 1967 or so. Once you’ve got that sorted, borrow your clueless uncle’s audiophile headphones and settle in for what has to be considered one of this century’s most sublime listens thus far (and please know that a mild cringe accompanied the writing of that statement. I’m not one to lean into the clichés of hyperbole without a fight but the pure, innate, loving quality of the sound currently coursing through my ears, laying waste to my defenses, left me no choice).

Now, naturally, just to get this out of the way, there is, at first blush, a palpitating frisson created by the very prospect of musician and producer non-pareil Kramer, the acknowledged doyen of so-called ‘alternative’ rock music’s skewedly intelligent division, inviting along polymath virtuoso guitarist Bill Frisell as his only wingman and tackling the golden AM radio songbook. And in fact, whatever expectation that scenario might trigger, on that score The Brill Building, Book Two, in its way, doesn’t disappoint. While very clearly a labor of deep abiding love for the material at hand, there is, quite pointedly (and unsurprisingly, of course), nothing slavish in the treatments these songs have been given. That said – and this gets a bit tricky – one hastens to add that every track is treated with the respect it long ago earned. Kramer fully understands that these songs, pretty much standards every one of them, don’t need new life breathed into them as they are not (now or ever) in any danger of expiring. If anything, these often daring rearrangements-slash-reimaginigs confirm just how immortal, how buoyantly invincible their core structures are. Essentially, through the course of these ten outings, what one experiences is the reconciling of an intense artist’s affection for the classics that gave birth to every succeeding generation of the art form’s practitioners – the gist of that era’s melodies reside in nearly every hit song since – with the cussed, famously implacable – and restless – streak of creative self-determination with which the name Mark Kramer has always been synonymous. Aside from damn near being its own genre, The Brill Building, Book Two is also a manual of sorts of how one goes about that, and indeed one of its joys is that, while you’re listening to versions of ten songs that are as purely un-dislikeable as they come, there’s also a near palpable sense of actually hearing the process itself play out (and certainly, for the process-curious, little would be more fascinating than an album of early out-takes. Hearing these tracks progress from their definitive A to their sometimes wildly interpretive Z would be music geek nirvana).

Funny then that, with all that build-up, the tracklist would begin with the record’s closest-to-faithful cover. A plaintive, sighing shot at Simon & Garfunkel’s “America,” much of its quote-unquote similarity is a result of Kramer’s timbre falling within such naturally close range to that of its writer, as otherwise the details are devilish enough – the subtle jazz harmonics of Frisell’s accompaniment throughout, the reverberant wash of the production giving the song’s trademark hush a more nationally forlorned quality – to set it well apart even as the haunt and beauty of the thing are well cared for. And there, quite plainly, is the key to what’s at work here, the dichotomy at the heart of Kramer’s devotion, a strategy, a device, the working principle upon with TBB,BT is built, and which couldn’t be made any clearer than in the first few seconds of the next track.

Despite the many other gems the man contributed to the canon, “Solitary Man” remains, by many lights, Neil Diamond’s pinnacle, defining achievement, to the point that it’s playing unbidden in your head right now. Yet here, in its initial moments, you’d not have much of a clue until a run of notes from Frisell carves as if from glass the song’s tell-tale melody amidst an atmospheric intro punctuated by an African chant and programmed hand percussion. Whether, out of curiosity, the choice was made to propel it forward in Diamond’s career and imagine it recorded during his more expansive, early 70’s period that produced “Soolimain” and “Missa” et al, or arriving at that decision via some deeper probe of “Solitary Man”‘s intrinsic vibration, unearthing, as it were, the song’s visceral truth, it works, and in a way as transformatively convincing as, say, the Slits’ cover of “Heard it Through the Grapevine.”

On the one hand one could say, at this point, ‘But of course it works. This is Bill Frisell and Kramer we’re talking about here,’ which is well and true and could meet with no rejoinder. On the other, however, is the “Holy bejeezus!! sublime this record actually reaches, the level of profoundly understated accomplishment suffusing this entire work somehow exceeding the sum of its living legend parts (of Frisell I’m tempted to say something outlandish such as ‘the connoisseur’s Ry Cooder’ but I hesitate because it wouldn’t give either man his due yet even letting that phrase out of the bottle for a second, I suspect, gives a sense of what is meant). That errant parenthetical aside, the guitarist’s lines and phrases on this project have an eerily exacting presence to them, inhabiting the canonical essence of these songs’ melodies in ghostly parallel, their familiar sinews and outlines made ringingly fresh. Of Kramer what can be said except that, despite and beyond all previous evidence – his work with Jad Fair, those early rounds with Ralph Carney, himself a well-versed pop historicist, recognizing in Low the emergent flow of hooks seeping through the framework, etc etc – should anyone have still harbored any doubt that the pop world is indeed his oyster, The Brill Building, Book Two is guaranteed to dispel such doubts, each of its tracks its own (if you will) peculiar pearl, polished to a Kramerian luster.

Whether it’s giving “My Little Red Book” a punched-up vibe to rival Love’s version while adding in the Maoist zing its title has always begged for, bathing “Pins and Needles” in lush MOR tonalities, the soft-pad shimmer of a reverbed electric organ lapping ashore in constant waves, or stripping “Here Comes the Night” of Van’s teenaged puckish bombast – glorious though that surely is – and replacing it with the painful iridescence of lovelorn regret, the type you have when passion still lingers like a streetlight above the sight of your ex on someone else’s arm, there’s something of the devotional radiating off the work here, a word that, as always, translates to ‘deeply, deeply personal,’ marrow-deep, an impression nowhere clearer than on the trembling, translucent – and to me, now quintessential – take on “Crying in the Rain.”

Already, from conception, a pop tearjerker of the first water, this reading – its (pardon me) crying filigrees of guitar, the bass’s bittersweet, lonely lows, the way the strings creep in, pervasive as mist, and my lord the vocal, wounded vulnerable and grimly stoic all at once, a one-voiced tenor harmony of American hurt – could easily be put forward as the most moving piece of music Kramer’s ever signed his name to, as artist or producer. Though the question was tossed around briefly above, should the idea still persist that the guy is too shrewd or perhaps too cynical or, I dunno, too cerebral to display genuine heart-on-the-(sopping wet) sleeve emotion, please, I implore you, step this way. Won’t a one of you leave the house dry-eyed.

None of which, of course, was the point or purpose behind making this album (for that see the word ‘devotional’ a few lines prior and anyway, Kramer, by this point particularly and really since ever, cannot, one assumes, have much need to convince anyone of anything). As a listener, however, The Brill Building, Book Two‘s most significant achievement might well be the fresh perspective it provides of the artist at the center of it. By throwing open the door, in the way he has, to this parade of classics, a bright thrill of light comes slanting in that gives illuminating contour to the long arc of Kramer’s career. Not many of us would have taken out our pop protractors and drawn a parabolic link from Bongwater to Ellie Greenwich, Goffin/King, and Bacharach/David, but now, in a sense, it all, well, makes sense. Besides all that, though, putting in the simplest terms, what a listen. I’ve said it before and this album says it again, we were lucky being born when we were.